Chelsea Football Club is launching a campaign to fight anti-Semitism in football, targeting fans as well as players and the club’s support staff.

The long-term initiative begins on 31 January at Chelsea’s Premier League game against Bournemouth and forms part of what the club describes as “on-going inclusion work”, through the Chelsea Foundation’s Building Bridges campaign. The initiative is supported by the club’s owner, Roman Abramovich. 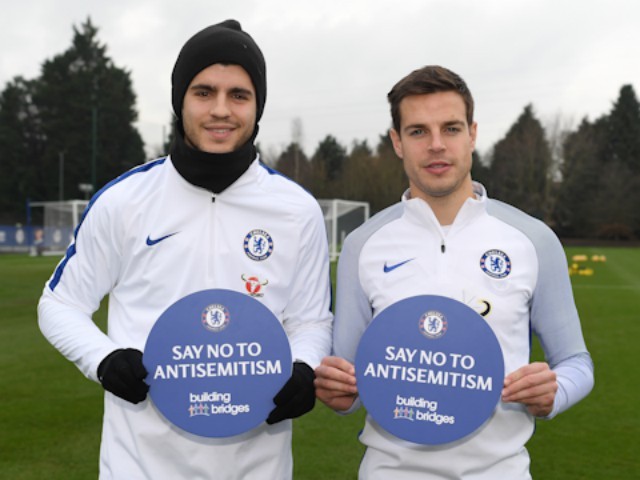 Chelsea Football Club wants to raise awareness of and educate players, staff, fans and the wider community about anti-Semitism in football.

The move follows anti-Semitic chants by Chelsea FC fans during their win at Leicester last September that were condemned by the club.

As Breitbart Jerusalem reported, on that occasion blues supporters repeated a song about Alvaro Morata previously used to abuse London rivals Tottenham, who have a large Jewish fanbase.

“Alvaro, Alvaro. He comes from Madrid. He hates the f****** Yids,” sang Chelsea supporters at the King Power Stadium.

“The club and the players appreciate the fans’ passionate support away from home, of course,” Chelsea head of communications Steve Atkins said in that game’s aftermath. “But the language in that song is not acceptable at all.”

The club also took to Twitter to address the problem:

The club’s new initiative came with a formal statement by the club:

Everybody at Chelsea is proud to be part of a diverse club. Our players, staff, fans and visitors to the club come from a wide range of backgrounds, including the Jewish community, and we want to ensure everyone feels safe, valued and included.

Through the campaign, we will be working with organisations and individuals at home and abroad, including the Holocaust Educational Trust, the Jewish Museum, the Community Security Trust, Kick It Out, the World Jewish Congress and the Anne Frank House.

As part of the initiative,the Chelsea Foundation’s equality and diversity workshops in primary schools will be extended to talk specifically about Jewish faith and culture.

Other additional activities include educational visits to former concentration camps for staff, fans and stewards, an exhibition at the Chelsea Museum on football and British Jews and screenings of Liga Terezin – a documentary about a football league run from a concentration camp during the Holocaust.

The club hopes to welcome Holocaust survivor, Harry Spiro, to Chelsea to share his and his family’s story.