JONIŠKIS, Lithuania — I first learned about my paternal great-grandfather, Boruch (Boris) Poliakovsky, when I was eight years old and had to write a family history for a third-grade assignment.

Baruch survived the First World War only to die in 1919 in the global influenza epidemic, which spurred his widow and four children to leave for South Africa.

Ironically, had he survived, they all likely would have been murdered in the Holocaust. I would not be here.

The town of Joniškis — Yanushok, in Yiddish — became a kind of mythical place to me, one I was never quite sure actually existed. During my seven-year sojourn in South Africa, I saw old sepia photograph of the town in a Jewish historical calendar. It looked hopelessly rustic, ramshackle, and poor — not unlike the shacks of the squatter camps where I tutored students in Cape Town’s formerly black townships, kids who still did homework by candlelight.

But with the advent of Google Maps, it became rather easy to find Joniškis on the map. And Google’s “Street View” feature even allowed me to wander, virtually, around the contemporary town, which sits just south of the Latvian border.

I began to entertain thoughts of actually visiting the place, though the opportunity never came until the March of the Living invited me to cover their annual Holocaust memorial in Poland, and I added an early side trip.

I spent weeks scouring the Internet for information about the historical Jewish community there. (There are only two Jews living in Joniškis. Lithuanian collaborators working with the Nazis executed hundreds of men, women, and children in mass graves in the forest southwest of the town in 1941.) I discovered that there are two beautiful, restored synagogues, “Red” and “White,” that survived the war as well as the communist nightmare that followed.

I also found out that the town’s Jewish cemetery still existed, and I wondered if Boruch Poliakovsky’s grave still stood there.

A photograph of the headstone survives in family photo albums, but no one had ever visited it — not since Boruch’s seven sisters were killed with their community, and not since a cousin, Yechezkel Pulerevitz, was deported to the gulag by the Soviets on the eve of the Nazi invasion (which also, ironically, saved his life).

A woman named Yael Driver had been there twenty years before, and had left written directions to the cemetery on the Internet, as well as her email address. I searched for days on Google Maps until I was certain I had found the cemetery.

Meanwhile, I had contacted the Lithuanian embassy in Washington, D.C., which put me in touch with Consul General Darius Gaidys, who graciously connected me with several knowledgeable local historical guides.

As luck would have it, Yael Driver replied to my email. While most of the headstones at the center of the cemetery were broken and illegible, those around the edges had survived in better condition. She told me that my great-grandfather’s headstone was still standing, according to her records. Or at least it had been, twenty years ago. So I felt that I had a decent chance of finding Boruch Poliakovsky’s grave, assuming nothing else had happened to it.

The day for the trip finally came. After a long flight from Los Angeles to London, and a short hop to Riga, Latvia — much closer to Joniškis than the Lithuanian capital, Vilnius — I set out on the hour-long drive south.

The brown Latvian landscape gave way, almost instantaneously, to green meadows after the Lithuanian border. And there, at the roadside, was a sign to Joniškis — as if it were any ordinary place, not an imagined artifact of old family lore.

The town is rather charming and picturesque, and it was a thrill to drive into it on a warm spring afternoon — to see children walking home from school or riding bicycles with their parents. I felt a thrill as I saw the spires of the White Synagogue jutting out from behind the buildings that obscure it from the street (and which, for that reason, probably saved it from destruction). 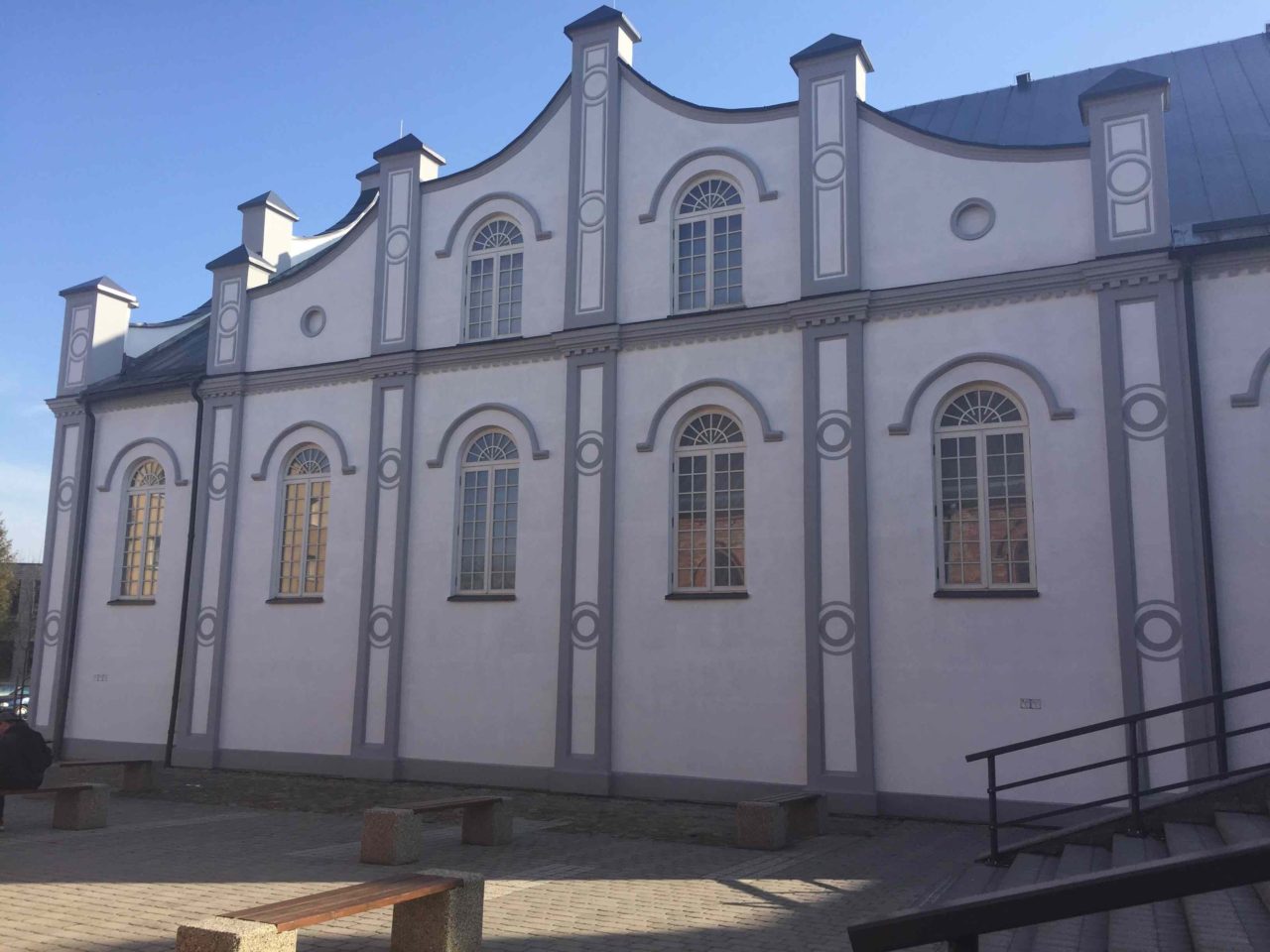 I pulled into the hotel parking lot — the only one in town — and met my guides. We toured the two synagogues, a group of five in all — two guides from the nearby town of Žagarė, who work in the  local parks department, and two from Joniškis itself, all fascinated by local Jewish history.

They explained to me that one synagogue had been used in summer and one in winter. I countered with the joke about every Jew needing two synagogues — one that he goes to, and one in which he refuses to set foot. (I am not sure they understood.) 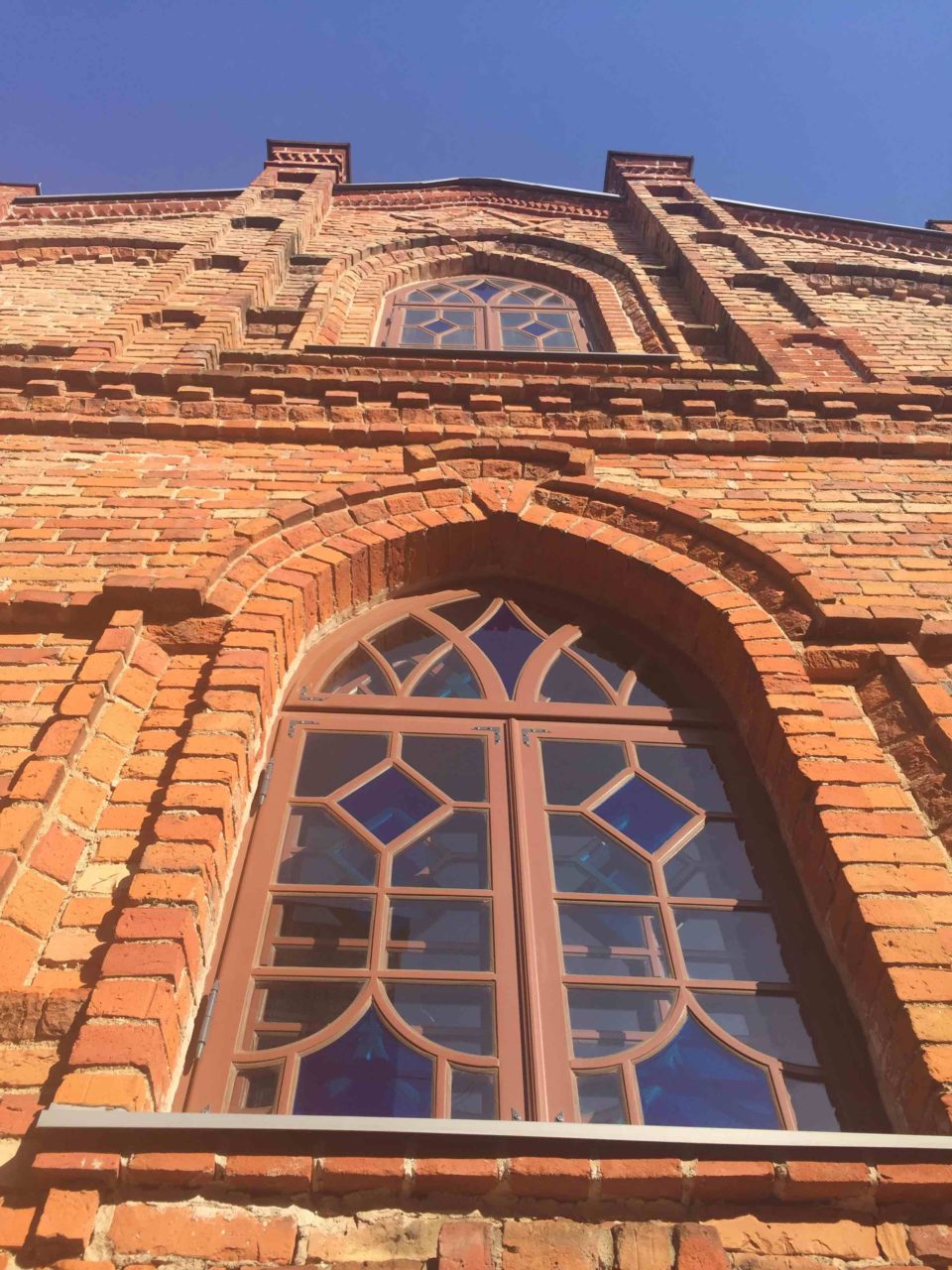 By then, it was 6:00 p.m., and I was anxious to visit the cemetery before nightfall (shortly after 8:00). Once, the little road to the cemetery was a dirt road. It is now paved — but the last fifty meters or so, which run into a field, were still dirt, and fairly muddy.

We decided to take our chances, and drove carefully through the soft ground, parking just outside the equally muddy private driveway of the rustic house that abuts the cemetery itself.

We entered the cemetery and began to search for the grave across the marshy ground. Many of the headstones were so broken and worn away that they could not be read at all. 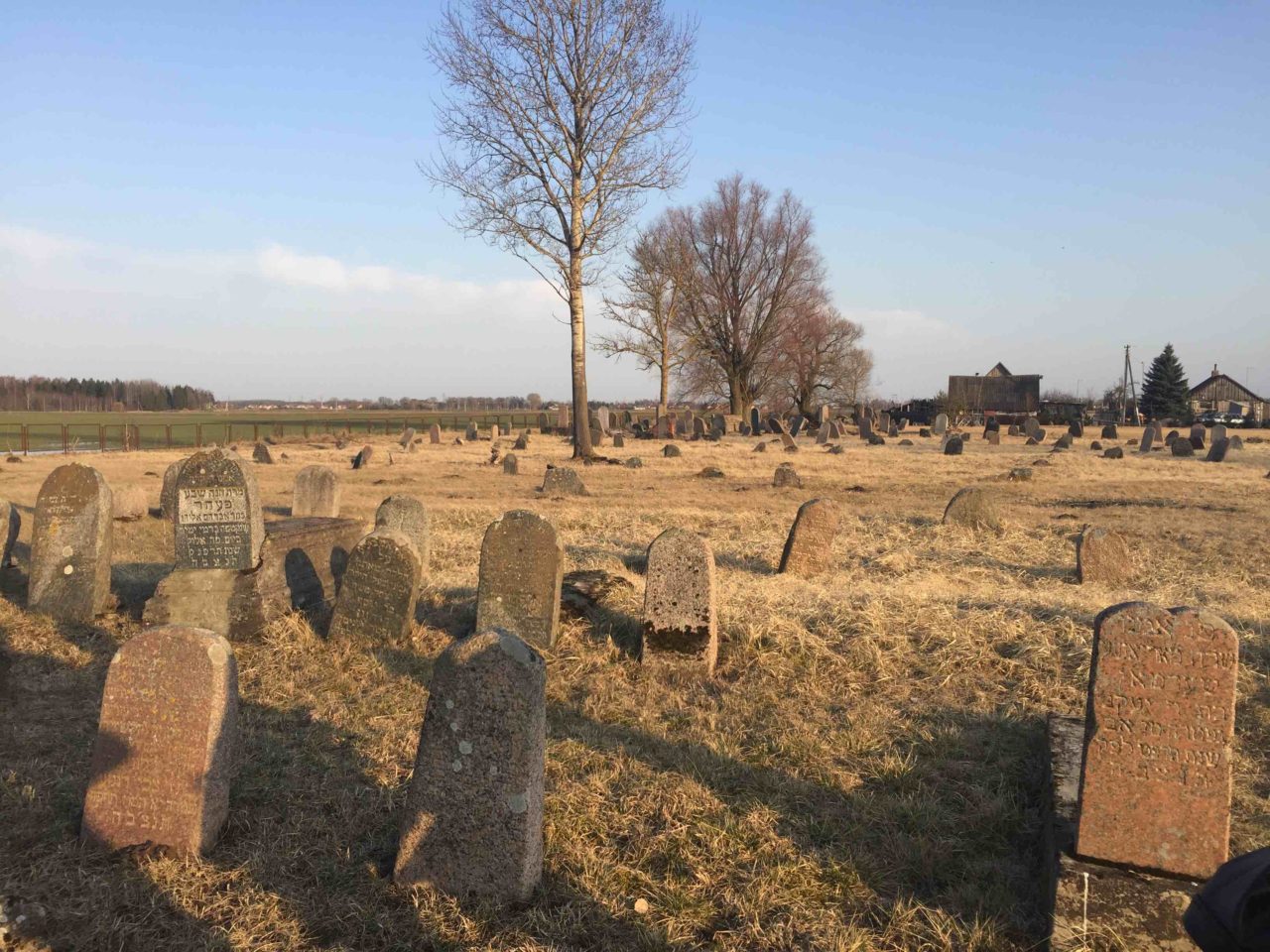 Some markers were legible, and some epitaphs rather moving.

I knew what my grandfather’s headstone looked like from the family photograph — which, conveniently, I had left at the hotel. But my guides could not help me; knowledgeable as they were, they could not read Hebrew.

I trudged back and forth from one corner of the cemetery to the other, poring over the faint and fading inscriptions. After I began revisiting the same headstones, I thought to call my wife and my parents back in the U.S. — what did we do before cellphones — to ask them to text me the photo of the headstone, rather than dragging my guides back to town. I also studied Yael Driver’s email: she had seen Boruch’s grave to the left of the entrance. But I did not.

It dawned on me that perhaps my great-grandfather’s grave simply had not survived another twenty years. I had thought to enjoy the blessing — so rare among Jewish descendants of these devastated communities — of having a real grave to visit. But perhaps, like so many other Jews, his grave had slipped into memory.

Perhaps that was fitting, in a way. At least I knew he was buried there — somewhere.

We turned, after more than an hour, to leave.

Our driver pulled into the private driveway to turn around — and there she encountered the irate, half-naked owner of the house, a man with a forest of white facial hair and a giant beer belly and who burst outside, yelling curses.

She put the car into reverse — and promptly sank deep into the mud, her wheels spinning. Now the man was even more furious, and she argued back at him while at the same time phoning her husband, frantically, for help.

I apologized to my guides for putting them into this predicament. One suggested that we pass the time by making one last search through the cemetery, as the sun began dipping below storm clouds to the west.

I agreed, and as we walked back past the sign that reads “Ancient Jewish Cemetery,” I told her about how my great-grandfather’s death seemed to suggest that there might sometimes be a reason that bad things happen, though not apparent at the time.

Just then, in front of us, I saw a shape that matched the shape I had seen in the photograph. The color was wrong — red, instead of black — but from behind, the sloping shoulders of the headstone seemed familiar.

I walked to the front and tried to read it, though the surface was covered with green-gray lichen. I made out the Hebrew letters of the surname “Poliakovsky” and realized that this tilting stone, which I had passed over at twice before, was the one. 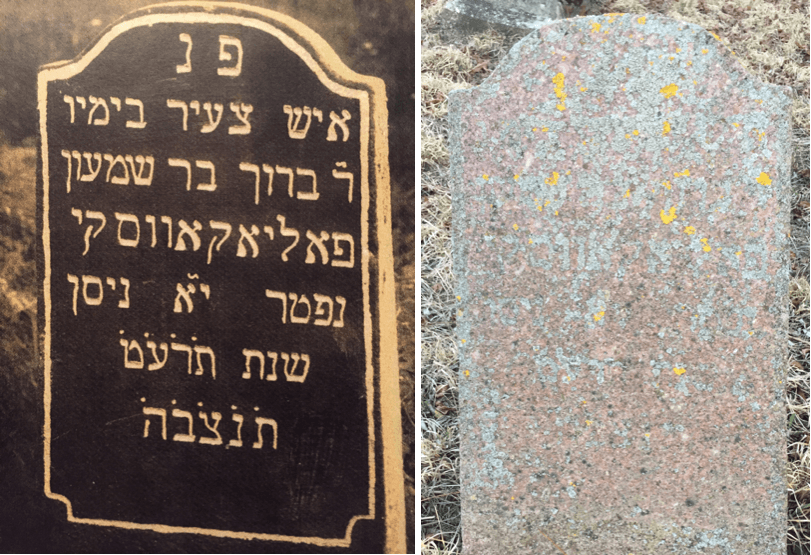 I was so thrilled to find it that I forgot the heavier thoughts I imagined, in advance, I would have at my great-grandfather’s grave. I tried to make a rubbing of the headstone with the tracing paper and graphite block I brought with me, but the lichen had anchored themselves so firmly in the grooves of the granite that it was futile.

I had already laid the traditional visitors’ stone on the entrance to the cemetery, when I had despaired of finding his grave. So I retrieved the yellow tulip I had placed, moments before, on a nondescript grave beside a shattered tombstone as something of a memorial to the community as a whole. I placed the tulip in a patch of earth below my great-grandfather’s headstone, and I took it all in.

Here he was: the man who, in dying, made all of our lives possible. I pulled out my phone and recited Psalm 42: “[M]ay His resting place be with me, a prayer to the God of my life.” (9)

Just then, the other guides began waving frantically to us. They had extracted the car from the muck: it was time to make our escape. I said a last goodbye and joined the others.

As we pulled away, back to the main road, arcs of lightning shot across the sky. The heavens were about to open, soaking the countryside — and the cemetery. A few minutes more and the soggy ground would have been completely impassable.

Somehow, it had all worked out.