NEW YORK — In a letter obtained by Breitbart News, Rep. Joe Wilson (R-SC) confirmed an “extensive outreach campaign to both Democrats and Republicans” when his office put together the official House delegation that attended the U.S. Embassy opening in Jerusalem.

Despite efforts to create a bipartisan delegation to attend the Jerusalem embassy opening, not a single currently serving Democratic lawmaker joined the trip to Israel for the inauguration.

The trip was approved, pursuant to the normal practice of the House Armed Services Committee, only after an extensive outreach campaign to both Democrats and Republicans. Despite contacting numerous Democrats about the trip, no offices accepted my invitation to attend this historic event. We always try to conduct foreign trips in a bipartisan way because strong American leadership on the world’s stage should unite us all.

This was the second confirmation from Wilson that his office reached out to Democrats to attend the Jerusalem embassy opening.

On Wednesday, Wilson told this reporter in an interview that he personally called several Democratic Congressmen himself and says he was told by each one that they could not attend. 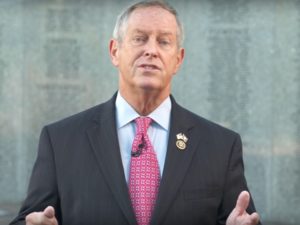 Besides failing to attend the Jerusalem embassy opening, Democrats were also a no-show for an Israeli embassy celebratory event in Washington several hours after the U.S. Embassy opening ceremony in Israel.

Wilson’s comments followed a letter earlier this week from Democratic members of the House Foreign Affairs Committee addressed to Friedman complaining that they received “no invitation from the White House to participate in the official delegation to visit Jerusalem for this moment of historic occasion.”

The Democrats were in turn responding to an interview with the Axios website last week in which Friedman said he “was very concerned that no Democrats showed up.”

However, according to Wilson, the Democratic authors of the letter are being disingenuous as Friedman was not involved in organizing the official Congressional delegation. As the organizer of that delegation, Wilson explained that his office invited Democrats as well as Republicans.

Friedman, meanwhile, doubled down on his concern about the alleged drop in Democrats’ support for the Jewish state during an interview published Thursday with the Times of Israel.

“But bipartisan does not mean finding the lowest common denominator and pursuing that just in a blind effort to find consensus,” he added. “The argument that I hear from some Democrats that Republicans are seizing the pro-Israel mantle is true, to a certain extent. There’s no question Republicans support Israel more than Democrats.”

Friedman continued: “Just because you want to make something bipartisan doesn’t mean that it becomes bipartisan… Democrats can say, ‘We want to be bipartisan on Israel,’ and I wish them every success in doing so. But there is a large Democratic constituency right now that is not pro-Israel. They have to acknowledge it, and they have to fix it, or try to fix it.”