Pope Francis celebrated an outdoor Mass in Abu Dhabi Tuesday with the attendance of an estimated 170,000 faithful, by far the largest Christian worship service ever held on the Arabian Peninsula.

At the apex of his historic three-day visit to the United Arab Emirates, the pontiff told the faithful to be “oases of peace” during his homily, in which he also urged them to live by the Beatitudes preached by Jesus. 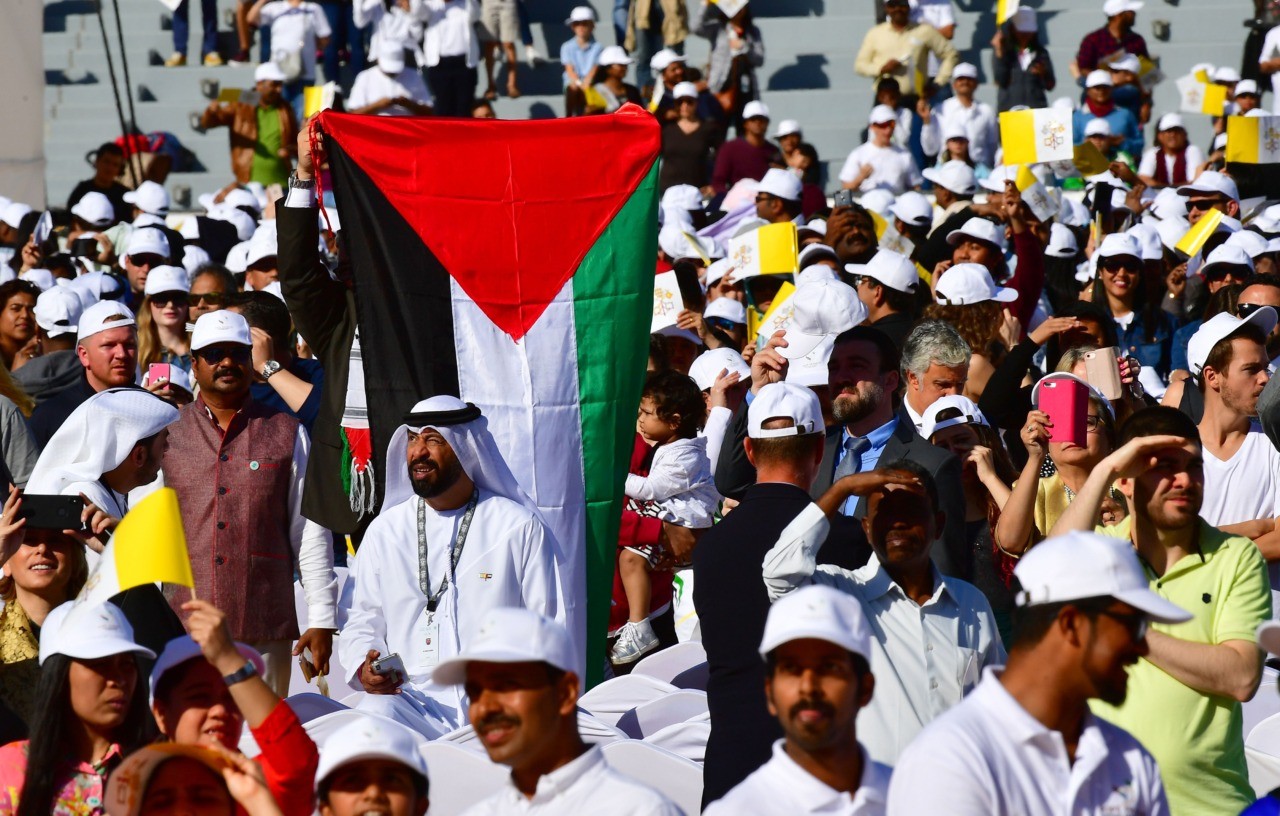 A worshipper carries the Palestinian flag during mass, led by Pope Francis, for an estimated 170,000 Catholics at the Zayed Sports City Stadium on February 5, 2019. (Photo by Giuseppe CACACE / AFP) (Photo credit should read GIUSEPPE CACACE/AFP/Getty Images)

Francis has become the first pope in history to visit the Arabian peninsula, the birthplace of Islam and home to the Muslim holy sites of Mecca and Medina.

In an Arab land where public displays of non-Islamic beliefs are severely restricted, the broadcasting of Christian hymns over loudspeakers proved a milestone and seemed to back claims of religious tolerance by the Emirates, where conversion from Islam is still punishable by death.

Cheers erupted inside and outside the Zayed Sports City stadium upon the arrival of the pope, who passed through the crowds in his popemobile, in the midst of chants of “Viva il Papa” and “We love you!” 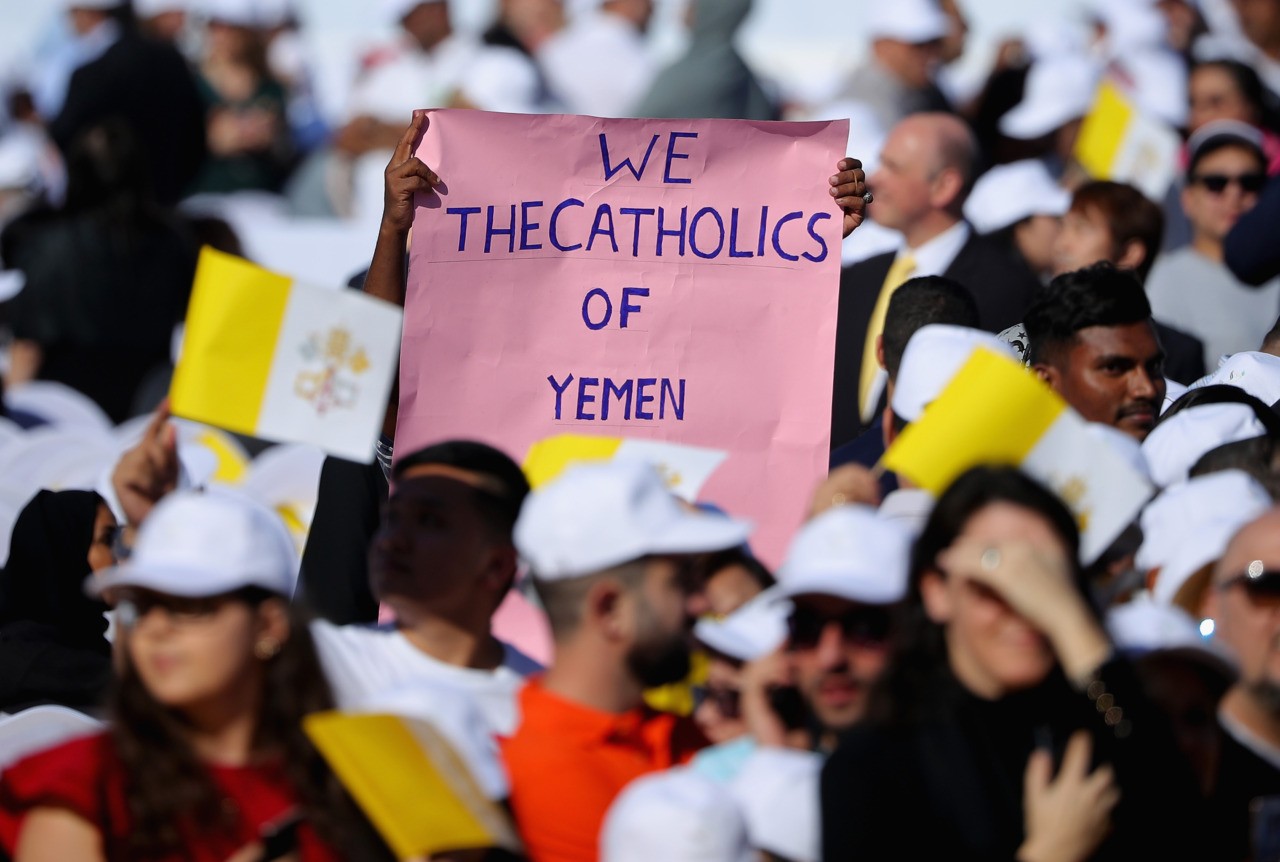 ABU DHABI, UNITED ARAB EMIRATES – FEBRUARY 05: Worshippers wait for the arrival of Pope Francis to celebrate Mass at Zayed Sport City on February 5, 2019 in Abu Dhabi, United Arab Emirates. Pope Francis will visit the UAE this year for a landmark, three-day visit. It will be the first time that a Pope has ever come to the United Arab Emirates. (Photo by Francois Nel/Getty Images)

According to the organizers of the service, the faithful attending the Mass were mostly foreigners, hailing from 100 different countries.

In his homily, the pontiff acknowledged the sufferings endured by many of the congregation.

“To live the life of the blessed and following the way of Jesus does not, however, mean always being cheerful,” Francis said. “Someone who is afflicted, who suffers injustice, who does everything he can to be a peacemaker, knows what it means to suffer. It is most certainly not easy for you to live far from home, missing the affection of your loved ones, and perhaps also feeling uncertainty about the future. But the Lord is faithful and does not abandon his people.”

On Monday, the pope met with Emirate leaders and signed a joint declaration together with Sheikh Ahmed el-Tayeb, the grand imam of Cairo’s Al-Azhar University, condemning “acts of murder, exile, terrorism and oppression” carried out in God’s name.

We “resolutely declare that religions must never incite war, hateful attitudes, hostility and extremism, nor must they incite violence or the shedding of blood,” the document reads. These tragic realities are the consequence of a deviation from religious teachings.” 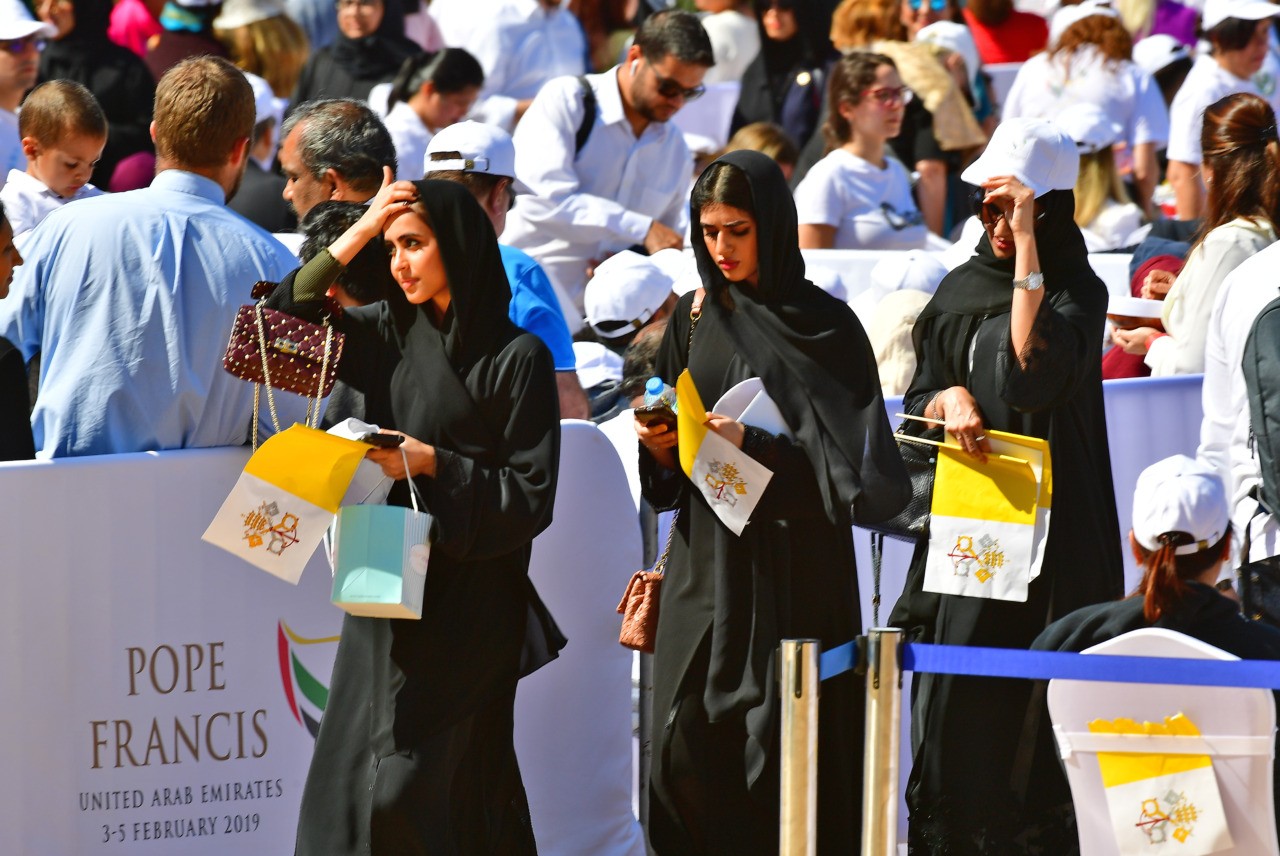 “We thus call upon all concerned to stop using religions to incite hatred, violence, extremism and blind fanaticism, and to refrain from using the name of God to justify acts of murder, exile, terrorism and oppression,” the text declared.

This declaration also highlighted a “a distancing from religious values” as one of the most important causes of the crises of the modern world, giving way to “materialistic philosophies that deify the human person and introduce worldly and material values in place of supreme and transcendental principles.”