France is marking its first national day of commemoration of the Armenian genocide on Wednesday, a remembrance of the more than 1.5 million Armenians who were systematically exterminated between 1915 and 1923 under the Ottoman Empire.

The event fulfills a pledge made by French President Emmanuel Macron on his election and has angered the Turkish government. France’s recognition of the massacre as a genocide was enshrined in law in 2001, following a lengthy struggle that has strained relations with Turkey, however now Macron has moved it to the forefront of French political life.

Armenia and Turkey have been at odds for decades over whether the World War I killings and deportations – which Armenia says left 1.5 million dead – should be described as genocide.

Historians regard the mass killings of Armenians a century ago as the first genocide of the 20th century. Turkey rejects the term ‘Armenian genocide’ as inflammatory, contending that those who died were victims of civil war,  and has repeatedly suggested the numbers of deaths were fabricated and exaggerated.

Every year, on the eve of the #ArmenianGenocide #Remembrance Day, young people across @Armenia gather in #Yerevan, marching to the #Genocide Memorial with torches in the memory of the victims of the Genocide. #NeverAgain pic.twitter.com/aSVgh5NvsB

Macron’s announcement in February that France would officially commemorate the slaughter drew an angry response from Ankara, with a spokesman for Turkish President Recep Tayyip Erdogan angrily declaring: “No one can sully our history.”

Last week Turkish Foreign Minister Mevlut Cavusoglu chided France during a tense exchange of words with a French parliamentarian at a NATO meeting in Turkey.

Cavusoglu said: “France is the last country to teach Turkey a lesson on genocide and history. We haven’t forgotten what happened in Rwanda and Algeria.”

French lawmaker Sonia Krimi and the French delegation left the room in protest over Cavusoglu’s remarks.

“When the arrogant @MevlutCavusolgu gives you lessons on arrogance and politeness, arrogantly and without any respect,” she wrote on Twitter referring to the incident. 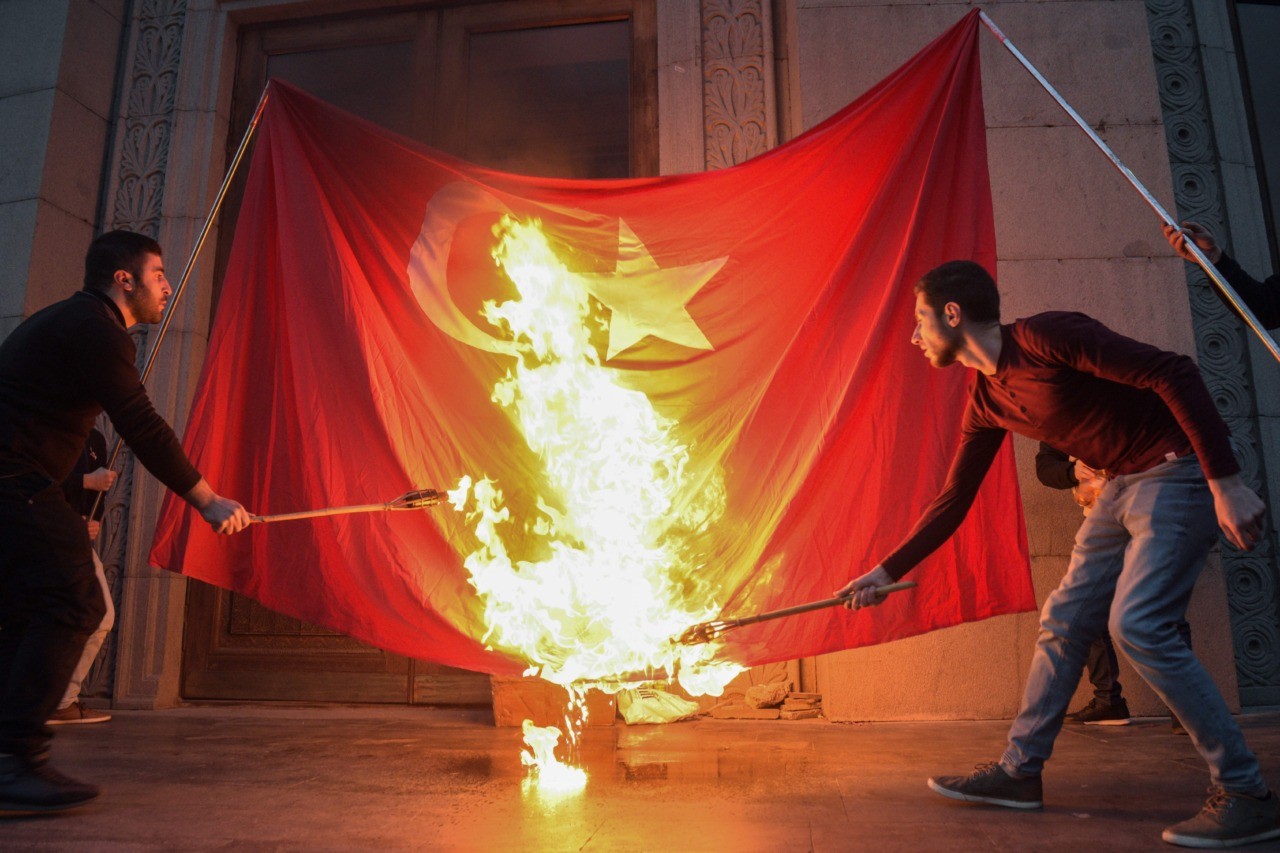 Men burn a Turkish flag ahead of a torchlight procession as they mark the anniversary of the killing of 1.5 million Armenians by Ottoman forces, Yerevan, April 23, 2019. (KAREN MINASYAN/AFP/Getty Images)

“Neither their colonial past nor their self-centred present guarantees their moral superiority,” he wrote.