The artist and cartoonist who founded the Cartooning for Peace charity, told AFP the newspaper was wrong to remove the offensive drawing by Portuguese illustrator Antonio Moreira Antunes from its site.

“Humour and unsettling images are part of our democracy,” Plantu said.

Not having cartoons was “as stupid as asking children not to do drawings for Mothers’ Day,” he added.

Plantu’s attack on the NYT follows its move to self-censorship after the global uproar sparked by publication of a widely denounced antisemitic caricature of Israeli Prime Minister Benjamin Netanyahu.

The cartoon, published in April during the Passover holiday, depicted Netanyahu as a dog wearing a Star of David collar and leading a sightless U.S. President Donald Trump — who was wearing a Jewish skullcap. See below: 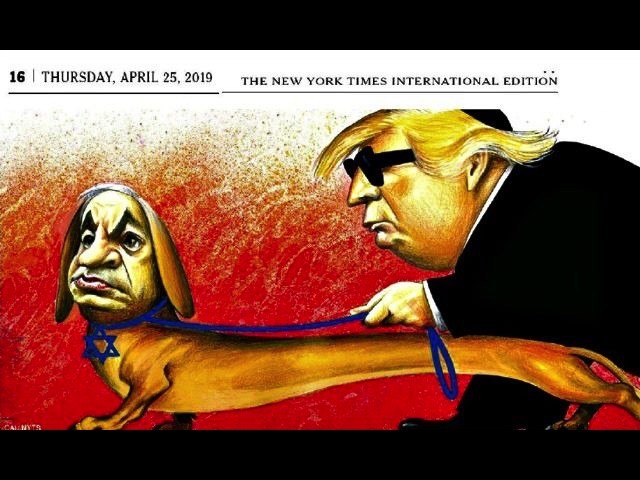 Editor James Bennet explained the paper had planned for a year to cease running political cartoons in the international print version of the Times, in line with the U.S. edition.

The change begins on July 1, Bennet said in a Monday statement.

New York Times publisher A.G. Sulzberger announced in May the editor who published the original cartoon would be disciplined.

Plantu, chief cartoonist of France’s Le Monde daily, said he was “worried about the future of our democracies and freedom of opinion” adding “one cannot imagine a newspaper without political caricatures.”

Patrick Chappatte, one of the Times’ leading cartoonists, said the newspaper’s decision was directly related to the Netanyahu cartoon.

THE NEW YORK TIMES WILL END ALL POLITICAL CARTOONS I just learned, weeks after they published a syndicated Netanyahu cartoon that caused a scandal. For me, this is the end of an adventure that began 20 years ago. But the stakes are much higher. READ HERE: https://t.co/o8y43v88Yd pic.twitter.com/NBH0uyw9Jf

He condemned the publication of that caricature but said he was concerned media outlets were increasingly buckling under political pressure and criticism from “moralistic mobs” on social media.