At least two Afghans died Sunday when a riot broke out in their rescue camp on the Greek island of Lesbos as illegal migrant numbers surge once more across the Mediterranean.

Athens News Agency, quoting police sources, reported a woman and a child had died in the blaze at the Moria camp. The body of the woman was taken to the island’s general hospital while the body of the child was handed over to authorities by migrants.

The fire inside the camp was extinguished by plane. But police later fired tear gas to control an angry crowd who said authorities took too long to respond to the incident, according to an AFP correspondent.

The death toll, however, was unclear with an Afghan migrant eyewitness saying three people died as a result of the fire that spread to six or seven containers used to house residents.

In a statement, police said the riots occurred after two separate fires broke out, firstly outside and then inside Moria camp with a time gap of 20 minutes. 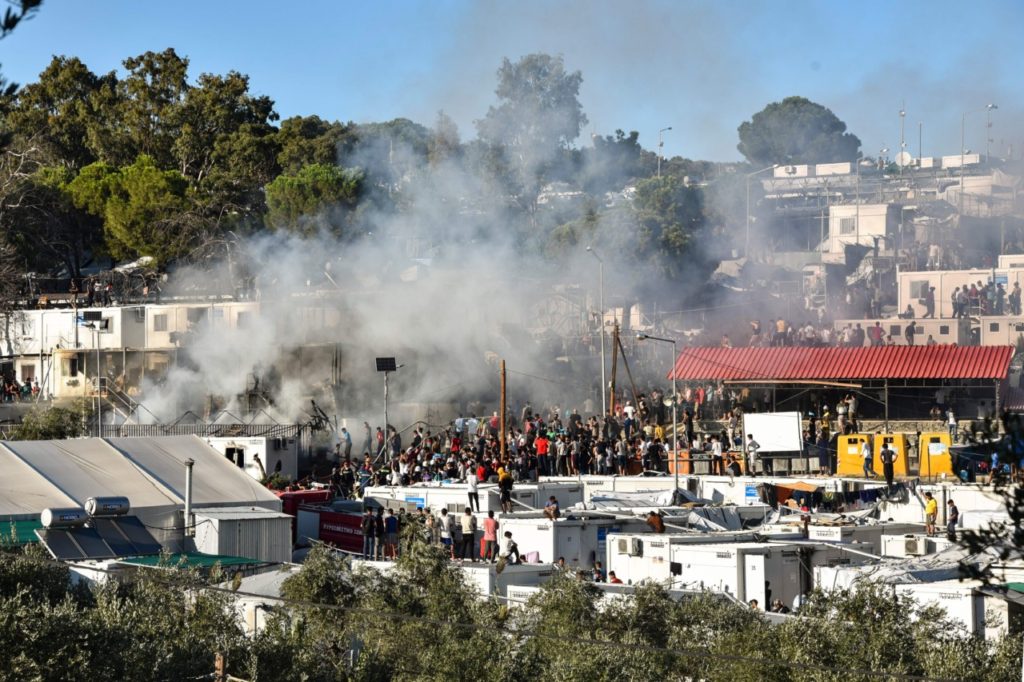 Refugees and migrants try to escape the camp of Moria after a fire broke out in the camp in Mytilene on September 29, 2019. (FABIEN PERRIER/AFP/Getty Images)

Additional officers were sent from Athens in C-130 army planes in a bid to contain the situation, although local police sources said calm had returned to the camp by 2300 GMT.

The Deputy Minister of Citizen Protection Lefteris Economou, along with the Chief of Police and the Secretary General for Migration Policy, are due to visit.

Lesbos, Greece’s third-largest island, is a magnet for migrant traffickers along the Turkish coast who aim dinghies at the island’s flat northern coastline or at the seafront lights of its international airport.

Third Day of Clashes Between Greek Police and Migrants Trying to Force the Border https://t.co/HVAI6BquE6

The number of illegal migrants landing right across Greece, numbered in the hundreds of thousands at the height of the migrant crisis, is surging upwards once more, as Breitbart News reported.

Greece admits that it doesn’t have the capacity to accommodate so many on the islands and its government has said it will discuss a new asylum law to deal with the migrant crisis.

The country hosts about 70,000 Syrian refugees and migrants who have fled their homeland since 2015.

Minister of State George Gerapetritis said on local television on September 29 that migrants should be sent to camps with humane conditions.