BEIRUT (AP) — Hundreds of Lebanese protested Sunday in the country’s capital and other areas over an economic crisis that worsened over the past two weeks, with worries over dollar-reliant Lebanon’s local currency losing value for the first time in more than two decades.

Lebanon is facing a deep-running fiscal crisis as it staggers under one of the highest debt ratios in the world, at $86 billion or more than 150% of the country’s gross domestic product.

Many of Sunday’s protesters in downtown Beirut blamed Lebanese political leaders for the widespread mismanagement and corruption.

The protesters gathered shortly before noon in the central Martyrs Square, then marched toward the government headquarters where riot police were deployed.

“The people want to bring down the regime,” some of the protesters chanted as riot police stopped them from marching toward the government headquarters. The slogan echoed that of the so-called Arab Spring uprisings of 2011.

Other protesters chanted “peaceful” and tried to stop the young men who clashed with security forces.

“They should leave power because of their failure in running the country,” a protester told a local TV station. “They have turned us into poor people.”

Another protester, a woman, said she has a master’s degree and has been jobless for three years, a hint that only people linked to politicians get state jobs and many private companies are laying off staffers because of the crisis. 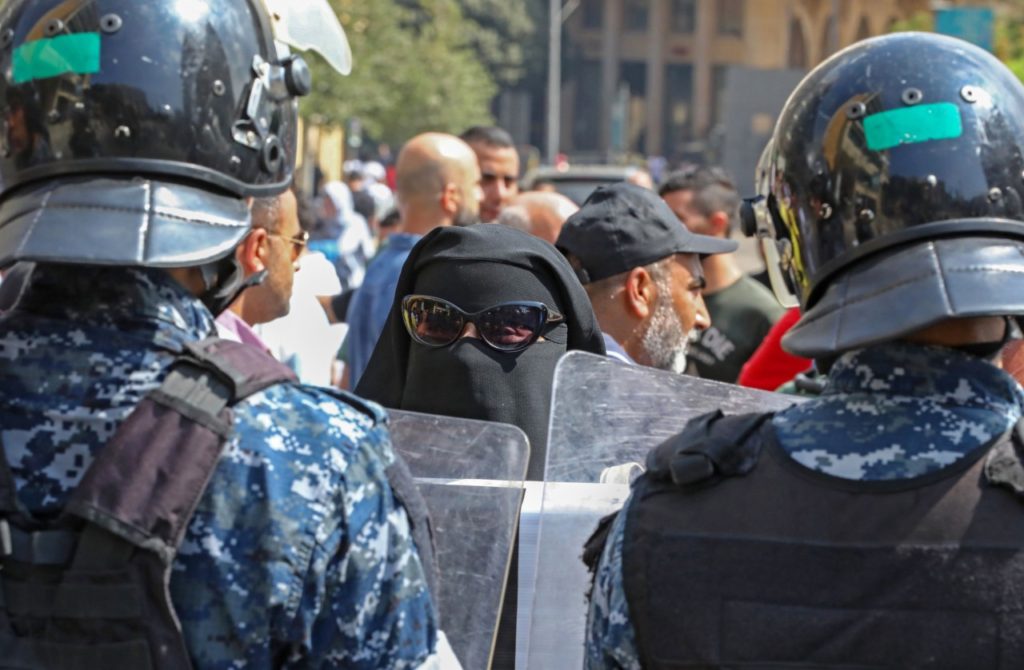 Later in the day, dozens of protesters closed major roads in the capital with burning tires and barriers causing traffic jams. Some of them began dispersing in the afternoon although others remained closing major intersections amid wide army and police deployment.

Despite tens of billions of dollars spent since the 15-year civil war ended in 1990, Lebanon still has crumbling infrastructure including daily hourslong electricity cuts, trash piles in the streets and often sporadic, limited water supplies from the state-owned water company.

Last week, the local currency reached 1,650 Lebanese pounds to the dollar at exchange shops after it had been stable at 1,500 since 1997. Although the official price is still pegged at 1,500 pounds to the dollar, people find it difficult to get hard currency at this rate from local banks.

The protest was called for by activists from the civil society as well as individuals.

Last week, amid fears that there will be an open-ended strike at gas stations, people waited in long lines to get vehicles filled.

Because of the shortage in hard currency, there have been complaints by importers of fuel, medicine and wheat, that they buy the products from abroad paying in U.S. dollars and when they sell in Lebanon they do so in the local currency.

Lebanon’s central bank is scheduled to issue instructions to regulate ways to fund imports of fuel, medicine and wheat on Tuesday.

The state-run National News Agency reported that angry protesters briefly closed the road in the eastern town of Masnaa that leads to the Syrian capital of Damascus. The agency also reported road closures in the northeastern regions of Baalbek and Hermel. There were also protests in the northern city of Tripoli and the southern city of Sidon.