Beirut (AFP) — Men, women and children gathered in the Lebanese capital Beirut Sunday to protest corruption and tax hikes for a fourth day, after the resignation of a key Christian party rocked the country’s fragile coalition government.

Demonstrations had flared on Thursday in response to a proposed $0.20-tax on calls via WhatsApp and other messaging services.

While the government quickly dropped the plans, the protests morphed into demands for a sweeping overhaul of Lebanon’s political system, with grievances ranging from austerity measures to poor infrastructure.

Thousands rallied across the country on Saturday, chanting “revolution” or “the people demand the fall of the regime” — a common refrain of demonstrations in other parts of the Arab world.

The protests have been largely good-natured, with people singing or launching into traditional dabke dances on Saturday, while others played cards and smoked shisha into the early hours.

In Tripoli, Lebanon’s traditionally conservative second city, the protests at points looked like a music festival, with a DJ pumping out dance music from loudspeakers.

On Sunday morning, volunteers were cleaning the streets near the parliament in Beirut while rubbish collectors righted upturned dumpsters. 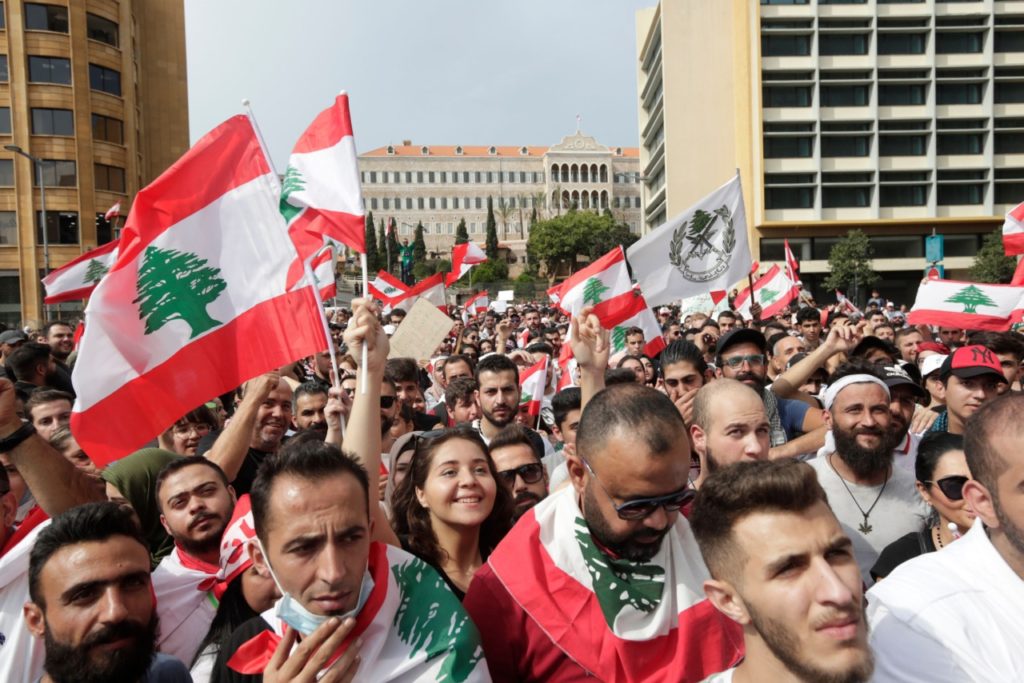 Lebanese protesters rally in downtown Beirut on the third day of demonstrations against tax increases and official corruption, on October 20, 2019. Many waved billowing Lebanese flags and insisted the protests should remain peaceful and non-sectarian. The demonstrators are demanding a sweeping overhaul of Lebanon’s political system, citing grievances ranging from austerity measures to poor infrastructure. (ANWAR AMRO/AFP via Getty Images)

The protests have also been marked by their diversity, drawing wide swathes of Lebanese society largely united on what they oppose — with many condemning the entire political class as thieves and criminals — but so far lack a clear set of demands.

Lebanon’s political system was set up to balance power between the country’s religious sects, including Christians, Sunni Muslims, Shiite Muslims and Druze.

Many current senior politicians came to prominence during the country’s 15-year civil war that ended in 1990.

Beleaguered Sunni Prime Minister Saad Hariri had given his coalition partners until Monday evening to back key reforms.

But late Saturday, Samir Geagea, head of the Christian Lebanese Forces party, announced his ministers were quitting the government.

“We are now convinced that the government is unable to take the necessary steps to save the situation,” said Geagea.

Other members of the government, including Shiite movement Hezbollah, are opposed to resigning.

Demonstrators in Beirut celebrated the news of the LF’s resignation but continued to call for wholesale change. In Tripoli, they set off fireworks.

“It’s better to go to another election as people already woke up.”

Promised austerity measures are essential if Lebanon is to unlock over $11 billion in economic assistance pledged by international donors last year.

Lebanon’s public debt stands at around $86 billion — more than 150 percent of gross domestic product — according to the finance ministry.

Growth has plummeted in recent years, with political deadlock compounded by the impact of eight years of war in neighbouring Syria.