TEL AVIV – The senior advisor of Prime Minister Benjamin Netanyahu’s chief political rival, Benny Gantz, called President Donald Trump a “psychopath” and compared him to Hitler in a shocking series of past tweets unearthed ahead of a meeting between the Blue and White leader and Trump on Monday.

Ronen Tzur accompanied Gantz to Washington to meet with Trump on Monday in what is expected to be a confab about the imminent unveiling of the American president’s much-anticipated “deal of the century” for solving the Israeli-Palestinian conflict.

However, if his past tweets are anything to go by, Tzur was far from enthralled at the prospects of meeting Trump.

In an August 2017 tweet, Tzur wrote, “Barack Hussein Obama is out, Donald Adolf Trump is in. Dying to know who’s next.”

In another tweet posted shortly after Trump took office, Tzur wrote, “Trump’s election proves that the world has not suffered through a painful enough war for years.”

A Tzur tweet from May 2018 states, “2 approaches to leadership now clashing fiercely: Obama and Clinton’s psychological approach and Trump and Putin’s psychopathic approach.” 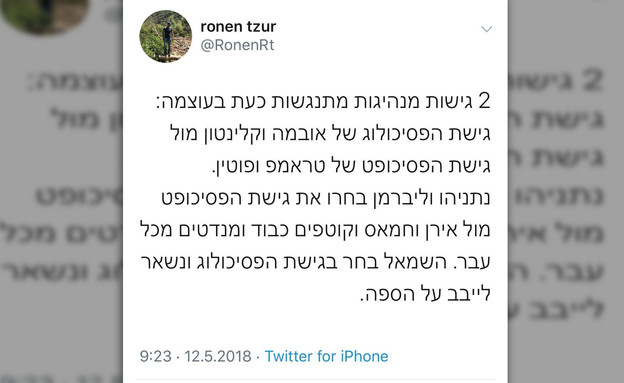 In another tweet from May 2017, Tzur wrote, “The most surprising thing about Trump is only one thing was leaked to the Russians until now.”

In yet another tirade two months later, Tzur wrote: “Tonight at the White House: The Elimination Episode.” The Hebrew word for elimination is the same as impeachment.

Incredibly, Tzur didn’t see it fit to delete the tweets before accompanying Gantz to meet the president.

He released a statement two hours prior to the meeting with Trump apparently referring to Likud members and supporters as a cult.

“Seeing that some members of the cult have gotten overexcited at some tweets from past years I will clarify: There were certain issues that I thought differently about from the president (not that it matters to anyone).

“In the meantime it seems that [Trump] is the most courageous of all American presidents, and the most significant with regard to Israel’s security needs in recent generations and together with millions of Israelis I salute him.”

A source from Likud did not mince words and said that the fiasco only highlighted how unfit Gantz was for the job of prime minister.

“Benny Gantz displayed massive political ignorance and irresponsibility when he brought with him to the White House his aide Ronen Tzur who called the U.S. president ‘Donald Adolf Trump’ and posted a long list of tweets against him on social media networks,” the Likud source said.

“Let’s hope that Gantz’s irresponsible behavior does not hurt Israel’s national interests when facing the U.S. government,” the source added.

This is not the first controversy involving the Blue and White party’s anti-Trump sentiment.

Breitbart Jerusalem reported last week that members of Blue and White signed a letter in 2015 aimed at pressing Netanyahu to cancel a meeting with then-presidential hopeful Trump. The letter in question demanded the Israeli prime minister cancel a December 2015 meeting with Trump over the latter’s “disgraceful racism” with his so-called “Muslim travel ban” campaign promise.