Eighteen leading American Jewish organizations including AIPAC called on the U.S. to pressure Jordan’s King Abdullah into extraditing a woman who was behind a 2001 terrorist attack in Jerusalem that killed 15 people, including two American citizens.

The organizations expressed their “collective outrage” over Jordan’s refusal to extradite Ahlam Tamimi over her role in the  August 9, 2001 bombing of the Sbarro Pizzeria, which also saw 130 people wounded.

They called on the U.S. to hold “Jordan accountable to its commitments under its extradition treaty with the United States and bring all pressure to bear, including but not limited to recent government legislation significantly impacting US financial aid to Jordan.”

Arnold Roth’s daughter Malki, who was 15 at the time, was one of two Americans killed in the attack.

Roth spearheaded a campaign to extradite Ahlam Aref Ahmad Al-Tamimi who was convicted of planning the attack. However, Tamimi, along with 1,000 other Palestinian terrorists, was released in a 2011 prisoner exchange deal for the IDF soldier held captive by Hamas, Gilad Shalit.

The Trump administration, which has supported Roth’s case, said last month that it was weighing “all options” to exert pressure on Jordan to extradite Tamimi, including leveraging billions of dollars in foreign aid. Tamimi was charged in 2013 for conspiring to use a weapon of mass destruction against U.S. nationals.

Roth said the Jewish group’s declaration constituted “a breakthrough in our efforts to see the mastermind of the August 9, 2001 Sbarro pizzeria massacre, the savage killer of our beloved daughter Malki, brought to justice.”

He also said his family was “hugely grateful” to all the individuals and organizations that have fought on their behalf. 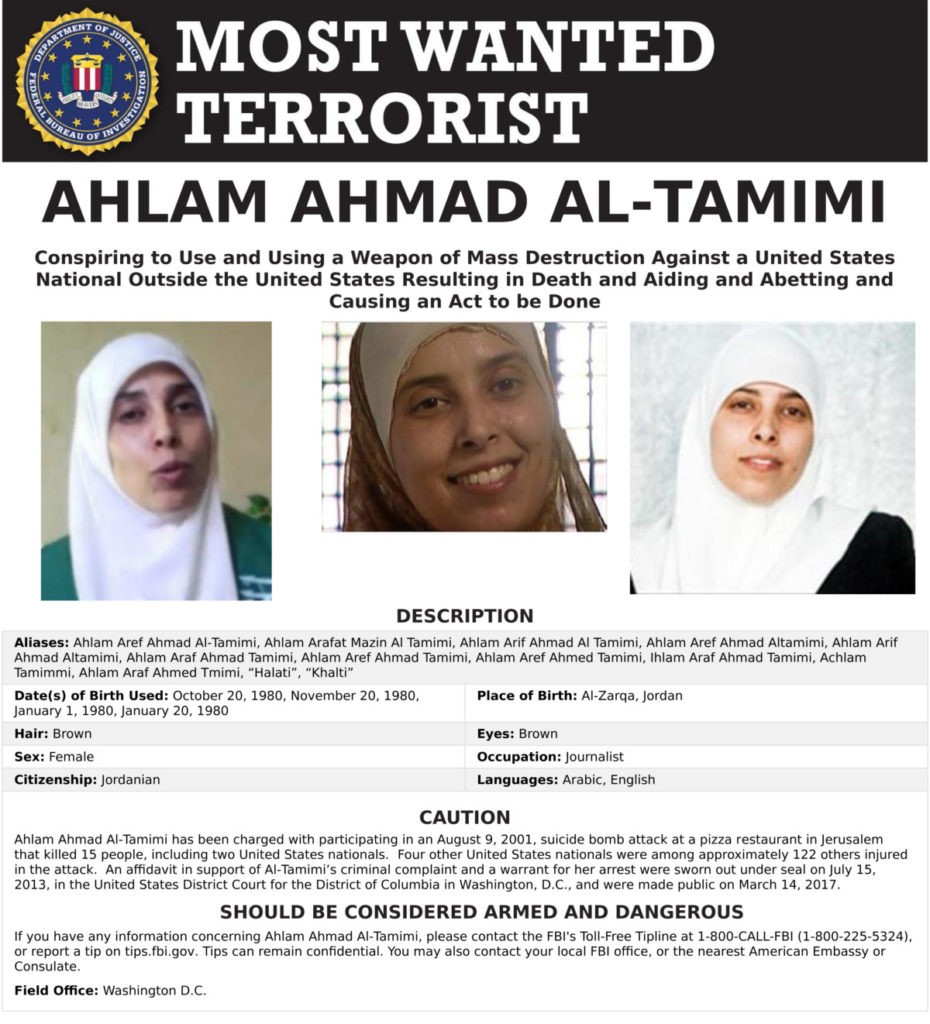 This image provided by the FBI is the most wanted poster for Ahlam Aref Ahmad Al-Tamimi, a Jordanian woman charged in connection with a 2001 bombing of a Jerusalem pizza restaurant that killed 15 people and injured dozens of others. The case against Ahlam Aref Ahmad Al-Tamimi was filed under seal in 2013 but announced publicly by the Justice Department on March 14, 2017. The FBI has added Al-Tamimi, who served eight years in prison after pleading guilty in an Israeli court, to its list of Most Wanted Terrorists. (FBI via AP)

“We have been working hard to move public opinion in the US to stand with us,” said Roth on Tuesday. “It’s ongoing. The organizations whose support we’re announcing today speak publicly and with one voice in this extraordinary call for justice for Malki and the other Sbarro victims. It’s time that Jordan’s disregard for its legal, diplomatic and moral obligations to hand Tamimi over to US justice was brought to an end.”

“The unrepentant Jordanian woman and Hamas agent who was convicted in Israel for her role in choosing the central Jerusalem pizzeria as the target for the massive bombing attack,” has been charged in the United States “under a Federal law aimed at terrorists who kill Americans outside U.S. territory,” Roth noted.

In their announcement, the Jewish groups noted that Tamimi “was a 21-year-old newsreader at a Palestinian Arab television station in the summer of 2001” when she orchestrated the bombing. “She would later claim credit for the attack, admitting to scouting the location of Sbarro… and bringing the bomb to its door.

“She has boasted for the record that two of the factors leading her to pick the pizzeria as a bombing target were the crowds that gathered there during lunch hour and that she ‘knew there was a Jewish religious school nearby…’ If there was any cloud in her bright skies, it was – in her words – that ‘I admit that I was a bit disappointed because I had hoped for a larger toll’.”

After her release in 2011, Tamimi returned to her birthplace, Jordan, and launched a career as a satellite TV host. She received a hero’s welcome attended by hundreds, including Muslim Brotherhood representatives. On her TV show, Tamimi frequently boasts about her involvement in the attack, which included selecting the location for the maximum number of casualties as well as accompanying the suicide bomber to the restaurant.

“Being in Jordan has given me strength, because Jordan does not have an extradition agreement [sic] with the United States,” Tamimi told Al Jazeera in an interview last year. “This led to the issuing of a legal decision refusing my extradition, and Jordan’s position on that matter is very clear.”

“Why am I, Ahlam, considered to be a terrorist, when I am part of a movement for freedom and national liberation?” she asked.

In a separate interview with AP, Tamimi said that all attempts by Palestinians to resist Israel, including killing children and innocents, were justified.

The U.S. issued a warrant for her arrest and a subsequent extradition order from Jordan, with whom it signed an extradition treaty in 1995. However in the 2017 ruling, Jordan’s top court said the treaty was never ratified by the Jordanian parliament.