President Reuven Rivlin warned on Wednesday the murder of Prime Minister Benjamin Netanyahu or the murder of a protester was a real possibility amid the current tumultuous state of affairs in Israel, in which almost daily protests are occurring against the premier.

Tuesday night’s protests in Tel Aviv turned violent when a group of anti-Netanyahu protesters were beaten with clubs.

“I would like to say clearly, given the violent developments in the last day: The murder of a demonstrator protesting in the State of Israel and the murder of an Israeli prime minister aren’t an imaginary scenario,” Rivlin said.

“Alas for our democracy if a man’s hand is raised against his brother,” he said.

Rivlin added all violence should be denounced, regardless of which end of the political spectrum it emerged from.

“I decry the violence directed towards demonstrators and call on the Israel Police to pursue its perpetrators to the fullest extent of the law,” he said.

He further lamented the threats to Netanyahu.

“I decry the calls to harm the prime minister and his family and call on the Israel Police to address every threat of this kind with the utmost seriousness. We cannot discount any threat. Our existence depends on it. Now – immediately – the opposition and the coalition should speak up and take actions to calm things down and stop the violence.”

Earlier Wednesday, Netanyahu condemned the violence against protesters and said he expected a full investigation by police to bring the perpetrators to justice.

He added: “By the same token there’s no room for incitement or threats of murder — explicitly or implicitly — against me and members of my family, including the embarrassing threat of a crucifixion today in Tel Aviv.”

Netanyahu was referring to an exhibit installed in Tel Aviv’s Rabin Square of Jesus’ Last Supper that featured him instead of Jesus – an apparent threat to crucify him.

The prime minister also blasted the media and political rivals — especially opposition leader Yair Lapid — for ignoring violence toward police as well as threats on his own life, pointing to the attack of a policeman outside his residence in Jerusalem as well as the arrest of a protester carrying two knives.

“I expect everyone to have one position: to denounce all violence and all incitement,” he added.

In response, Lapid said, “Netanyahu, we’re no longer scared of you. Yes, I do encourage protestors. Yes, Yesh Atid people are part of the protests. Yes, we we will continue to fight hatred and the venom you propagate around you until we eject you from” your position. 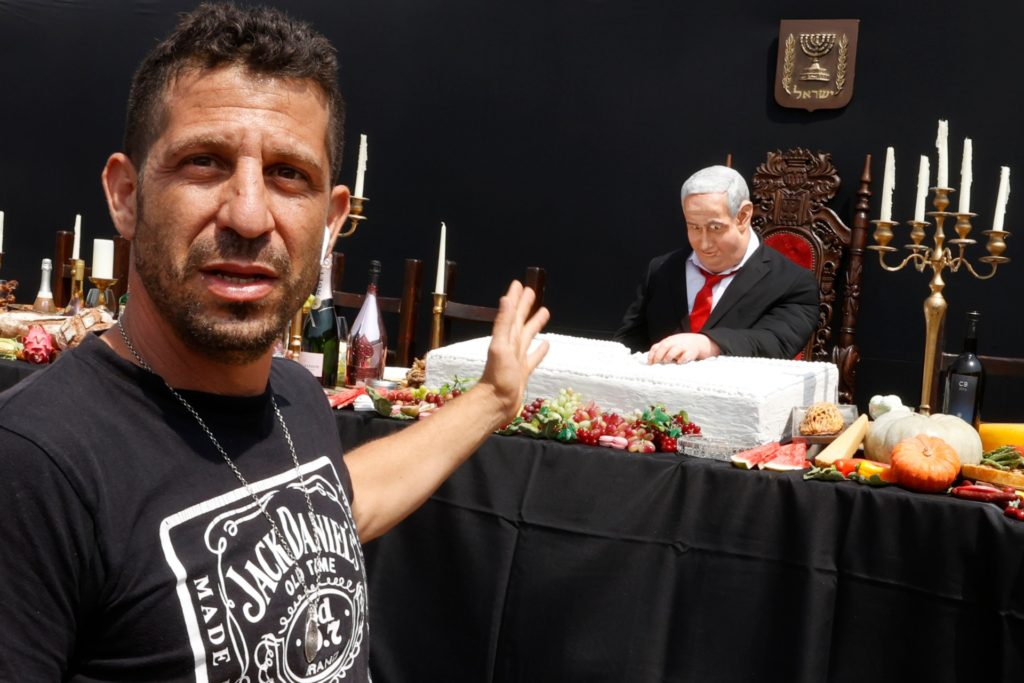 Israeli artist Itay Zalait talks to journalists in front of his protest art installation depicting Israeli Prime Minister Benjamin Netanyahu sitting on a table for the “Last Supper” on July 29, 2020 at Rabin Square in Tel Aviv as protests demanding Netanyahu’s resignation are growing by the week. (JACK GUEZ/AFP via Getty Images)