Prime Minister Benjamin Netanyahu on Tuesday claimed ongoing demonstrations outside his residence in Jerusalem are “strange manifestations” of incitement against him, including calls for his family’s murder, all funded by left-wing organizations.

His comments, made while he toured the Home Front Command headquarters in Ramle, came after his son, Yair Netanyahu, referred to the anti-government protesters as “aliens” a day earlier.

The younger Netanyahu in a radio interview said his father was “entertained” and even emboldened by clips he shows him of the demonstrations outside the prime minister’s residence on Jerusalem’s Balfour Street.

“I try not to show him obscene things from the protests, because in the end it is unpleasant, but you know, it entertains him, the truth is that it even gives him some strength,” Yair Netanyahu said.

Earlier in the month, a female demonstrator sparked outcry for stripping down and exposing her breasts atop a menorah, the ostensible symbol of the Israeli state, while waving a red antifa flag.

Netanyahu’s son said his father would not follow in the footsteps of late Likud leader Menachem Begin, who resigned from office due to massive public pressure in the form of mass protests over his government’s handling of the 1982 Lebanon War.

“My father’s a strong man. It makes him laugh,” Netanyahu said.

On Tuesday, the elder Netanyahu said that “governments are replaced only in the ballot box,” not demonstrations.

“They are political left-wing protests fueled by left-wing organizations and unfortunately encouraged by the media,” the prime minister said. “There are strange phenomena with non-stop incitement against me, my wife and my family. There are even direct calls for murder that are barely reported.”

Speaking to Galey Israel radio, Yair Netanyahu said: “He sees what we all see — these aliens at the protests. It makes him laugh, like entertainment.”

He later clarified on Twitter: “When I spoke about ‘aliens,’ at the left-wing protests in Jerusalem, I meant those who are dressed up as aliens and UFOs, those who strip, those who dress up as genitals, those who brandish crude signs, those who put a spaghetti pot on their heads and those dressed up as Spider-Man. There are too many of these, and it’s funny.

“The rest is really not funny — the incitement and the explicit calls for murder that are intensifying each day and breaking records in terms of the ceaseless encouragement of the media.”

Likud coalition chairman Miki Zohar, who was later asked in a TV interview if he shared Yair Netanyahu’s “aliens” view, said:  “I’ll say one thing about those demonstrators. They’re not gathering… to shout about their difficulties and their problems. They are anarchists, most of them funded [to demonstrate]…. They are prepared to infect the entire state of Israel with coronavirus for the sake of their exhibition of hatred. They are very dangerous people. And some of them speak very violently, very dangerously.” 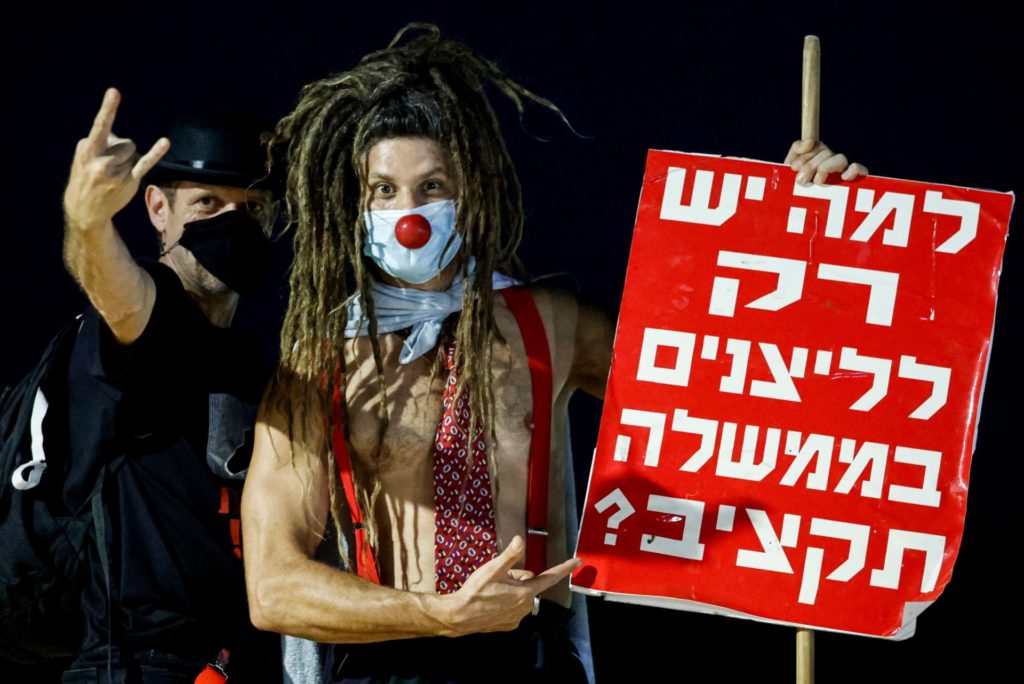 A protester, mask-clad due to the COVID-19 coronavirus pandemic and wearing a clown’s red nose, stands holding a sign reading in Hebrew “why only clowns in government have a budget?” during a demonstration against the Israeli government in the Mediterranean coastal city of Tel Aviv on August 1, 2020. Crowds of thousands have gathered in Tel Aviv and outside the prime minister’s Jerusalem residence in recent weeks, with some demonstrators demanding Prime Minister Benjamin Netanyahu’s resignation. (JACK GUEZ/AFP via Getty Images)

Responding to the prime minister’s comments on Tuesday, the Black Flag movement, one of the protest’s main organizers, said that “the worst prime minister in the history of the State of Israel is continuing his panic attacks, but we will continue to see him outside on Balfour Street.”

Opposition leader Yair Lapid responded that “what is truly a strange manifestation is a government with 36 ministers (there are 34) at a time of an economic crisis with 21% unemployment and a million shekels in tax benefits for a prime minister when people don’t have what to eat.” He added that a prime minister with three criminal indictments was also a “strange manifestation.”

Netanyahu has described the protests as a “corona incubator” and has accused them of being funded by his enemies, including former prime minister Ehud Barak.