Lebanese protesters have hung in effigy an image of Hezbollah terror chief Hassan Nasrallah during protests outside the country’s parliament in Beirut, amid mounting anger over the government’s silence after last Tuesday’s explosion killed more than 160 people, injured 6,000 more and destroyed large swaths of the city.

Hezbollah, which holds the majority of seats in the Lebanese coalition, has denied rumors the ammonium nitrate stockpile that exploded at the Beirut port belonged to the terror group.

“We own nothing at the port. Not an arms depot, not a missile depot nor missiles nor rifles nor bombs nor bullets nor ammonium nitrate,” Nasrallah said in a televised speech on Friday. “Our people are among those injured and killed in the blast.”

Thousands of protesters gathered on Saturday afternoon, shouting slogans including, ““Hezbollah is a terror organization.”

Alongside cutouts of Nasrallah, protesters also hanged effigies of Lebanese President Michel Aoun and Nabih Berri, a senior Lebanese official. Mock gallows were also erected in the square outside the parliament. The hashtag #HangThem trended on social media.

Protesters hurled stones at security forces and were met with heavy streams of tear gas in return. At least 142 people were wounded, the Red Cross said.

Tuesday’s explosion, which is estimated to have caused up to $15 billion in damage, comes at a time of acute financial crisis for the country.

Nasrallah has in the past threatened to annihilate Israel with what he described as a “nuclear” explosion at the Haifa port using the same chemicals found at the Beirut blast. 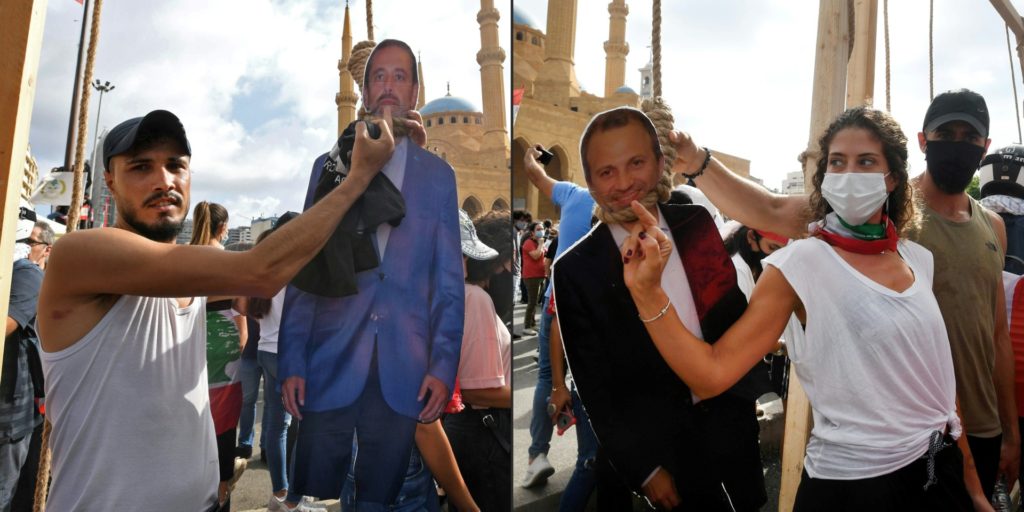 This combination of pictures shows (L to R) a man giving the finger to a cardboard cut-out of former Prime Minister Saad Hariri and a woman doing the same to a cut-out of former Foreign Minister Gibran Bassil during a demonstration against a political leadership they blame for a monster explosion that killed more than 150 people and disfigured the capital Beirut. (AFP via Getty Images)

In a February 2016 filmed speech, Nasrallah boasted that with several missiles his terror group could set off the ammonia stockpiled at Haifa port to set off an explosion that would be tantamount to a nuclear bomb and would kill tens of thousands of Israelis and ruin the lives of hundreds of thousands more.

“In other words Lebanon has a nuclear bomb. This is not an exaggeration,” Nasrallah said, laughing. 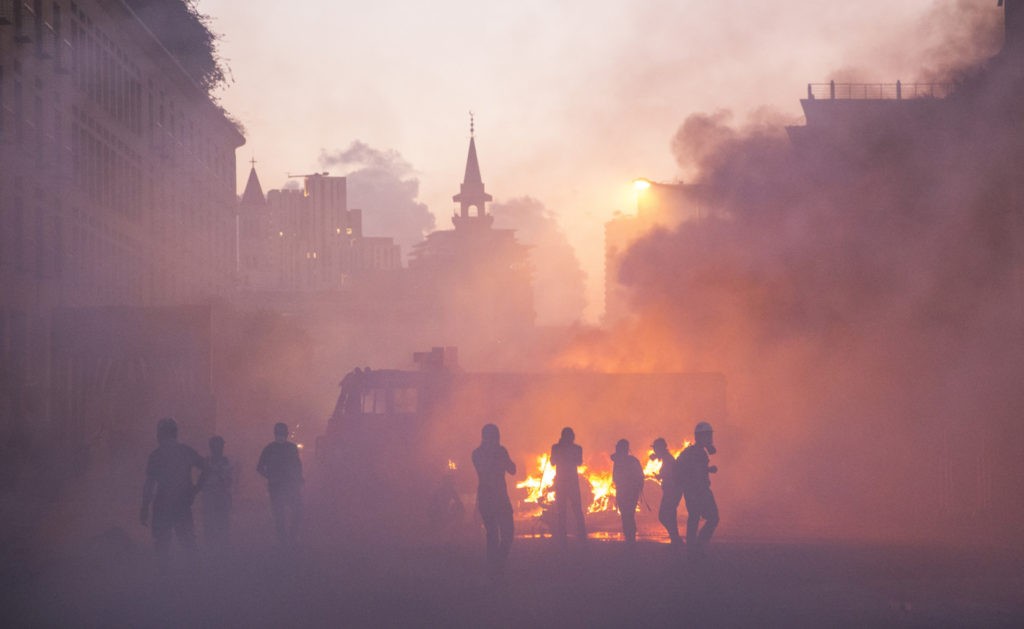 Protesters move through a cloud of tear gas during a protest at Martyrs Square on August 8, 2020 in Beirut, Lebanon. The Lebanese capital is reeling from this week’s massive explosion that killed at least 150 people, wounded thousands, and destroyed wide swaths of the city. Residents are demanding accountability for the blast, whose suspected cause was 2,700 tons of ammonium nitrate stored for years at the city’s port. (Daniel Carde/Getty Images)