Turkish President Recep Tayyip Erdogan warned the Armenian people on Thursday that the “struggle” against them will “continue from now on many other fronts” in remarks at a victory parade in Azerbaijan.

The Azeri government organized the event to celebrate the removal of a separatist ethnic Armenian government in Nagorno-Karabakh, a historically Armenian territory Azerbaijan has claimed since Joseph Stalin placed it under the control of the Azeri Soviet Socialist Republic before the collapse of the Soviet Union. The Turkish government offered Azerbaijan military aid – including, according to many reports, shipping mercenaries to the region from Syria – that ultimately resulted in the defeat not just of the separatists in Nagorno-Karabakh, but of the Armenian government.

The Turkish parliament recently granted Erdogan permission to deploy “peacekeeping” troops in the region if Azerbaijan deemed them necessary. Russian troops, traditionally allied with the government of Armenia, are in the region to protect the ethnic Armenian population as part of the agreement to end hostilities.

The peace deal Armenia signed with Azerbaijan also placed some Armenian territories in Azeri control outside of Nagorno-Karabakh, prompting waves of thousands of protesters in the Armenian capital, Yerevan.

Speaking at the parade in Baku on Thursday, Erdogan affirmed that the win in Nagorno-Karabakh was a “glorious victory” but “Azerbaijan’s saving its lands from occupation does not mean that the struggle is over.”

“The struggle carried out in the political and military areas will continue from now on many other fronts,” Erdogan vowed, without elaborating on what he considered to be the struggle in question or how it would continue.

Erdogan watched the parade – featuring nearly 6,000 Azeri and Turkish soldiers, alongside Azeri President Ilham Aliyev, who thanked Turkey profusely for its support. Ethnic Azeris are a Turkic people that the Turkish government considers kin, which Erdogan asserted in his remarks by stating, “we have taken the two states, one nation motto of the great leader Aliyev [father of Ilham Aliyev] as a guide in our relations with Azerbaijan.”

While Turks and Azeris are majority-Muslim, most Armenians are Christians. In addition to being allied with the Azeris, the government of Turkey has a long history of hostility against Armenians. The Turkish government orchestrated what is considered the first modern genocide against the Armenian people in 1915, killing an estimated 1.5 million of the estimated 2 million Armenians in the world.

Given the history of genocide that Turkey has with the Armenian people – a genocide that Erdogan, like all Turkish leaders in history, denies – the president’s comments about continuing the “struggle” raised alarm in Armenian circles. A spokesman for the Armenian prime minister, Mane Gevorgyan, responded to both Erdogan and Aliyev on Thursday by accusing them of “glorifying” the Armenian genocide of 1915. 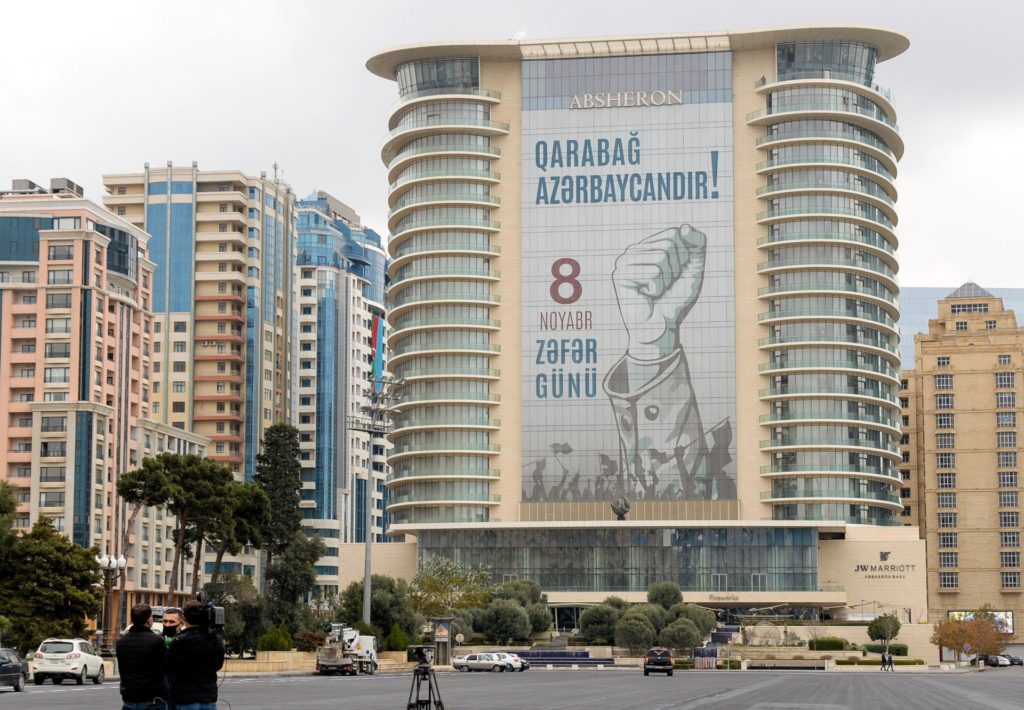 A TV crew works on Baku’s Azadliq square in front of a huge poster reading “Karabakh is Azerbaijan!” decorating the facade of a hotel on December 7, 2020, days before December 10 military parade celebrating the country’s victory in its armed conflict with Armenia over the disputed Nagorno-Karabakh region. (STRINGER/AFP via Getty Images)

“Speaking with the Armenian people with threats is condemnable and cannot bring lasting stability in the South Caucasus,” Gevorgyan said in a statement. “It’s also strongly condemnable the glorification of the ideologies of the Young Turks, the architectures of the Armenian Genocide, by the Turkish president. Such acts put Turkey’s declarations, including about their readiness to contribute to the establishment of regional peace and stability, under question.”

The circumstances surrounding the return of hostilities to Nagorno-Karabakh this year remain unclear; both sides claim the other attacked fired. The Armenians who had self-administered the region for decades, who call the region the sovereign Republic of Artsakh, found themselves struggling against the Azeri military, which reportedly bombed civilian areas heavily. Artak Beglaryan, the official human rights ombudsman for the government of Artsakh, accused Azeri soldiers in October of deliberately bombing a maternity hospital in a video standing before the rubble of the facility. The incident, one of many similar accusations from Artsakh officials and human rights advocates, occurred in Stepanakert, Nagorno-Karabakh’s largest city.

Videos surfacing on social media subsequently appeared to show various human rights violations apparently intended as offense to the Armenian people. In October, video surfaced appearing to show Azeri soldiers beheading an Armenian soldier. Prior to the release of the video, the Human Rights Defender’s office of the government of Armenia said that the brother of the beheaded soldier received a phone call from the soldier’s phone.

“There were two phone calls with Azerbaijani soldiers who used hate speech with intention to humiliate the Armenian killed soldier’s brother. As the latter informed the Human Rights Defender, the calls were made from the Armenian soldier’s phone number,” the office asserted.

This week, another video appeared to surface of Azeri soldiers beheading an elderly Armenian man, allegedly taken in the disputed region. Beheadings became a staple of the bloody Nagorno-Karabakh war following the collapse of the Soviet Union and repeatedly occurred during skirmishes erupting in 2016.

Another video circulating in November appeared to show Azeri soldiers desecrating tombs with Armenian-language names written on them following the defeat of the locals in the area.

The government of Artsakh claimed following the peace deal that about half the population of Nagorno-Karabakh, most of them Armenians, fled the region into Armenia, creating a migrant crisis for the small country. In leaving, many Armenians burned down their own homes and neighborhoods to deny the Azeris their use.