Adelson, a philanthropist known for his donation to conservative and pro-Israel causes as well as his support of President Donald Trump and Netanyahu, passed away Monday night at the age of 87 at his home in Malibu, California.

“Sara and I are heartbroken by the passing of Sheldon Adelson,” Netanyahu said, referencing his wife Sara Netanyahu.

“He was a wonderful friend to us personally and an incredible champion of the Jewish people, the Jewish state and the alliance between Israel and America,” he added.

He went on to call Sheldon one of the world’s “greatest entrepreneurs and philanthropists” as well as a “great Jewish patriot.”

“We will never forget him. May his memory be blessed,” Netanyahu said. 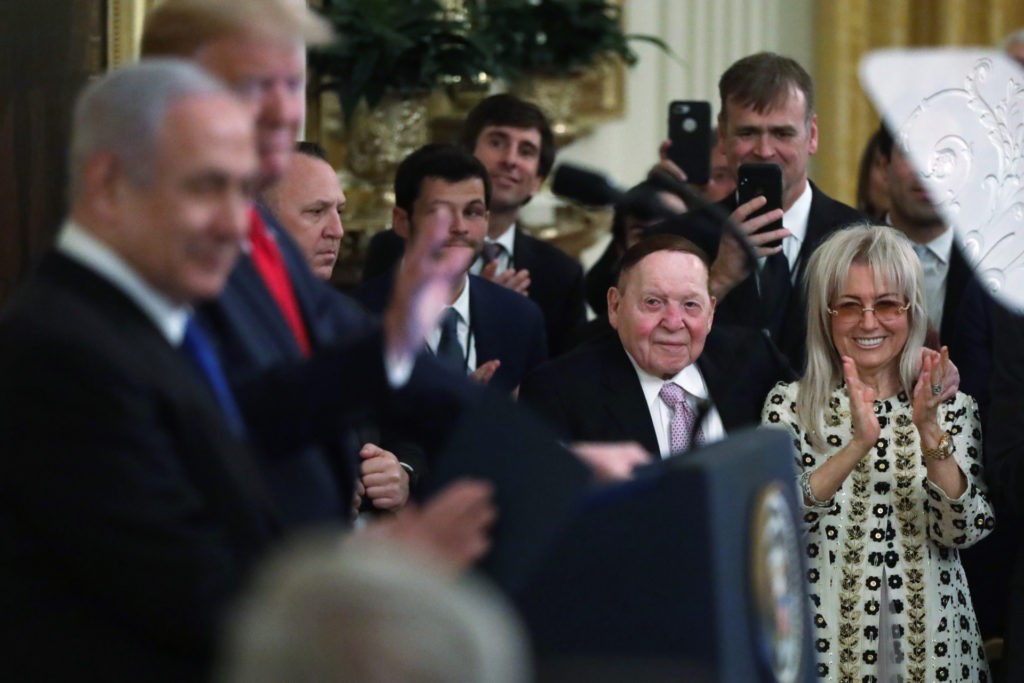 He rose from humble beginnings in Boston in a Jewish Democrat family to becoming one of the Republican Party’s most influential donors, earning the moniker “megadonor” for giving the single largest individual donations in recent election cycles.

He played a key role in generating seismic changes in the Middle East by pushing the Trump administration’s policies in the region, including the transfer of the U.S. embassy to Jerusalem and the normalization deals between Israel and four Arab states. He is also credited as being behind Trump’s decision to withdraw from the nuclear deal with Iran.

He funded a free Israeli daily, Israel Hayom, that took an editorial line supporting Netanyahu and his policies. The paper ran an obituary by his wife, Miriam, remembering Adelson as a “visionary and philanthropist.”

In a 2016 Washington Post column, he defended his right to endorse Trump. He said:

Despite being the grandson of a Welsh coal miner and the son of a Boston cab driver, I’ve had the remarkable experience of being part of almost 50 different businesses in my more than 70-year business career.

So, tell me I’m not a conservative-enough Republican or I’m too hawkish on Israel or whatever else you may think, but I think I’ve earned the right to talk about success and leadership.

In a statement, Secretary of State Mike Pompeo said the “world, Israel and the United States are safer because of his work.”

Sheldon Adelson’s life represents the best of the American dream. Susan and I send our deepest condolences and prayers to his family as the world mourns his passing. pic.twitter.com/QkL60v7iOE

Former president George W. Bush, hailed Adelson as an “American patriot, a generous benefactor of charitable causes, and a strong supporter of Israel.”

“Sheldon battled his way out of a tough Boston neighborhood to build a successful enterprise that loyally employed tens of thousands — and entertained millions,” Bush said.

Netanyahu rival and the leader of the newly formed New Hope party, Gideon Sa’ar, lauded Adelson for his support of Israel and Jews around the world. He said:

Sheldon Adelson was one of the greatest supporters of Jewish organizations in Israel and around the world. Over the past decades, he contributed to many causes, including strengthening Jewish education, commemorating the Holocaust, building bridges between Diaspora Jewry and the State of Israel, and strengthening Israel.

“In addition to his philanthropic activities, Adelson devoted his time and energy to speaking up for Israel, making Israel’s case to US decision-makers, and strengthening ties between Israel and the United States,” he concluded.