The head of Iran’s Islamic Revolutionary Guard Corps’ drone command was behind the attack on the Israel-operated oil tanker off the coast of Oman, senior Israeli ministers told diplomats from U.N. Security Council member states on Wednesday.

“[Saeed] Ara Jani is the head operator of the IRGC Air Force’s UAV system, which struck the Mercer Street,” Defense Minister Benny Gantz said according to the Jerusalem Post. “He provides the supplies, training, plans and is responsible for many acts of terror in the region.”

He went on to note Iran was behind dozens of recent terrorist attacks in the region, and operates terror proxies in Yemen, Iraq, Lebanon and elsewhere.

“What is the international community going to do about it? Does international law still exist? Does the world have the ability and the will to enforce it?” he asked. “If the answer is yes, the world needs to act now.”

Lapid argued if the world does not respond to the latest incidents, then there is no international community, and it will be “every man for himself.”

Israel’s Ambassador to the U.N. and U.S., Gilad Erdan wrote a letter to the UNSC, stating: “Iran’s repeated brazen and murderous actions – which constitute grave violations of the United Nations Charter and of international law more generally – serve not only to threaten the safety of international shipping and navigation and disrupt international trade, but to further destabilize a highly volatile region.

“The Security Council should not sit idly by in the face of such violations by Iran or by the terrorist organizations throughout the region that serve as its proxies,” he added.

The Iranian IRGC has played a major role “in sowing violence and destruction in the Middle East and elsewhere in the world,” he further outlined, and added the Guard Corps “is the main sponsor of terrorist groups and militias throughout the region.”

“Over time, the IRGC has developed dangerous and precise weaponry, such as attack drones and long-range missiles, which it uses against civilians and civilian objects in countries across the region, whether directly or by means of the terrorist groups the IRGC sponsors and supports,” Erdan wrote. 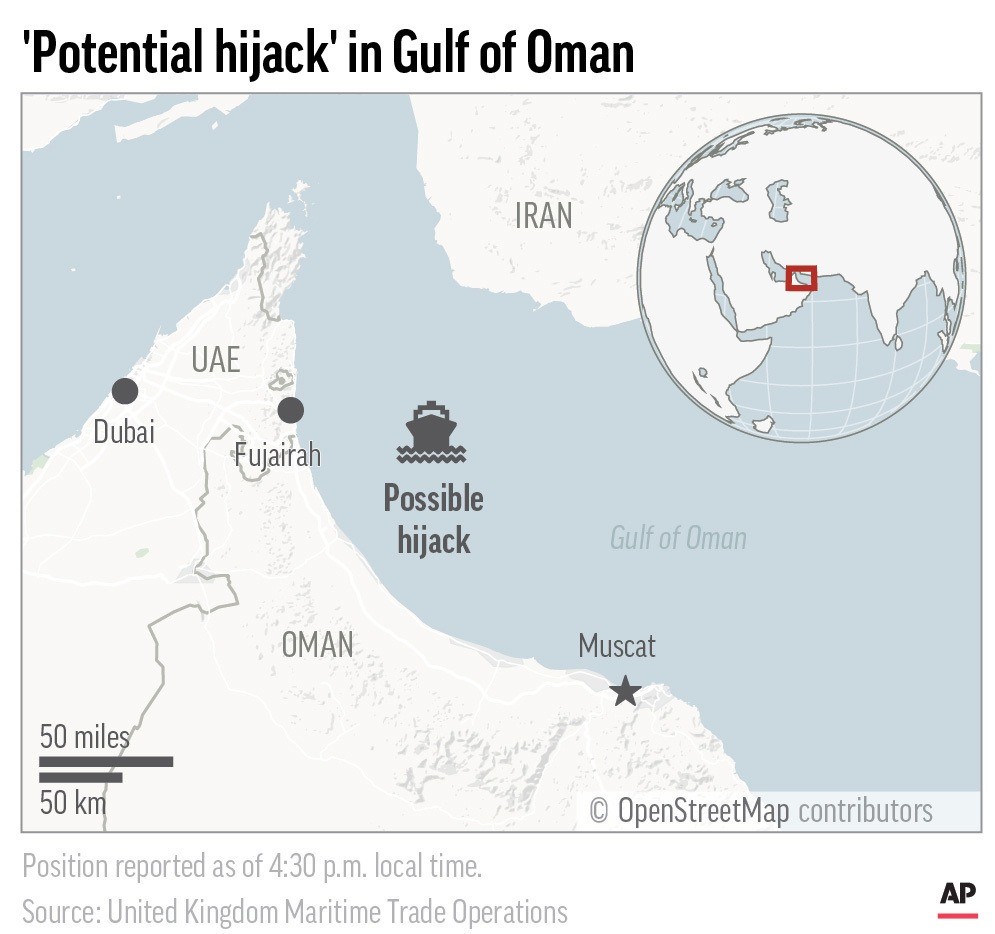 A ship in the Gulf of Oman may have been a hijacking target Tuesday. (AP Graphic)

Erdan also pointed to several maritime attacks by Iran in the past year alone, including on the Israeli-owned vessels the Helios Ray in February and the Hyperion Ray in April. The CSAV Tyndall, previously owned by an Israeli, was attacked last June.

Iran struck an oil tanker with connections to Israel near Oman on Friday, killing two crew members on board. It was the first deadly attack in the continuing maritime war-between-wars and has led Jerusalem to accuse Tehran of “sowing violence and destruction.”

The Japanese-owned Mercer Street is operated by London-based Zodiac Maritime, which belongs to Israeli billionaire Eyal Ofer. Despite the tenuous ties to Israel, it was enough for Iran to attack it. Two crewmen, a British and a Romanian national, were killed.

Israel Prime Minister Naftali Bennett said Tuesday while he was rallying other countries to respond collectively to an Iranian attack on an Israeli-operated oil tanker off the coast, his country could act alone if needed.

Tehran denied involvement in the attack but the UK, U.S. and Romania have all confirmed to have seen irrefutable proof provided by Israel of its culpability.

Secretary of State Antony Blinken pledged a “collective response” to the drone attack.