Massive wildfires outside Jerusalem prompted the evacuation of several communities in the area, and caused the government to call for international aid.

Firefighters attempted to contain the blaze near a forest area along the main highway that connects Jerusalem and Tel Aviv, but said that strong winds were causing it to spiral out of control.

An enormous pillar of smoke blocked out the sun. 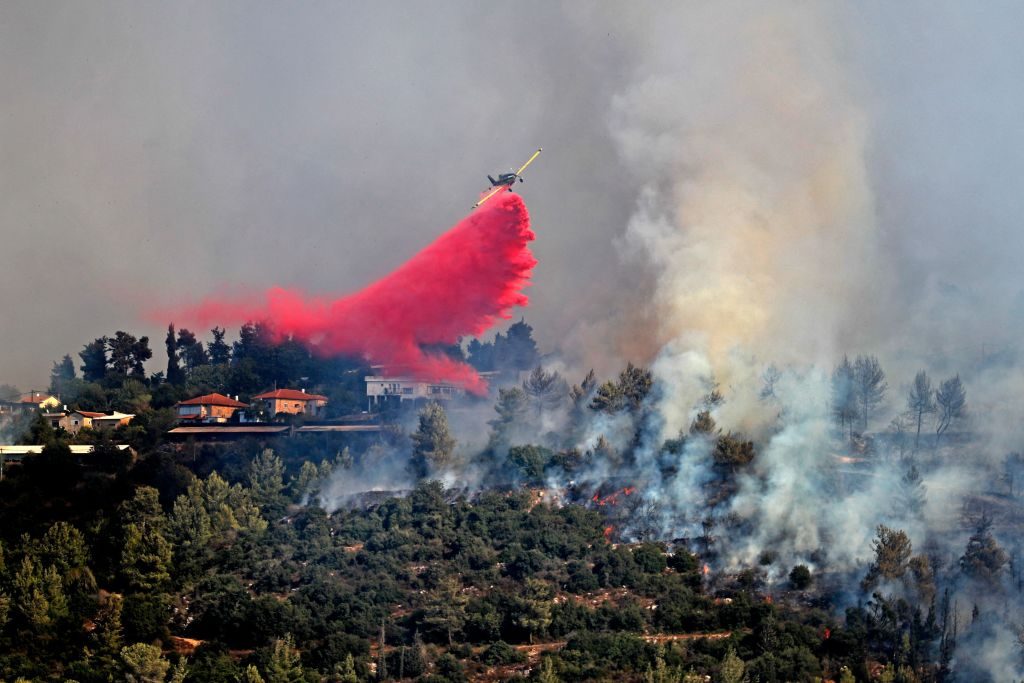 A firefighting plane works on extinguishing a forest fire at the Jerusalem mountains near Shoresh, on August 16, 2021.  (AHMAD GHARABLI/AFP via Getty Images)

Israeli Prime Minister Naftali Bennett directed the Defense Ministry and the Israeli military to continue giving all necessary assistance to the firefighting and rescue efforts, the Prime Minister’s Office said in a statement.

Ten firefighting planes had been deployed to the area. He also ordered an evaluation into whether there are additional Air Force capabilities that could be utilized in the effort to bring the fire under control.

He also instructed the Public Security Ministry, together with the National Security Council, to appeal for international assistance in extinguishing the fires.

Israeli Foreign Minister Yair Lapid spoke with his Greek counterpart, Nikos Dendias, on Monday evening to coordinate help. Requests for aid have also been sent to Cyprus, Italy, France and other countries in the region.

Bennett stressed the importance of saving lives by evacuating communities and institutions on time.

The Fire and Rescue Services said Monday that some 17,000 dunams (6.5 square miles) had been damaged so far in the fire, which began a day before.

Israel Fire and Rescue Services chief Dedi Simchi said the fire was the same scale as the Carmel Forest fire of 2010, which killed 44 people and devastated massive swaths of Israel’s northern region.