“If Trump and Pompeo are not tried in a fair court for the criminal act of assassinating General Soleimani, Muslims will take our martyr’s revenge,” Raisi said in a speech on Monday.

“The aggressor, murderer and main culprit – the then president of the United States – must be tried and judged under the law of retribution, and Allah’s ruling must be carried out against him,” Raisi demanded. 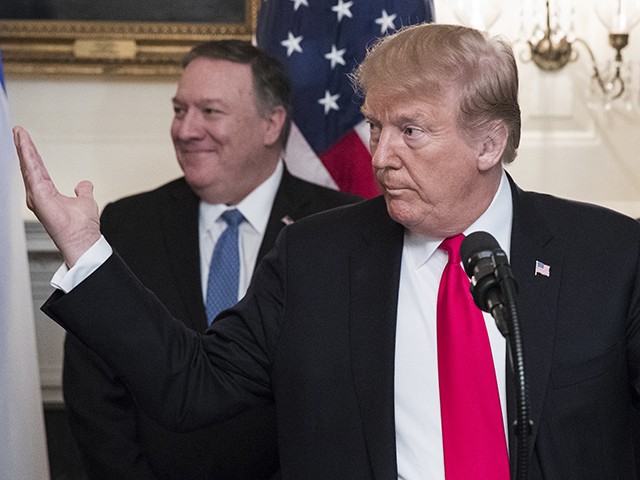 “I will tell all U.S. leaders that without a doubt the hand of revenge will emerge from the sleeve of the Muslim nation,” he railed. 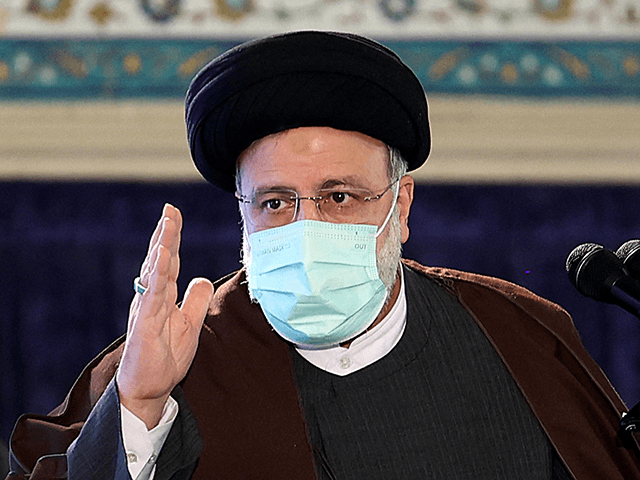 Iranian President Ebrahim Raisi delivers a speech during a ceremony in the capital Tehran, on January 3, 2022, commemorating the second anniversary of the killing in Iraq of Iranian commander Qasem Soleimani. (Photo by ATTA KENARE/AFP via Getty Images)

Reuters assumed Raisi was referring to the Iranian theocracy’s interpretation of Islamic sharia, which calls for the execution of murderers unless the families of the victims agree to accept financial restitution.

Raisi spoke at an event in the Grand Mosalla of Tehran that included “singing, reciting of poetry, flag-waving, and speeches” to mark the second anniversary of Soleimani’s death.

The event, part of a week-long commemoration that began on Friday, was attended by high-ranking officials from both Iran and its clients and allies, including Syria, Yemen, and the Palestinians. 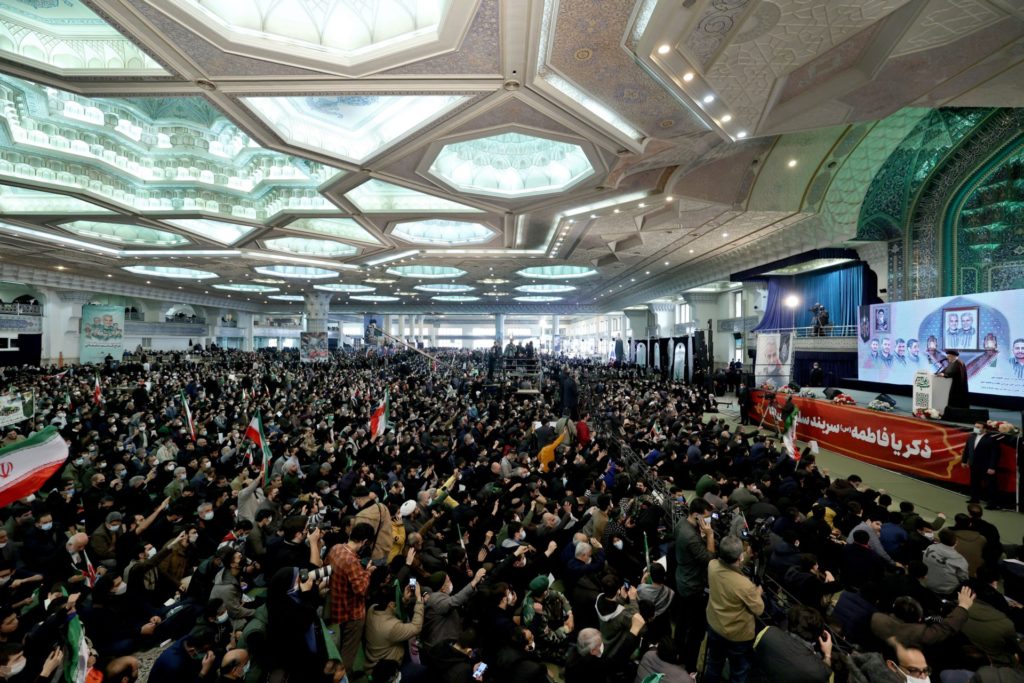 Iranian President Ebrahim Raisi (R) delivers a speech during a ceremony in the capital Tehran, on January 3, 2022, commemorating the second anniversary of the killing in Iraq of Iranian commander Qasem Soleimani and Iraqi commander Abu Mahdi al-Muhandis in a U.S. raid. (Photo by ATTA KENARE/AFP via Getty Images) 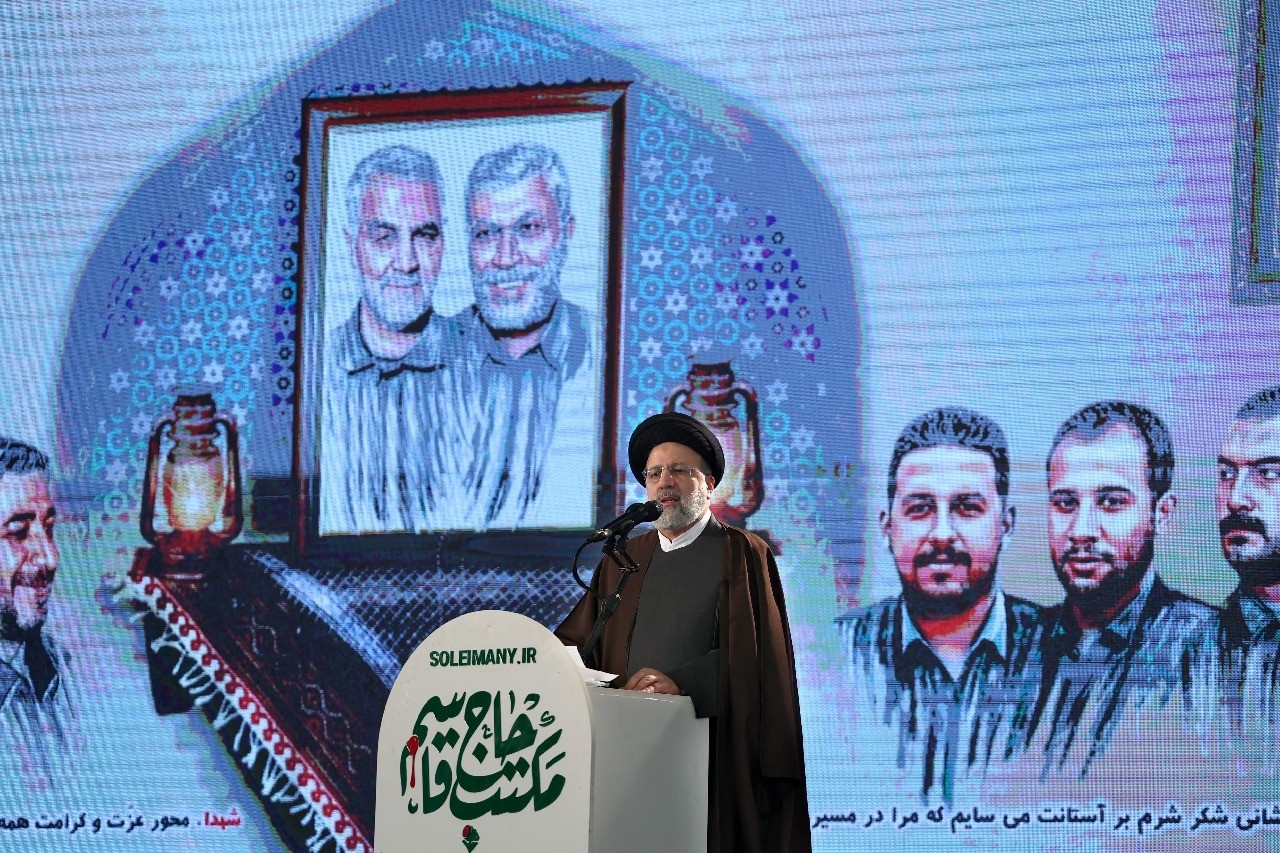 Iranian President Ebrahim Raisi delivers a speech on January 3, 2022, the second anniversary of the killing in Iraq of Iranian commander Qassem Soleimani and Iraqi commander Abu Mahdi al-Muhandis in a US drone strike. (AFP)

Iran also sent a letter to the United Nations demanding action against the United States and Israel for Soleimani’s death, and prepared a list of 127 “suspects” it wants to charge. 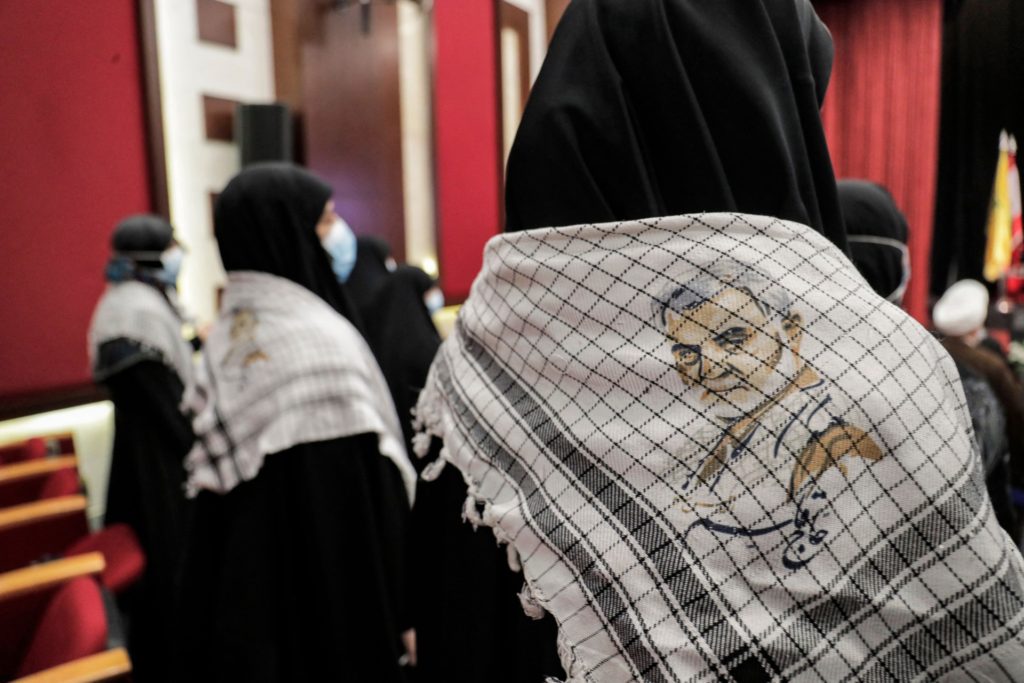 Women wear neckscarves showing an image of Qasem Soleimani, the slain top commander of the Iranian revolutionary guard corps (IRGC), during a memorial service marking the second anniversary of his death alongside Iraqi commander Abu Mahdi al-Muhandis in a U.S. raid, at a hall in a school in the southern suburb of Lebanon’s capital Beirut on January 3, 2022. (Photo by ANWAR AMRO/AFP via Getty Images)

The terror masters of Tehran are not quite feverish enough to think any of their wild demands will be met, so they tried taking matters into their own hands, with deadly intent but not much effect beyond inconveniencing the tech support staff of a newspaper in Israel:

Two armed drones were shot down on Monday as they approached an Iraqi military base hosting U.S. forces near Baghdad’s international airport, Iraqi security sources said.

Late on Sunday, Yemen’s Iran-aligned Houthi movement seized a United Arab Emirates-flagged cargo vessel which it said was engaged in “hostile acts” but which the Saudis said was carrying hospital equipment.

In Israel on Monday, the Jerusalem Post newspaper said its website had been hacked in what it called an apparent threat to the country, with an illustration that appeared to recall Soleimani.

Another drone attack against an Iraqi base hosting American troops was thwarted on Tuesday, this time involving a pair of explosive-laden drones approaching the Ain al-Asad airbase in western Anbar province.

“These are attacks against Iraqi installations and an attack against the Iraqi people and the military that protects them. We maintain a minimal footprint on Iraqi bases – the coalition no longer has its own bases in Iraq,” an official with the military coalition fighting the Islamic State in Iraq noted.

Soleimani was killed in Baghdad, Iraq by a U.S. airstrike in the early hours of 2020, along with the leader of one of the violent Iraqi Shiite militia groups Soleimani cultivated, Abu Mahdi al-Muhandis of the Kataib Hezbollah terrorist gang.

Shiite militia groups had been responsible for rocket attacks on several bases housing U.S. troops in Iraq. One of those attacks killed a U.S. military contractor. Soleimani was also implicated in a two-day siege of the U.S. Embassy in Baghdad.

Iran immediately went to work lionizing Soleimani and attempting to get revenge against the United States for his death. After launching an illegal missile attack on Iraq, Iranian forces nervous about a U.S. response shot down a Ukrainian passenger jetliner shortly after it took off from Tehran, murdering all 176 people aboard.  The Iranian regime concocted a story that the plane exploded due to “sudden technical issues” and took outrageous steps to conceal the evidence of the shootdown.

On Monday, a court in Ontario, Canada awarded $83.9 million in damages, plus interest, to the families of six people killed aboard the Ukrainian International Airlines plane in Tehran. Lawyers for the families said they would work to seize Iranian assets in Canada and other countries to pay off the damages.