Saudi Aramco, the extremely wealthy national oil company of Saudi Arabia, on Wednesday announced the establishment of a “Non-Metallic Excellence and Innovation Center” (NEXCEL) in Beijing to promote the use of alternatives to metal in construction projects.

NEXCEL is a joint endeavor with the China Building Materials Academy, whose vice president Zhan Yanjing hailed the partnership with Aramco as a “historic” opportunity to develop “green, low carbon solutions” for “global sustainable development.”

“We have been developing and deploying nonmetallic solutions within our own operations for more than 20 years as they offer superior lifecycle cost, efficiency and environmental advantages over their metal alternatives. Given the advantages of non-metallics, we believe that this new Center of Excellence for Nonmetallic Building Materials will catalyze a wide range of exciting new opportunities,” said Aramco Senior Vice President of Technical Services Ahmad al-Sa’adi.

Saudi Aramco has a similar partnership in the United States with the American Concrete Institute, and in the United Kingdom with TWI Global and ADNOC, the Abu Dhabi National Oil Company.

The general idea behind the initiative is developing polymers based on petrochemicals that can replace materials such as carbon steel, which require a large volume of carbon dioxide emissions to manufacture. Advocates of non-metallic construction argue the buildings will last longer and be more energy-efficient than structures built on metallic frameworks. Among other benefits, polymers are more resistant to corrosion than metals. 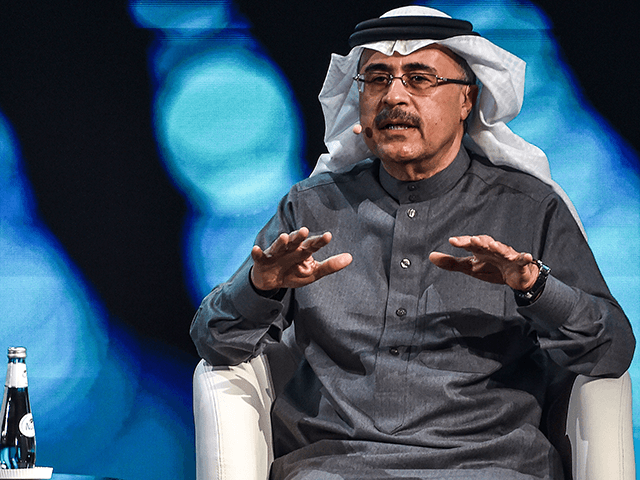 Aramco, the world’s largest oil company, happens to have a large supply of petrochemicals ready to go. The company says it has developed non-metallic construction techniques that perform well, with reduced environmental impact, in the harsh Saudi desert.

Construction firms have been reluctant to embrace non-metallics because they are considerably more expensive, including heavy up-front costs for switching to the construction equipment required to deploy them. There is also some unease about the lack of international standards for non-metallic construction compared to long-established standards for iron and steel.

Aramco’s announcement of NEXCEL tacitly acknowledged these reservations by listing “standards development and adoption” would be among the center’s top priorities. The emphasis on promoting more “joint projects in research” and “global collaboration” suggests the effort to make non-metallics more cost-effective continues.

A shift to petrochemical-based construction materials would certainly be a welcome development for a gigantic state enterprise that constantly worries about sliding demand for fossil fuels in the climate change era.

Arabian Business on Wednesday also saw the announcement of the NEXCEL project as part of Saudi Arabia’s growing economic relationship with China:

A total of 277 deals were struck, with $23.7bn pooled towards 199 projects, along with 24 trade projects worth $423 million with Saudi Arabia’s Red Sea integrated smart energy investment project among the projects that will receive Chinese money pledged at the event.

Shifting the Saudi economy away from its dependence on oil sales to traditional customers was a major element of the reform package promoted by the current Crown Prince and de facto ruler of Saudi Arabia, Mohammed bin Salman. As for diversifying its customer base, the Saudis now sell about a quarter of their oil to China, and on Wednesday Aramco announced a deal to supply almost half of Poland’s oil, a bold move into energy rival Russia’s backyard.