A former U.N. nuclear inspector said Iran’s nuclear breakout time is now zero and Tehran has accumulated enough highly enriched uranium to build a bomb, although it is not clear just how long it would take the Islamic Republic to assemble it.

“Iran has reached this critical period where its breakout time is zero. And what that means is that now it has enough highly enriched uranium to fashion a nuclear weapon,” David Albright, who worked as an inspector for the International Atomic Energy Agency (IAEA) in the 1990s, told the London-based Iran International, an Iranian opposition site.

Albright, who serves as the president of the Institute for Science and International Security, a private organization based in Washington that monitors nuclear proliferation, said the timing would depend on the type of weapon.

“It may not be as long as some have argued. We don’t know how quickly Iran could make nuclear weapons today,” he said.

“They may choose to make a crude nuclear explosive to detonate underground, or to deliver it crudely or through crude methods like truck or ship. That could happen over the course of several months, less than six months,” Albright said.

“They may want, on the other hand, to focus on just building a warhead for a ballistic missile; that could take longer, a year or two. So again, the critical thing is that they have reached the zero-breakout time,” he said.

Both U.S. and Israeli officials have said that Iran is only a few weeks away from breakout, the time that it will have accumulated sufficient fissile material for a first bomb, but Albright maintains the breakout point is zero.

He said that this “major milestone” was advanced quickly in the absence of a nuclear pact.

He went on to say that a strategy of intense pressure would involve more support for Israel and other allied countries in the Middle East, “to push harder against Iran.”

In a report published Monday, the U.N. nuclear watchdog found that Iran’s stockpile of enriched uranium had swelled to more than 18 times the limit stipulated in the Obama-led nuclear deal.

According to the IAEA’s latest estimates, “as of May 15, 2022, Iran’s total enriched stockpile was 3,809.3 kilograms,” and the regime is continuing to breach the deal’s 3.67 percent limit. The 2015 nuclear deal between Iran and world powers capped at 300 kilograms (660 pounds) of a specific compound, the equivalent of 202.8 kg of uranium.

The world should thank Israel for the assassination of Iran’s nuclear mastermind Mohsen Fakhrizadeh, a senior Israeli official said. https://t.co/rXiICEA5eK

Iran‘s stockpile of 20 percent enriched uranium is now estimated to be 238.4 kilograms, according to the IAEA, up 56.3 kilograms since its last report in March. Uranium enriched to 60 percent has increased nearly 10 kg to 43.1 kg.

Some 90 percent enrichment is weapons-grade.

The report comes on the heels of an impasse at efforts in Vienna to resuscitate the tattered 2015 nuclear deal, which the Trump administration withdrew from in 2018.

The IAEA also said it had questions that were “not clarified” regarding nuclear material found at three sites that was undeclared.

Israeli Prime Minister Naftali Bennett on Tuesday published documents he said proved Tehran had spied on the IAEA in an attempt to cover its tracks.

Bennett tweeted a Google Drive link to the Persian-language files, which were spirited out of Tehran by Mossad agents in 2018, and according to the Israeli leader prove that Iran used information from classified documents stolen from the UN nuclear watchdog as part of a cover-up. 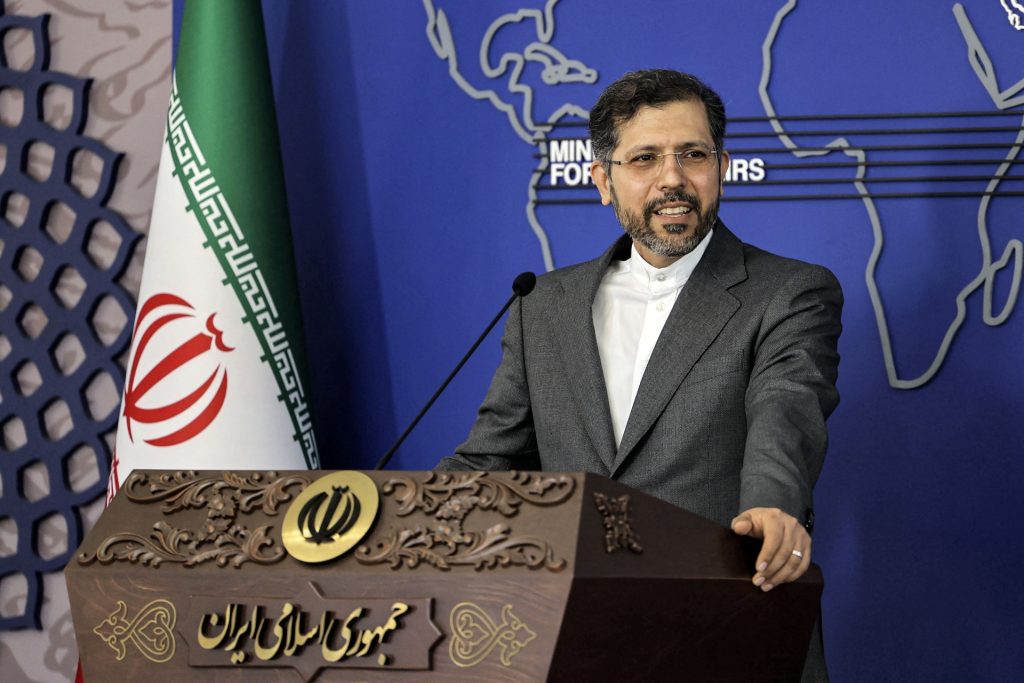 “I’m holding the proof of your lies right here in my hands,” he said, holding up copies of the documents. “You see, after Iran stole classified documents from the UN’s Atomic Agency, Iran used that information to figure out what the atomic agency was hoping to find, and then created cover stories and hid evidence to evade their nuclear probes.

“So how do we know this? Because we got our hands on Iran’s deception plan a few years back. And it’s right here in my hands,” Bennett said.

“Here it is, in the Persian language, hundreds of pages marked with the stamp of Iran’s Ministry of Intelligence,” Bennett said.

“Iran lied to the world, Iran is lying to the world again right now, and the world must make sure that Iran doesn’t get away scot-free,” Bennett warned.