Following a White House disavowal of apologies by the U.S. embassy in Egypt on 9/11 for insulting Islam–a disavowal which was itself soon contradicted by the State Department–the embassy has begun deleting tweets from its Twitter feed (@USEmbassyCairo).

The embassy–and the Obama administration–had been criticized for apologizing for the “abuse” of religious freedom, evidently referring to an anti-Islamic film made by a private individual in the U.S., which was the pretext used by Al Qaeda sympathizers to storm the embassy today while Egyptian authorities did nothing.

Following the White House’s statement that the embassy’s apology had not been “cleared by Washington,” the embassy began deleting apologetic statements from its Twitter feed. The following tweets are among those that have been erased:

We condemn the continuing efforts by misguided individuals to hurt the religious feelings of Muslims–
US Embassy Cairo (@USEmbassyCairo) September 11, 2012

@BrianGriffiths we did not apologize to anyone because we did nothing–
US Embassy Cairo (@USEmbassyCairo) September 11, 2012

The longer, original apologetic statement has not been deleted from the State Department’s website. UPDATE: Deleted, too. UPDATE: No, just moved. 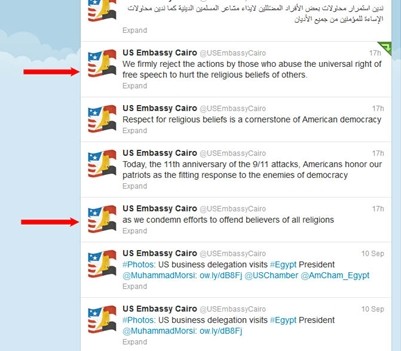