Palestinians have refined a new form of homicide in recent weeks: driving vehicles into crowds of Israelis. This has the advantage of permitting Palestinian leaders to claim these are merely “accidents” to the Government of Israel while celebrating the attacks as “martyr operations.”

Cartoons, posted by what pass as Palestinian news agencies, establish the grizzly celebration of these murders as “heroic” acts which should be encouraged.

Two definite cases of car jihad have taken place in Jerusalem with a possible third attack in a nearby suburb:

Various Palestinian “news agencies” began posting cartoons celebrating the attacks on Facebook. These are but a few examples that appeared on November 5.

In the first cartoon, a terrorist in a Hamas-like headband accelerates towards a bloodied Star of David.  In other words, a Palestinian terrorist purposely targets Jews with his car.  In the background, the dome of the Al-Aqsa Mosque is seen in grey.  The text commands: Step on it and take revenge for Jerusalem.  It includes a religious hashtag in Arabic, though #CarJihad would be more appropriate. 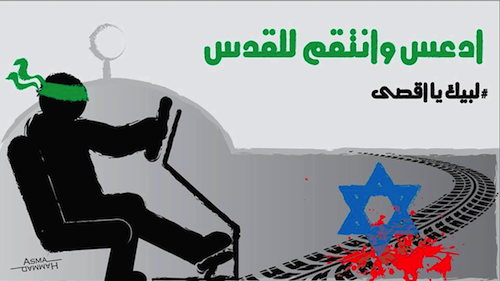 The second cartoon depicts a luxury car with the Al-Aqsa Mosque as the grill of the vehicle and the roof is drawn as the Dome of the Rock.  The text reads:  Killing of an Israeli by a running-over operation in Jerusalem.  It specifically references the murder of the Druze police officer on November 5.

The next cartoon shows an odometer with “Jerusalem” as the mileage.  Increasing kilometers are denoted with larger and larger maps of Israel.  In other words, as the terrorist accelerates towards his human targets, he gets closer and closer to reaching “Palestine” which is shown as the entire map of Israel.  The pointer on the speedometer is a rifle.  The text is a rhyme in Arabic and in English reads: Oh revolutionary, step on the gasoline until we return to Palestine. It includes the phrase “Revolutionary violence” in parentheses. 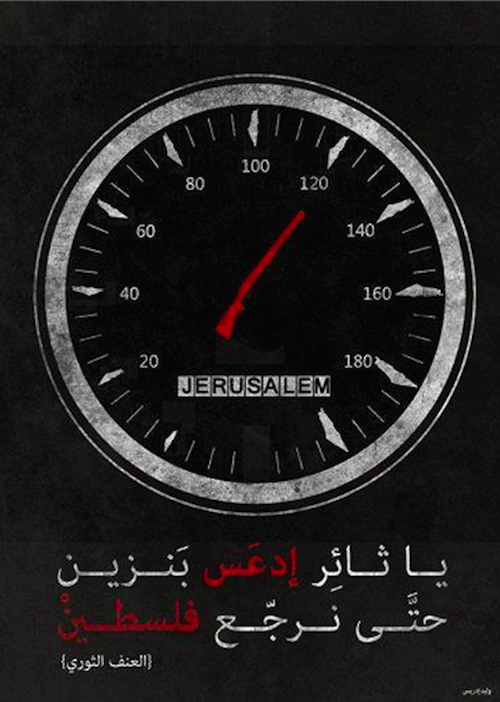 This last cartoon features caricatures of long-nosed Jews fleeing for their lives as a keffiyeh-clad terrorist speeds towards them in a car painted with the colors of the Palestinian flag.  It is blatantly anti-Semitic and deadly clear in its message. 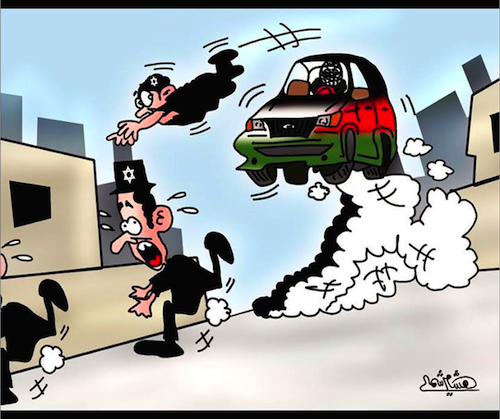 As Palestinians take to their vehicles to run over innocent people, and their leaders claim these are merely “accidents,” propaganda cartoons show their true purpose – murder via #CarJihad.