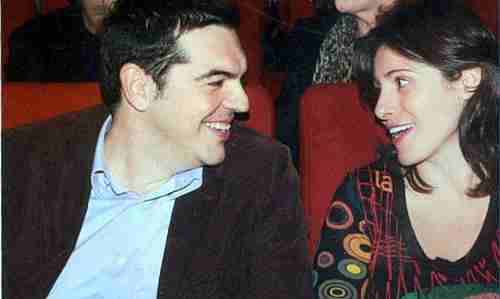 The girlfriend (or common law wife) of 40-year-old Alexis Tsipras, Greece’s new Prime Minister, seems to be a perfect fit for him. They’re both good-looking, and they share common radical far-left political beliefs.

38-year-old Peristera (Betty) Baziana was an activist in the Greek Community Party Youth in high school, where she met Tsipras, and joined him in protests and school occupations. They’ve lived together for 17 years, but don’t believe in marriage. Their first son, Pavlos, was born in May 2010. Their second son was born in June 2012, and was named Orpheus and Ernesto, after Ché Guevara, a hero of Tsipras. Greek Reporter

Greece’s radical far-left politician Alexis Tsipras has led his Syriza party to victory in what is being called a historic election, because of its implications for Europe and the eurozone. Tsipras’s campaign slogan had been “Hope is coming!” In a victory speech reminiscent of Barack Obama’s 2008 victory speech, when he promised that the world would be a different place on January 21, the day after he took office, Tsipras promised that “the period of austerity” is over:

Our priority from the very first day will be to deal with the big wounds left by the crisis. Our foremost priority is that our country and our people regain their lost dignity.

Leftists were dancing in the streets in Athens when the first exit poll results were announced, and they were joined by visitors from left-wing parties in Italy, Germany, Spain, and elsewhere. Voters were reacting to huge budget cuts and heavy tax rises during six years of crisis that has sent unemployment over 25 percent and pushed millions into poverty.

Here are some of the promises that Tsipras made during the campaign:

As I wrote several times during the various Greek crisis periods of the past years, there is no solution to Greece’s debt problem. Saying this did not require a crystal ball; it simply required doing some simple arithmetic. As we’ll discuss further below, obvious truths are simply ignored by everyone when they are not part of the narrative of either the left wing or the right wing. Now Tsipras has come up with his own non-solution.

Greece has already received some 240 billion euros in bailout loans. It needs an additional 10-20 billion euros in loans this year, starting in March, just to avoid bankruptcy — and that assumes that the austerity measures are kept in place. With Tsipras’s spending splurge, that figure could easily go up to 30-50 billion euros. Are Greece’s creditors, including the IMF and Germany, going to lend that kind of money to Greece to fund a spending splurge? The question answers itself.

However, there’s another side to this, and this is probably what Tsipras is counting on. Tsipras’s Syriza is an umbrella party for a number of far-left, communist and Marxist parties, who will not tolerate any compromise by Tsipras. So Tsipras will go to Brussels and say, “Hey help me out guys. If you don’t give me the 50 billion euros I need, then my government will collapse, Greece will be forced to leave the eurozone, and that will be a disaster for you guys, because you need Greece more than Greece needs you.” Kathimerini and BBC

The neo-Nazi Golden Dawn party, which has in the past demanded that anyone not of Greek ancestry be deported from Greece, has come in third place in the voting, at 6.3%. This is behind Syriza, at 36%, and New Democracy, at 28.2%. New Democracy is headed by the departing prime minister Antonis Samaras, and was the governing party until this election.

This is a remarkable showing for Golden Dawn, despite the fact that the party’s leader and most of its lawmakers are behind bars, facing charges of participating in a “criminal organization” accused of murders, brutal attacks on migrants and others, extortion and arson. These crimes include the Sept. 2013 murder of a leftist rapper, Pavlos Fyssas. AP and Kathimerini

When I heard Obama campaigning in 2008, saying that with his election the earth would heal and the tides would recede, and making other ridiculous promises, I did not think much of it, since politicians always say ridiculous things when they’re campaigning, and then they pull them back after the election.

After the election, when I heard Obama continue saying the same things, that the world would be a different place starting on January 21, then I knew we were in trouble, and the thought that came into my mind was, “Holy crap! If he really believes his campaign rhetoric, then he must be delusional.” Since then, Obama has had one foreign policy disaster after another.

So now Greece’s Alexis Tsipras is in the same situation, following an election in which his major campaign promises were, in effect: “After I’m elected, 2+2 will equal 5.”

Tsipras and Obama both have a common personality type that I began writing about frequently in 2007 (See “The nihilism and self-destructiveness of Generation X.”) I’ve seen this personality type frequently, almost always among Gen-Xers, not only in politicians, journalists and other public figures, but also in the computer industry, where I’ve personally seen it lead to disaster, as well as in my personal life.

I’ve written about many examples of this in the 12 years I’ve been developing Generational Dynamics. In the mid-2000s, it was perfectly obvious that there was a huge housing bubble, and I wrote about it constantly. I sold my own condo in November 2005, at the height of the bubble. But the problem is that a housing bubble does not fit the ideological narrative of either liberals or conservatives, and so the delusion was massive. Mainstream financial analysts, economists and journalists would say, “Housing prices can’t go down — people have to live somewhere,” and “Banks won’t foreclose — it’s not in their interest to do so” and “These housing construction firms know what they’re doing, and they wouldn’t be building houses if it were just a bubble.” It wasn’t until 2009 that mainstream economists began saying that there had been a housing bubble years earlier. Duh!

The personality type that I’m describing is common today in Generation-Xers, who drive public opinion, and I’ve seen in many of them the two major characteristics of someone with this personality type:

This is why such people are delusional. When a decision leads to bad results, it must be because other people are sabotaging it, and since the decision could not possibly have been bad, he doubles down on it. He knows with absolute certainty that 2+2=5, and when it doesn’t turn out that way, then other people are to blame, and he has to take additional steps to force 2+2 to be 5, which it never can be. Those additional steps create the disaster.

As an example, one disaster in the last decade was the financial crisis that followed from the collapse of the housing bubble that didn’t even exist because everyone has to live somewhere.

So in the days and weeks ahead, we’re going to see whether or not the radical left Tsipras is pragmatic or delusional. If he proceeds pragmatically, if he works for some compromise that everyone, including Brussels, the ECB, the IMF and the Germans, can go along with, thus ending the crisis, then he’ll turn out to be an intelligent politician and leader, which will surprise a lot of people, most of all me.

But if he doubles down, and pursues a policy of blackmailing Brussels and the Germans, saying in effect “You need me more than I need you, the eurozone needs Greece more than Greece needs the euro, and so I can do whatever I want, and you’ll have to go along with it,” then we can anticipate the worst of all possible scenarios. Bloomberg