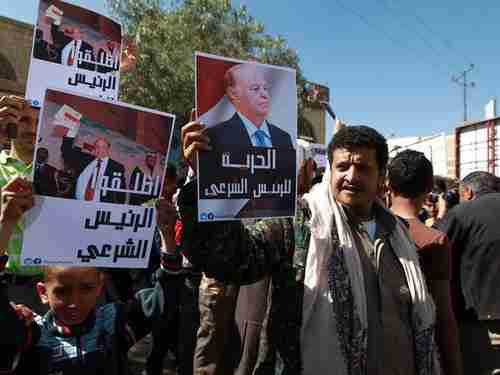 Anti-Houthi demonstrations in Sanaa on Saturday. The posters have pictures of Hadi (AFP)

Abdu Rabu Mansour Hadi, Yemen’s constitutional president, achieved a colorful escape on Saturday from his Houthi captors in Sanaa, and fled to his political stronghold in Aden, in south Yemen. From there, he issued a statement declaring that all Houthi decisions made since the September 21 coup were “null and illegitimate.”

The 9/21 coup by the Iran-backed Shia al-Houthi militias took control of the ministerial government functions in Sanaa, and forced the Sunni president Hadi to resign on January 21. It had been thought that the Houthis wanted Hadi to stay in office, where he could be controlled by the Houthis, who would then have the power but the not responsibilities of governing. Hadi’s resignation caused a power vacuum that has never been filled. The Houthis arrested Hadi and kept him prisoner in his home in Sanaa.

How did Hadi escape? It is already becoming an urban legend. One story is that he covered himself in a head-to-toe Muslim woman’s burka that exposed only the eyes, and pretended to be a woman. Another story is that he hid in the food truck when it came to deliver his food for the day. Another was that the Houthis let him go as part of a deal with the United Nations, which the U.N. denies.

From Aden, he issued a “presidential statement,” implying that he is retracting his resignation. He said that every Houthi decision and appointment must be reversed, and that all people abducted or under house arrest should be freed.

There are many questions about what Hadi is going to do next. Aden is a Sunni stronghold, and one possibility is that he may declare Aden to be the new capital of Yemen, and characterize Sanaa as a secessionist capital, which would amount to a declaration of war between the Shia Houthis and the Sunni militias supporting him.

Yemen is the home of Al-Qaeda in the Arabian Peninsula (AQAP). Last year, President Obama referred to Yemen as an administration success story, since the military was successfully using drone missiles to attack AQAP officials in cooperation with Yemen’s government, but without requiring US troops. Both the Houthis and Hadi are opposed to AQAP, and two AQAP members were killed in a drone strike on Friday. So apparently the drone strikes are continuing, which is kind of an ironic twist. Still, Yemen began deteriorating last year soon after President Obama’s statement last year, and the deterioration is continuing, with the possibility of war in sight, as part of the general deterioration of the entire Mideast that we have been reporting on. Yemen Online and Military Times

Nigeria says that its army has recaptured the town of Baga from Boko Haram terrorists after several days of fighting that resulted in “heavy casualties.” Baga was the site of a massive Boko Haram massacre last month. ( “10-Jan-15 World View — Up to 2000 Nigeria civilians killed in three-day Boko Haram massacre”)

According to the army, many Boko Haram militants had been killed, with some of them drowning in Lake Chad as they tried to flee from the approaching army.

Last month’s massacre at Baga was almost completely ignored by the international media when it occurred, while the murder in the same time frame of a few white reporters in the Charlie Hebdo attack in Paris received intense coverage around the world. Some political analysts suggested that the NY Times, NBC News and Al Sharpton consider a dead black person to be of no worth or interest whatsoever unless killed by a white cop.

Early this month, Nigeria announced that the February 14 presidential elections would be postponed until March 28 because of threats by Boko Haram to disrupt the election to terrorist attacks. The political opposition of the current president, Goodluck Jonathan, wondered why the security threats would be any better on March 28, and accused the government of postponing the election to give Jonathan time to fix the election.

The recapture of Baga has a symbolic value, and the army will now claim that it is a success that will make the March 28 election safer.

International assistance is increasingly flowing to Nigeria, Cameroon and Chad to fight Boko Haram. On Saturday, a consignment of military equipment from the United States military arrived in Cameroon. BBC and Osun Defender (Nigeria) and VOA