Today marks the third day in ISIS’ latest offensive against a string of Christian towns and villages in northeast Syria. According to Aziz Mirza, with the Syriac Cultural Association, speaking from Qamishli by phone today, ISIS is continuing to push forward in trying to take control of this predominantly Assyrian Christian region.

Mirza said an estimated 350-400 people are missing from 12 different villages, but it has been very difficult to confirm those numbers because all cell phones appear to be confiscated. When relatives have tried calling, members of ISIS answer the phones, Mirza said.

Kurdish and Christian fighters have been working together for the past year and half to protect this area from ISIS. The Christian fighters, who operate as the Syriac Military Council, had forces in 3 villages: Tel Hormizd, at the southern end of the Khabur valley, Tel Shamiram, at the northern end, and Tel Tawil on the northeast flank. The SMC and Kurdish (YPG) forces had been there since Feb 7, but with the pre-dawn attack that was launched on February 23rd, ISIS has now retaken control. So far, the Syriac Military Council has lost four fighters with another 12 deaths suspected but not yet confirmed.

ISIS is currently focusing its efforts on the town of Tel Tamar, which is the regional center. Yesterday, ISIS set off three car bombs just outside the barricades protecting Tel Tamar, near where the Syriac Military Council forces and Kurdish forces are headquartered. There were no casualties. Mirza also said that fighting ebbed somewhat on Tuesday because of heavy rains, but today, February 25, it was back at full force.

In a separate phone call, Sewerios Malke from the Syriac Military Council confirmed that ISIS is still trying to take control of the region and that they are trying to cross the Khabur river. The Kurdish and Syriac forces have been able to hold them back so far but it is uncertain how much longer that can last. He estimates the number of ISIS fighters at several thousand.

According to a Combined Joint Task Force Operation Inherent Resolve News Release, U.S. and coalition military forces have carried out airstrikes in the Khabur River region where this fighting is going on. Between 8 a.m. yesterday (Feb 24) and 8 a.m. today (Feb 25), local time, fighter and remotely piloted aircraft conducted nine airstrikes in Syria: 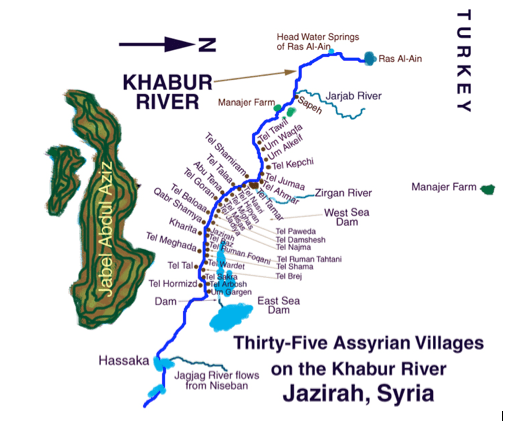 However, both Malke and Mirza asserted that there were no airstrikes in the Khabur region, only further south, 22 kilometers below Qamishli. The stark contrast between the stories of hundreds or even thousands of ISIS fighters attacking villages, taking as many as 400 hostages, and three U.S. airstrikes in the same region that struck only one vehicle, suggests the U.S. may be missing the target.

Some have argued that without troops, or at least advisors, on the ground, there is insufficient intelligence to guide airstrikes. In addition, representatives of the Syriac forces have been making the case in Washington for the past several years that their location in Syria made them particularly vulnerable to attack by ISIS and they could be key players in the fight against ISIS. They were therefore lobbying to be included in the equipping and training of opposition forces in Syria. The State Department has confirmed that the Syriac forces were not included in the first round of training.

Katie Gorka is the president of the Council on Global Security. @katharinegorka.