JERUSALEM, Israel — Israeli Minister of Defense Moshe “Bogie” Ya’alon told legal scholars at a conference on the laws of war that terrorists who failed to destroy Israel were resorting to new methods, which included “using our law against us.”

Speaking without notes, Ya’alon recalled the efforts of Hezbollah and other terror organizations to position weapons in civilian homes–“with Iranian engineers’ help”–creating a fatal dilemma for Israeli soldiers, who were forced to create “collateral damage” in southern Lebanon and the Gaza Strip. He warned that Israel would make the same choice in future.

Ya’alon recalled facing criticism for his actions–including hostile allegations of war crimes in the UK and elsewhere. He said soldiers were prepared to sacrifice a trip to London to defend their lives–but the standard, nonetheless, was unfair.

“We find ourselves in a war after the war,” Ya’alon said of international institutions such as the UN Human Rights Council (UNHRC). The political bias of the UNHRC made clear that its purpose was not to enforce human rights standards, but to delegitimize Israel and undermine its ability to defend itself.

“We have to defend ourselves [against] biased political commissions–even international organizations with nice-sounding names,” he said, while upholding strict standards.

Israel, he said, would punish violations of the law by its own soldiers–but would also resist “blood libels” such as the false allegations of a “Jenin massacre” during Operation Defensive Shield, a successful counter-terror operation in 2002.

The two-day conference, “Towards a New Law of War,” was convened in Jerusalem by the noted legal agency Shurat HaDin, which sues terrorist organizations and state sponsors of terror on behalf of terror victims and their families. Ironically, there was an attempted terror attack near the site of the conference on the morning of the first day of meetings. Ya’alon closed the conference after an introduction by Shurat HaDin founder Nitsana Darshan-Leitner, who noted that he had come from intense negotiations over Israel’s coalition government–“where the laws of law do not apply,” she joked.

Ya’alon thanked Shurat HaDin for its legal advocacy against terrorism in the international arena. 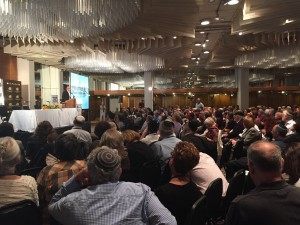 Ya’alon  has served as Israel’s Minister of Defense since March 2013. He is known for his military expertise and especially for his strategic patience. He is a frequent critic of the strategic postures adopted by other western democracies, especially the urgency with which they seek immediate solutions to problems that may actually be intractable. During last summer’s war in Gaza, Ya’alon is thought to have advised Prime Minister Benjamin Netanyahu not to reconquer the Gaza Strip.

Following his appointment, Ya’alon built an unlikely partnership with U.S. Secretary of Defense Chuck Hagel, who was previously considered anti-Israel but who Ya’alon respected as a career soldier and a reliable source of military hardware that the Obama White House might otherwise have been inclined to deny.

Ya’alon has considerably less respect for Secretary of State John Kerry, whom he called “messianic” in a private conversation, leading to a public spat in 2014.

In an interview with Breitbart News in 2011, Ya’alon warned that Iran’s ultimate goal was to destroy the United States: “[Israel is] only the minor Satan. America is the great Satan. What is America? It is the West, led by the United States. Their aim is to wipe Israel off the face of the map on their way to defeating America.” He also noted Iran’s extensive involvement “behind the scenes” in providing weapons to Palestinian terror organizations for use in attacks against Israeli civilians.

More recently, Ya’alon has criticized the Iran deal being negotiated by the Obama administration, as well as the general weakness of U.S. foreign policy in the region, saying earlier this year: “I hope the United States comes to its senses.” He added hat Israel cannot rely on the U.S. to follow through on earlier threats to use military force, if necessary, to stop Iran from becoming a nuclear-armed power, and has warned that Israel must be prepared to take military action on its own.

Ya’alon told the conference: “Those who claim that this fight is not fair because democracy cannot fight radical terror organizations–I don’t agree with it. In some cases, we might take certain steps…in order to defend ourselves. We should be sure that we can look at ourselves in the mirror….We should be sure that it is a military necessity, that we consider costs and benefits.”

He added that when President Harry S. Truman was asked about the cost of dropping nuclear bombs on Japan, killing hundreds of thousands, he replied that against the cost of invading Japan, “it was a moral decision.”

The task was to convince the Israeli public to support effective military action, then the broader Western world.

“I am sure we will prevail,” Ya’alon concluded.