In a surprise, Senegal joins a beleaguered Saudi coalition in Yemen 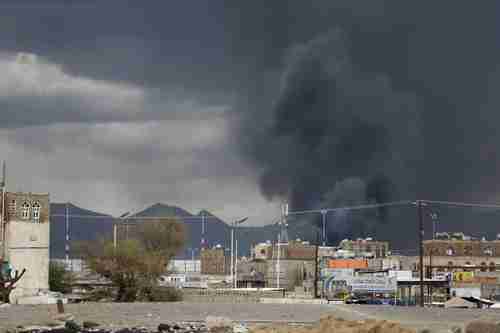 Aftermath of Saudi airstrike on Sanaa airport on Monday (Reuters)

In a surprise announcement, Senegal’s foreign minister on Monday said that the country will be send 2,100 troops to Saudi Arabia as part of an international coalition fighting against the Houthis in Yemen.

Since Saudi Arabia has not yet committed ground troops to Yemen, it is not clear what the Senegalese troops will be doing.

According to the foreign minister, “The international coalition is aiming to protect and secure the holy sites of Islam, Medina and Mecca.” These two cities in Saudi Arabia are heavily guarded by Saudi troops, and so the implication is that the Senegalese troops will guard the two cities, freeing up the Saudi troops. This would mean that Senegal is stationary guards, rather than the combat troops that the Saudis really need.

The reason that Senegal’s announcement was a surprise is that Senegal is on the west coast of Africa, which is many, many worlds away from Yemen, which is east of the east coast of Africa. Furthermore, many young people in Senegal are against sending Senegalese to far-away foreign wars, particularly since the cities of Mecca and Medina do not appear to be threatened by the Houthis in Yemen. However, Senegal depends on aid from Saudi Arabia, and so this is a way to suck up. BBC and Washington Post

Pakistan and Saudi Arabia appear to reconcile over Yemen

The Kingdom of Saudi Arabia now has a number of countries in its coalition: Bahrain, Kuwait, Qatar, UAE, Morocco, Egypt, Jordan, Sudan, Senegal.

These countries are contributing warplanes to the effort, but none of these countries has agreed to send combat troops to Yemen, and two of the major Sunni Muslim countries, Pakistan and Turkey, are missing from the list.

Saudi Arabia received a particularly harsh blow a month ago, when Pakistan’s parliament passed a resolution calling on the government to remain neutral between Saudi Arabia and Iran in the Yemen conflict.

As we reported at the time, the repercussions began immediately, beginning with a blistering condemnation by the United Arab Emirates (UAE). There are two million Pakistanis living in Saudi Arabia, and they contribute $4.73 billion per year to Pakistan through remittances, so there have been widespread fears of retaliation directed at Pakistanis working in the Kingdom.

However, Pakistan’s top civil and military leadership met with Saudi authorities last week, and the two countries appeared to reconcile. According to the statement, “Saudi Arabia’s next move in the region, including any possible offensive, will materialize only after mutual consultation.” What this means is that if the Saudis want Pakistan’s help, then they should consult with Pakistan and get mutual agreement before taking any action.

Based on that commitment, Pakistan has reversed its earlier stance of neutrality, and will provide military assistance. According to the statement:

All the matters between Pakistan and Saudi Arabia over the Yemen war have been settled amicably. … Without ground operations, no one can establish the government’s writ in the conflict zone. […]

Pakistan cannot remain a bystander if efforts are made to destabilize Saudi Arabia.

However, it is not clear whether Pakistan will provide combat troops, as Pakistan is promising only to provide military assistance, including equipment for fighting in the tribal areas of Yemen.

The only public mention of Pakistani troops was related to the reinstatement of Abdu Rabu Mansour Hadi, who was president at the time of the Houthis’ coup. “They also talked about the Pakistani armed forces’ role in Yemen after Hadi is [properly] reinstated,” according to the statement. Not mentioned is the fact that reinstatement of Hadi may not occur at all, or not before additional months of fighting. Gulf Times and Foreign Policy

Reports over the weekend said that Saudi troops had landed in the southern port of Aden.

The Saudis now say that those are Yemeni troops who were returning to Yemen from Gulf Arab countries where they had been retrained for combat. According to the Yemen government in exile in Riyadh: “It’s a group of the Yemeni forces. We retrained them, and we send them to organize things. We are now training more, and we are sending more.” Reuters