ISIS has had a complicated relationship with poultry. Back in April, they were reportedly snatching boxes of frozen chicken away from starving people and burning them, because the chicken allegedly failed to meet the caliphate’s religious dietary standards. Now the UK Daily Mail reports that ISIS is conscripting chickens into service as suicide bombers.

“Members of the terror group operating in and around the city of Fallujah are said to be strapping explosive belts to chickens, which are then encouraged to wander into enemy camps,” the Daily Mail reports. “Once the chickens are successfully within striking distance without having aroused suspicion, the ISIS extremists apparently use remote controls to set off the devices, killing all those close by.”

There were also reports of a goat being employed to carry a bomb into a Kurdish base in the long-contested Syrian city of Kobane.

Photographs of chicken bombs have been posted online by both pro- and anti-ISIS users. ISIS supporters say the hen grenades are evidence of the terror state’s cunning and resourcefulness, while detractors make the case that such bizarre weapons are evidence that the Islamic State is getting desperate and running low on munitions. 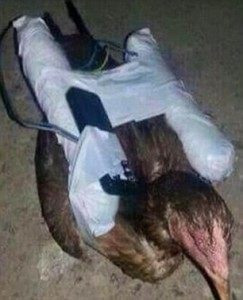 “ISIS will use whatever means they can to bring death and destruction. Using animals has little military value – it is just another example of how their twisted minds enjoy dreaming up bizarre ways to kill people,” said a British man who was fighting alongside the Kurds in Syria.

Further evidence of ISIS ammo shortages is presented by the UK Daily Star: “Fighters are now resorting to making their own bombs and mortar shells using gas canisters and fertiliser smuggled over the border from Turkey. Photos also show the terrorists using shopping trolleys and arming them with deadly machine guns.”

The Daily Mail notes that the authenticity of these photographs, and reports of suicide chicken deployment, have not been verified.