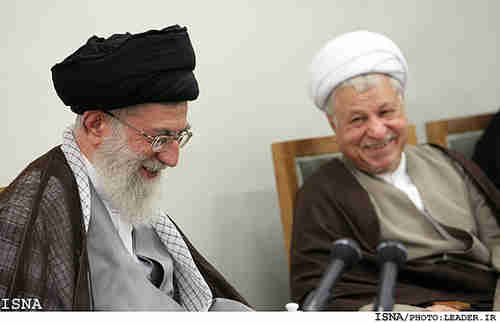 In what is being called a major admission by Iran’s leadership, Hashemi Rafsanjani, the head of Iran’s Expediency Council and the political rival of Iranian Supreme Leader Seyed Ali Khamenei, earlier this week admitted that Iran has been developing nuclear weapons since the 1980s. In a televised interview, Rafsanjani explained that the work began because Iran was at war with Iraq, and Iraq had begun developing its own nuclear facilities at Osirak. Iran had attempted to bomb and destroy these facilities early in 1980, and they were finally destroyed by Israel’s fighter jets in late 1980.

According to Rafsanjani, the early work that was done was for peaceful use of nuclear energy, but also provided the option of quickly developing a nuclear weapon if that became necessary:

As I have said, when we started the [nuclear] work, we were at war, and we wanted to have such an option for the day our enemies wanted to use nuclear weapons. This was [our] state of mind, but things never become serious.

However, we took seriously the non-military uses [of the nuclear project], and so we invested money and did a great deal of work. We worked in various areas and also taught a great deal. We dispatched students and invited scientists and many other things of this sort. The principle of our doctrine was the use of nuclear [energy] for peaceful purposes, even though we never abandoned [the idea] that if we were some day to face a certain threat, and if it became necessary, then we would have the option of going to the other side [i.e. to develop nuclear weapons]. But we did not have a plan to do this, and we never deviated [from civilian use].

In addition, Rafsanjani acknowledged in this interview that Iran received nuclear technology from Pakistan’s nuclear scientist Abdul Qadeer Khan. Khan built Pakistan’s first nuclear weapon, and also provided nuclear technology to North Korea. Rafsanjani also acknowledged that from the onset there has been a comprehensive clandestine nuclear plan, including construction of secret sites, enrichment of uranium, manufacture of centrifuge parts, laser technology, and the heavy water reactor. Much of this work was performed when Rafsanjani himself was Iran’s president, from 1989 to 1997.

The reason that this is a big deal is that these admissions may mean that Iran has been violating the terms of the United Nations Nuclear Non-Proliferation Treaty, to which Iran is a signatory. That admission would have affected the nuclear agreement negotiations, and also contradicts the claims of Supreme Leader Ayatollah Seyed Ali Khamenei that he supposed issued a fatwa in October 2003 saying that any development of nuclear weapons is forbidden. Memri and Times of Israel and National Council of Resistance of Iran

The debate over the 2003 Iraq war continues to be almost unbelievably bizarre. People who say that the war should not have occurred almost all suffer from mental deficit that keeps them from grasping the logical contradiction: The only reason we know today that Saddam Hussein was not developing WMDs is because of the war. So if the war had not occurred, then Saddam could have freely developed WMDs, and we presumably would not know to this day whether he was doing so — which he almost certainly would be doing.

I have felt for a long time the people who need to apologize for the Iraq war are not the ones who supported it, but the people who opposed it. In 2003, almost everyone in the world had been convinced for years that Saddam was developing WMDs and was going to use them (again), so anyone who opposed the Iraq war needs to explain why he was willing to allow Saddam to kill tens or hundreds of thousands of people with WMDs.

We know why France’s prime minister Jacques Chirac, Russia’s president Vladimir Putin, and U.N. secretary general Kofi Annan were all opposed to the Iraq war. They were all implicated in skimming hundreds of millions of dollars from Iraq’s “Oil for Food” program. This was discovered when a list of the corrupt officials was found in Iraq’s Oil Ministry after the war. In other words, Chirac, Putin and Annan did not care how many people were slaughtered by Saddam’s WMDs; the three of them were just crooks that did not want their corruption to be discovered, no matter how many people were killed. As for Barack Obama, who also opposed the war, we have never had an explanation for why he was willing to allow Saddam to kill hundreds of thousands of people, except that perhaps he was doing what Reverend Jeremiah Wright told him to do. ( “18-Jun-14 World View — Generational Dynamics historical analysis of the violence in Iraq”)

Most of the world believed that Saddam had WMDs and was going to use them (again), and that undoubtedly includes the leaders in Iran, who were targeted by Saddam’s chemical weapons in 1988.

I have been saying for years that if it had not been for the 2003 Iraq war, then Iran would have pursued its own WMD program with much more vigor.

Western intelligence agencies believe that it was just after the 2003 Iraq war that Supreme Leader Seyed Ali Khamenei halted research into nuclear weapons, and issued the October 2003 fatwa to that effect.

Hashemi Rafsanjani’s interview does not mention the 2003 Iraq war or the fatwa, but his description of over 20 years of nuclear development as of 2003 provides strong support for the belief that Iran would pursued WMDs more vigorously than ever, and Khamenei certainly would not have issued his nuclear fatwa in October 2003.

It is highly probable that if the Iraq war had not been fought, then Iran and Iraq would have begun a WMD development war. Saudi Arabia would have followed suit, and we would have many Mideast countries with WMDs today. It is quite possible that the Bush administration foresaw this scenario, and it was one of the reasons why the 2003 Iraq war was pursued. Politico (22-Jun-2015)

Rafsanjani and Khamenei publicly disagree on the nuclear deal

Iran’s Supreme Leader Ayatollah Seyed Ali Khamenei has frequently expressed hostility to the nuclear agreement, and he seems to have become even more hostile ever since the agreement was signed.

Last week, Khamenei sent a letter to Iran’s president Hassan Rouhani, ordering him not to implement the terms of the nuclear agreement unless a number of brand new conditions were attached. There were nine new conditions, including the following: All sanctions must immediately be not just suspended but canceled, and may not be reinstated even if Iran breaks the agreement; many of Iran’s requirements, such as shipping out most of the country’s stockpile of enriched uranium, or to “renovate” the Arak nuclear reactor, will be postponed indefinitely; Iran’s ability to enrich uranium will be expanded.

Eighty to 90 percent of the people agree to the process of the JCPOA, and want to get out [of the nuclear dossier]. ‘The concerned’ [i.e. the ideological camp] know this. The Majlis sessions that preceded the vote [on the Majlis plan on the JCPOA] cost ‘the concerned’ dearly… because they affiliate themselves, in a way, with the leader [Khamenei] and it is as if they are expressing the leader’s view. The leader has a tongue, and, more than anyone else, is capable of speaking [his own mind]. He could have prevented them [from speaking], and there was no need for the feud and the arguments [in the Majlis]. It is very bad that they behaved like this in the Majlis. But this is the method of the leader [Khamenei], who lets others speak their minds. It would not have been bad if [the ideological camp] had acted morally and in accordance with national interests.

Rafsanjani appears to be laying the ground work for a rebellion against Khamenei, and from the point of view of Generational Dynamics, this would not be surprised.

Recall that Iran is in a generational Awakening era, one generation past the Great Islamic Revolution and the Iran/Iraq war. Just like America’s Awakening era in the 1960s, the era politically pits the generations of war survivors against the generation that grew up after the war. Rafsanjani is in the same generation as Khamenei, and yet Rafsanjani is often referred to as a “moderate,” because he adopts the positions of the younger generations, and sometimes opposes the hardline positions of other Great Revolution survivors. Memri (22-Oct) and Jerusalem Post and Memri