Germany may deploy 1200 soldiers to Syria to fight ISIS 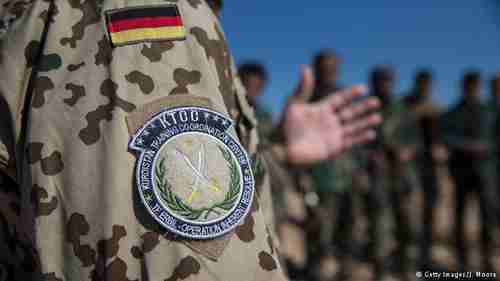 Germany’s cabinet voted on Tuesday to recommend sending military support to Syria to fight ISIS. The support would include 1,200 soldiers, along with Tornado reconnaissance aircraft and the naval frigate Sachsen.

Four to six Tornado jets would be stationed at two locations. Talks are underway with Jordan and Turkey about using the airbases in Incirlik and Amman. The frigate would be assigned to help protect the French flagship Charles de Gaulle aircraft carrier in the Mediterranean, from where fighter jets carry out bombing runs.

Many Germans are wary of external troop deployments, after the Nazi experience in World War II.

According to a YouGov poll, 71% of Germans fear a terror backlash due to Germany supporting France in its military campaign against ISIS.

Dietmar Bartsch, chairman of the Left party, expressed skepticism that there was a military solution to the conflict:

We have to impede ISIS, but that means, for example, through financial means, through the flow of weapons. We must put an end to the smuggling of oil in this area. We can’t defeat ISIS with bombs. […]

I don’t understand why the federal government, why other countries, have learned nothing from Afghanistan.

A final vote by the Parliament is scheduled for Wednesday.

Until now, Germany’s biggest foreign mission has been in Afghanistan, but that has gradually wound down to a force of just under 1,000. Last week, Germany agreed to send 650 soldiers to Mali, to join 1,500 French troops deployed to fight IS militants. Deutsche-Welle and BBC and DPA and Sky News

In major new escalation, US special forces will conduct combat in Iraq and Syria

Secretary of Defense Ash Carter announced on Tuesday that the US military will be sending an unspecified number of special forces troops to Iraq and Syria, beyond the 3800 that have already been sent, and that they will for the first time be conducting combat operations against the so-called Islamic State (IS or ISIS or ISIL or Daesh):

Next, in full coordination with the Government of Iraq, we’re deploying a specialized expeditionary targeting force to assist Iraqi and Kurdish Peshmerga forces and to put even more pressure on ISIL. These special operators will over time be able to conduct raids, free hostages, gather intelligence, and capture ISIL leaders.

This is the second major troop escalation by the Obama administration in a month. On October 30, the White House announced that, for the first time, special forces troops would be on the ground in Syria, as well as Iraq. At that time, press secretary Josh Earnest said:

The President does expect that they can have an impact in intensifying our strategy for building the capacity of local forces inside of Syria for taking the fight on the ground to ISIL in their own country. That has been the core element of the military component of our strategy from the beginning: building the capacity of local forces on the ground.

Blah, blah, blah. Earnest also said that “These forces do not have a combat mission.” Well, with Tuesday’s announcement, now they do.

According to analyst Michael O’Hanlon at the liberal Brookings Institution, commenting on the 10/30 announcement:

Clearly, our Syria strategy has been failing for four years. The renewed tensions in U.S.-Turkey collaboration, the lack of progress in establishing a safe zone in the north and working together with the Kurds, and now the Russian intervention have underscored how much of a dilemma we face.

So while some of us have viewed the situation in Syria as very serious for a long time, it is increasingly hard for the administration even to attempt to argue otherwise.

But I want the American people to understand how this effort will be different from the wars in Iraq and Afghanistan. It will not involve American combat troops fighting on foreign soil. This counterterrorism campaign will be waged through a steady, relentless effort to take out ISIL wherever they exist, using our air power and our support for partner forces on the ground. This strategy of taking out terrorists who threaten us, while supporting partners on the front lines, is one that we have successfully pursued in Yemen and Somalia for years. And it is consistent with the approach I outlined earlier this year: to use force against anyone who threatens America’s core interests, but to mobilize partners wherever possible to address broader challenges to international order.

This is what happens over and over. A president starts out with “advisors” or “special forces,” and ends up in a war.

On Tuesday, President Obama was speaking at the “climate change” conference in Paris, making his self-delusional statement that climate change is the cause of terrorism. A couple of commentators pointed out that President Obama seemed to be very “sad” and “depressed” as he was speaking. Why was he depressed? Possibly because every foreign policy initiative he has tried has been a disaster, and now he has “boots on the ground” in both Iraq and Syria, proving that his contempt for President Bush and for Boomers was also self-delusion. Rudaw (Iraq) and CNN (10/30) and NBC News (10/31)