Christmas won’t be coming to the tiny oil-rich nation of Brunei this year. It has been officially banned by government edict. Muslims seen indulging in traditional Christmas festivities and non-Muslims found to be organising events in the south-east Asian island state face up to five years jail under new laws first unveiled last December.

There is some relief for the country’s non-Muslims, who comprise 32 per cent of the 420,000 population; they can enjoy Christmas in their own communities on the condition that the celebrations are not disclosed to Muslims and no festive Santa Claus hats are worn in public or seasonal greeting cards are sent. 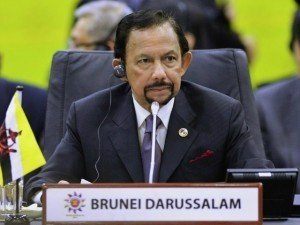 Imams informed followers of the news following a government edict banning celebrations, as directed by leader Sultan Hassanal Bolkiahhat (pictured right). He says they could lead Muslims astray and damage their faith, according to the Borneo Bulletin.

“These enforcement measures are … intended to control the act of celebrating Christmas excessively and openly, which could damage the aqidah (beliefs) of the Muslim community,” the Ministry of Religious Affairs ruled in an edict published by the newspaper.

The statement said non-Muslims disclosing or displaying Christmas celebrations violated the penal code which prohibits propagating religion other than Islam to a Muslim.

“Some may think that it is a frivolous matter and should not be brought up as an issue,” the imams are quoted as saying. “But as Muslims … we must keep it (following other religions’ celebrations) away as it could affect our Islamic faith.”

The former British colony, which gained independence in 1984,  sparked international outcry last April when it became the first south-east Asian nation to adopt Islamic law at a national level, raising fears that other nearby countries with a significant Muslim population such as Indonesia or Malaysia might be tempted to follow Brunei’s lead as the region becomes increasingly conservative, according to Reuters.

The law, rolled out in phases, will apply to both Muslims and non-Muslims in the country. This year’s banning of Christmas is an extension of the government’s desire to have Brunei cleansed of all non-Islamic influences.

Whipping and amputations as punishment for theft and alcohol consumption by Muslims took effect in April this year, and the final phase of death penalties, including stoning, will be introduced next year for offences including adultery, sodomy and insulting the Koran or Muhammad.

Sultan Bolkiah has driven the imposition of Sharia, saying it would be implemented in three tranches, culminating in 2016, thus making Brunei the first and only country in the region to introduce Sharia law into its penal code.

As Breitbart News reported, this has prompted boycotts and protests at hotels he owns in the United Kingdom and the United States, including the Beverly Hills Hotel.