Armenia vs Azerbaijan conflict in Nagorno-Karabakh worst in two decades 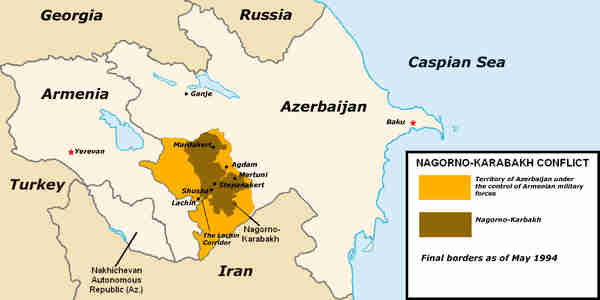 Nagorno-Karabakh borders as of May 1994. They’ve been frozen since then. (ADST)

Centuries old conflicts between Orthodox (Armenian Apostolic) Christians in Armenia and (mostly Shia) Muslims in Azerbaijan boiled over into a bloody war after the Soviet Union collapsed in 1991. By the time that the war ended in a cease-fire in 1994, the Armenians had annexed several Azerbaijani regions, and were in control of an enclave right in the middle of Azerbaijan called Nagorno-Karabakh (NKB). Although both populations had lived in relative peace for decades, more than 600,000 ethnic Azeris and 300,000 ethnic Armenians were forced to flee from the fighting, so that today the enclave has a population of about 100,000 Armenians.

Karabakh is a word of Turkic and Persian origin meaning “black garden”, while “Nagorno” is a Russian word meaning “mountain.”

Fears that the low-level conflict might spiral into a larger war were realized on Saturday when the worst violence since 1994 broke out in NBK with tanks, heavy artillery and helicopters for the first time in two decades. 18 Armenian soldiers were killed, and Azerbaijan lost 12 soldiers. There were unconfirmed reports of civilian deaths.

Internationally, NKB is considered part of Azerbaijan’s sovereign territory, but its Armenian inhabitants call themselves citizens of the Artsakh Republic. The territory has its own flag, an international airport, police and armed forces, although regular Armenian soldiers serve on the frontline.

Each side said that the other had started the conflict on Saturday.

There is a peculiarity about this situation that is either a coincidence or a conspiracy – take your pick.

Armenia’s president Serzh Sargsyan and Azerbaijan’s president Ilham Aliyev each met separately with US vice president Joe Biden as they attended the nuclear summit in Washington on Friday, just before the new hostilities broke out.

Matthew Bryza, the former US ambassador to Azerbaijan, speaking on the BBC, recalled what happened in 2008, when the world was focused on the 2008 Beijing Olympics. Bryza says that he’s always suspected that Russia’s president (then prime minister) Vladimir Putin took advantage of the 2008 Beijing Olympics to start a war in Georgia by firing at Georgian forces from behind the South Ossetian separatist peacekeepers, resulting in full-scale war after Georgia responded.

Bryza says that this “smells like” the same thing — Putin snubbed President Obama’s invitation to attend this Washington summit. Then the two leaders of Armenia and Azerbaijan meet with Biden, and at that very moment, the violence reaches an unprecedented new level. Bryza says that Putin is very much engaged in the situation, while Obama is ignoring it. Bryza says that this “conspiracy thinking” could be way off, but the US has to become actively engaged. If not, Russia will completely dominate the region. BBC and AFP and AP and The Association for Diplomatic Studies and Training (ADST)

Russian analysis: Armenia-Azerbaijan conflict could spread throughout the region

Armenia and Azerbaijan are two of the most militarized countries in the world. The main supplier of weaponry to both countries has been Russia. Furthermore, both countries have some of the world’s most sophisticated high tech military equipment. The widespread fear of escalation of the violence in Nagorno-Karabakh (NKB) is because both sides possess such high tech military equipment from Russia.

Russia is theoretically neutral between the two countries, but if that was ever true, it certainly stopped being true after Turkey shot down a Russian warplane last year, causing a major fault line to open between the two countries. Armenia is a long-time ally of Russia, and Russia has a military base in Armenia. Azerbaijan is ethnically Turkic, and has very close relations with Turkey. Azerbaijan has military treaties with Turkey. Azerbaijani and Turkish Armed Forces regularly conduct joint military exercises, and two are planned in 2016. ( “21-Jan-16 World View — Azerbaijan forced to choose between Russia and Turkey”)

An analysis by Alexander Khramchikhin, deputy director of the Institute of Political and Military Analysis in Moscow, divides the four countries into the “senior comrades” — Russia and Turkey — and the “junior allies” — Armenia and Azerbaijan. He says that Russia is in a “delicate position” because it sold weapons to Azerbaijan, as well as to Armenia, “our closest ally in the CSTO,” the Russian-led Collective Security Treaty Organization (CSTO).

In this regard, a new war between Armenia and Azerbaijan can very easily escalate into armed conflict between the “senior comrades” – Russia and Turkey. Besides that, there is also a significant probability of direct military clashes over Syria.

The peculiarity of the situation is that the “senior” allies do not abut with their “younger” allies, but border on the “junior” enemies: Russia with Azerbaijan, and Turkey with Armenia. And there is not a zero probability that military hardware that we sold to Azerbaijan will be used to fight not only against our closest ally, but also against the Russian army.

If Russia and Turkey start a war that will involve and Armenia, in Azerbaijan there is a strong temptation to attack from the north of Karabakh, using the fact that the Armenian Armed Forces are fully engaged on the Turkish front. However, in this case, Azerbaijan itself has a chance to blow from the north of Russia. Moreover, there is a substantial likelihood that Iran will not only sympathize with the Russian-Armenian coalition and directly fight on her side. Then Azerbaijan will get even with Iran, which will make a battle not just to win, but for survival.”

Saturday already saw the greatest outbreak of military hostilities since 1994. A further escalation of the conflict could destabilize the entire Mideast, and could also destabilize in the entire South and North Caucasus regions, at a time when Russia already has its hands full in Ukraine and Syria.

Russia may consider the option of deploying Russian troops or CSTO peacekeepers in Armenia proper along the border with Azerbaijan, in order to attempt to stabilize the situation. Jamestown and Voenno-Promyshlennyi Kurier (Moscow, 16-Mar, Trans) and Russia Direct (Moscow)

Another major crisis is developing rapidly: Greece will be sending migrants back to Turkey starting on Monday, and it’s widely believed that Turkey is not ready. Furthermore, many people in Turkey are opposed to receiving the migrants back from Europe. The first group of 750 refugees are scheduled to be returned to Turkey at the beginning of the week. International Business Times and Kathimerini