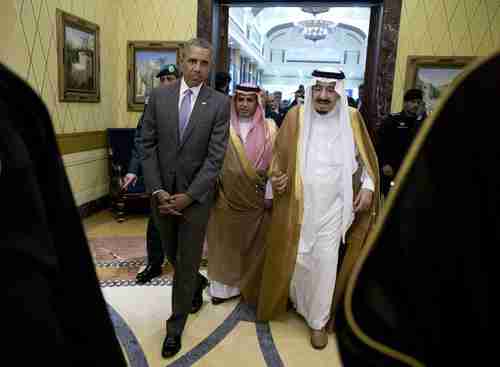 In May of last year, President Obama invited the leaders of the Arab nations in the Gulf Cooperation Council (GCC) to a meeting at Camp David. Saudi Arabia’s King Salman bin Abdulaziz al Saud snubbed Obama by not attending the meeting. ( “15-May-15 World View — Obama repudiates the Carter doctrine at bizarre GCC meeting”)

Now King Salman has snubbed Obama once again, this time in an even more embarrassing manner, as Obama arrived in Riyadh on Wednesday on Air Force One. King Salman was not there to greet him. Instead, a lower-level official greeted him. Saudi state television did not show Obama’s arrival live, but did provide live coverage of the arrival of other Gulf nation leaders — being greeted by King Salman.

Last year, Obama referred to Saudi Arabia as a “so-called ally,” because of its opposition to the Iran nuclear deal. Recently, the Saudis were deeply offended when Obama characterized some of his allies as “free riders.” ( “15-Mar-16 World View — Saudi’s Prince Faisal sharply rebukes Obama’s ‘free riders’ accusation”)

No one should be surprised at all that the Saudis have snubbed and embarrassed Obama twice in two years. Washington Times and CNN

President Obama to ‘clean up leftover messes’ in the Mideast

According to a WSJ article that I quoted in July of last year, Obama saw the deal with Iran as a kind of “gateway” to solve all the problems in the Mideast:

The White House is crafting a Middle East strategy for the remaining 18 months of President Barack Obama’s term that would more forcefully address conflicts in Iraq, Yemen and Syria amid tensions over the conclusion of talks with Iran. […]

[S]enior administration officials said the president is intent on cleaning up leftover messes in the region before leaving office in 2017, including relations with key allies that have been strained by the Iran talks.

And this is no joke. Just last week, US Secretary of State John Kerry was in Kabul, Afghanistan, lecturing government leaders how to run their governments. That was just a couple of days before the massive terrorist explosion in Kabul. ( “12-Apr-16 World View — Troubles mount for Afghanistan government as US withdrawal looms”)

So President Obama has been in office for 7-1/2 years, and he apparently believes that he has been so skillful in governing America that he now feels qualified to lecture leaders of any country in the world on what they are doing wrong.

According to reports, that is what he did on Wednesday in his meetings with King Salman in Saudi Arabia. Reports indicate that Obama raised the following issues:

People always criticize me when I criticize Obama, but if these reports are true, then this is about the dumbest thing I’ve every seen.

The Saudis see Iran as an existential threat. As we have been pointing out for two years, analysts note that the Saudis feel surrounded by the “Shia Crescent,” with Iran dominating control of four capitals — Tehran, Iran; Damascus, Syria; Beirut, Lebanon (thanks to the Iran-sponsored terror group Hezbollah); and Sanaa, Yemen. A fifth under partial control is Baghdad, Iraq. Telling the Saudis to “share the neighborhood” with Iran is absurd and offensive.

From the point of view of the Saudis, every one of Obama’s “suggestions” makes the situation much worse. The nuclear deal with Iran has removed sanctions and given Iran hundreds of billions of dollars more to use in sponsoring wars and terrorist acts. Exiting the war in Yemen would give complete control to the Iran-supported Houthis. Apparently, Obama has no grasp of any of this, as shown by the fact that the Saudi king has repeatedly snubbed Obama.

Obama supposedly believes that this trip will soothe Saudi-US relations, but it will probably only make relations worse. The Arab world is furious at Obama. Obama’s “free riders” statement alone sparked hundreds of scathing articles against him in the Gulf press. Well, we’ll be watching to see which country and which leader Obama will be lecturing to next.

However, from the point of view of Generational Dynamics, this growing US-Saudi estrangement is exactly consistent with what Generational Dynamics has been predicting for years, as I explained in detail in “15-Jul-15 World View — Arab views of Iran nuclear deal”: In the coming Clash of Civilizations world war, the US, India, Russia and Iran would be allies opposing China, Pakistan, Saudi Arabia, and the Sunni Muslim countries. BBC and Washington Post and Bloomberg and Memri