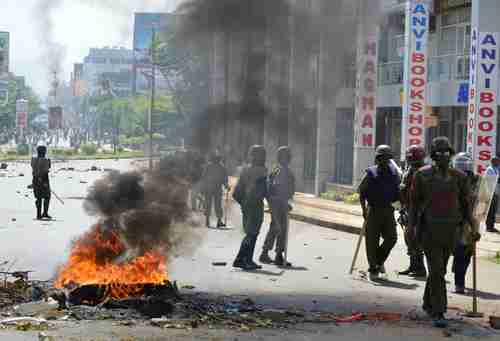 In Kisumu, Kenya’s third largest city, police opened fire on demonstrators on Monday, killing at least two. Another 61 people were injured in the clashes, 20 of whom were hospitalized with wounds from bullets or sharp objects. One of the wounded was a five-year-old child.

Police then used tear gas and water cannons to quell the protests as news of the deaths spread. Word of the shootings fueled heavy clashes in the center of Kisumu. There were widespread scenes of looting and two supermarkets were destroyed.

Protests have been occurring across the country since early April. Clashes with police have been increasing, but Monday’s violence in Kisumu was the worst so far. Kisumu, a port city in western Kenya on Lake Victoria, is considered a hotbed of anti-government protests.

The protests are related to the presidential election scheduled for next year. After the election in December 2007, the entire country suffered from tribal violence that killed 1200 people and forced 600,000 from their homes. (Jan 2008: “Post-election massacre in Kenya raises concerns of tribal war”) The ethnic violence was started, according to many sources, by youthful activists in the Orange Democratic Movement (ODM), an anti-government Luo ally supporting Odinga for President. The worst known atrocity occurred when 30 people died in a church fire. Dozens of people had gone to the church to escape increasing violence, when a youthful gang set the church on fire, trapping people inside. This atrocity drew international attention.

There are many tribes in Kenya, including the Luo, Luhya, Kalenjin, Kisii of western Kenya, and the Kikuyu, Embu and Meru (GEMA) people from the Mount Kenya area.

The two most prominent tribes are the market-dominant Kikuyu tribe and the disadvantaged Luo tribe. In the last three elections, the two leading candidates were Kikuyu and Luo, respectively, and the Kikuyu candidate always won. The violence after the 2007 election was triggered because of widespread accusations that the Kikuyu government had rigged the election, to score a new victory.

The same issue is propelling the new rounds of protests and violence. The current president is Uhuru Kenyatta, a Kikuyu, and his principal challenger is Raila Odinga, a Luo.

The Kenyatta government has created an Independent Electoral and Boundaries Commission (IEBC), whose job it is to define the rules and procedures for next year’s election. The opposition, led by Odinga, has formed the Coalition for Reform and Democracy (CORD), which is conducting the nationwide protests that triggered Monday’s violence. CORD is accusing the IEBC of rigging the election so that Kenyatta will win again next year.

The protests are becoming increasingly violent. The concerns are that the violence will continue to increase, and there will a new round of widespread violence, no matter who wins next year’s election. Coast Week (Kenya) and The Star (Kenya) and Al Jazeera and AFP

What’s happening in Kenya is a pattern that I’ve described many times when a generational crisis war is an internal civil war.

Among generational crisis wars, an external war is fundamentally different than an internal civil war between two ethnic groups. If two ethnic groups have lived together in peace for decades, have intermarried and worked together, and if then there’s a civil war where one of these ethnic groups tortures, massacres and slaughters their next-door neighbors in the other ethnic group, then the outcome will be fundamentally different than if the same torture and slaughter had been rendered by an external group. In either case, the country will spend the Recovery Era immediately following the war setting up rules and institutions designed to prevent any such war from occurring again. But in one case, the country will be unified in the decades to follow, while in the other case, the country will be increasingly torn along the same ethnic fault line.

Kenya’s last crisis war was the “Mau-Mau Rebellion.” Britain had been exerting a fairly heavy hand as a colonial power, starting from the 1850s. An independence movement began in earnest in the late 1940s, leading to the rebellion that began in 1952 and climaxed in 1956. In the Recovery Era that followed, Kenya finally gained independence in 1964. As population increased over the decades, the Luos, with traditional lifestyles as fishermen, had land conflicts with the Kikuyus and were marginalized.

When I wrote about the violence in 2007-8, I wrote that it was POSSIBLE but UNLIKELY that the violence would spiral into a full-scale civil war at that time. The reason is that the previous crisis war, the Mau-Mau Rebellion, had climaxed in 1956, only 52 years earlier. After 52 years, there would still be many survivors of the Mau-Mau Rebellion with personal memories of the war. They may have been only children at the time of the rebellion, but they would have had experiences that scarred them for life, and they would do everything possible to prevent anything like that from happening again. So in 2008, there would still have been enough of these survivors in senior positions to prevent the violence, as bad as it was, from spiraling into a full-scale civil war. This analysis turned out to be completely correct in 2008, as the violence fizzled within a few weeks. (Feb 2008: “Kenya settles into low-level violence on the way to Rwanda”)

As I explained at that time, historical research and analysis had shown that a new crisis war starts to become increasingly likely at a point 58 years past the climax of the preceding crisis war. That seems to be the time when the survivors of the preceding crisis war lose their ability to prevent a new one. This is because children younger than five would not have any personal memory of a crisis war, and the children five years old and older become 63 year old and older after 58 years have passed.

Many Kenyans believe that nothing has changed and that any new violence that breaks out after next year’s election will not be any worse than the 2008 violence. But that’s not true, because there have been major changes since then. Eight more years have passed since the 2008 violence, and it is now 60 years past the climax of the preceding crisis war. This means that the survivors of the Mau-Mau Rebellion have almost completely disappeared, and will no longer be able to exert enough influence to prevent a major new civil war. This means that a new civil way is not CERTAIN, but it’s far more LIKELY than it was in 2008. The Nation (Nairobi) and Open Democracy 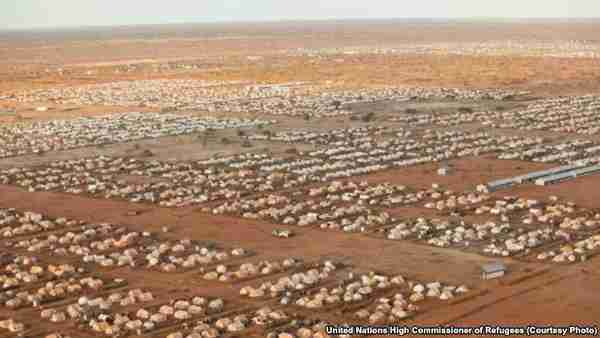 Kenya has announced that it will close the Dadaab refugee camp later this year, and require the residents to return to their home country, which is almost always Somalia.

Kenya is the world’s largest refugee camp, home to 350,000 people. It was opened in 1991, at a time when people in Somalia were fleeing civil war, lawlessness and recurrent droughts. (Recall that 1993 was the year of the famous “Black Hawk Down” incident, where Somali militia fighters shot down two American helicopters using rocket-propelled grenades. Mobs then hacked the fallen pilots to death with machetes and dragged their mutilated bodies through the streets as trophies.)

At its peak in 2012, the Dadaab refugee camp housed nearly a half-million people. Many children had been born there and grown to adulthood without ever leaving the camp. Since then, some Somalis have left the camp and returned home voluntarily.

Kenya has given two reasons for closing the camp. One reason is the enormous expense of supporting hundreds of thousands of refugees, with little or none of the financial support promised by the EU or the US having actually been provided. And second, it is believed that Somalia’s terror group, al-Shabaab, is using the camp as a base to launch terror attacks on Kenya. (See “3-Apr-2015 World View — Al-Shabaab kills 147 mostly Christian students in Kenya school” and “23-Sep-2013 World View — Minnesota link to Kenya shopping mall attack raises U.S. fears”)

Human rights organizations are taking action to prevent Kenya from closing the camp. There’s little doubt that forcing 350,000 people to leave their homes and move somewhere else is the stuff of historical genocides, and closing the camp will not be smooth in the best of circumstances. Anadolu (Turkey) and AFP and VOA