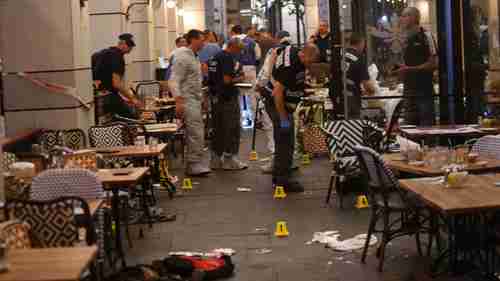 Police at scene of Wednesday’s attack in Tel Aviv (Haaretz)

Many times in the past, jihadists have scheduled terror attacks for the beginning of Ramadan, and that may be the reason for the three Mideast terror attacks in the last two days, one in Tel Aviv and two in Turkey.

The attack was apparently well-planned. Since the price of firearms in the Palestinian territories is prohibitively high, both of the gunmen in Wednesday night’s attack apparently used improvised firearms: an imitation of the Swedish-made Carl Gustav recoilless rifle, which was used primarily in the 1950s and ’60s, and which is known on the Palestinian street as the Carlo. This has been the weapon of choice of Palestinian assailants in the recent spate of terror attacks.

We gathered to discuss a number of steps, both defensive and offensive, that we will take in order to act against this very severe phenomenon of shooting attacks. It definitely poses a challenge to us, but we will respond…

We are at the peak of a difficult period. We will act with resoluteness and with intelligence.

A couple of months ago, there was a spate of knifing attacks on Israelis by Palestinians. Those knifing attacks have all but ended, and Netanyahu’s caution may have been from a desire not to further inflame relations. Wednesday’s attack was the first major terror attack in several weeks. Haaretz (Israel) and Jerusalem Post

I’ve reported on three or four occasions in the last couple of years that some Palestinians have called on the West Bank Palestinian Authority (PA) and Palestine Liberation Organization (PLO) to end all security cooperation with Israel, forcing Israeli security forces to take responsibility for policing the entire West Bank, rather than sharing that burden.

On May 4, the PLO Executive Committee announced that it decided “to immediately begin implementing the Palestinian Central Council’s decisions regarding limiting the political, economic and security relations with the occupation authorities [i.e., Israel],” and this due to “Israel’s disregard of signed agreements and its insistence on destroying the two-state solution.” The decision was motivated by Israel’s rejection in April of the French initiative for convening an international conference on the Palestinian-Israeli conflict.

However, the decision has sparked a great deal of criticism among Palestinian leaders, and no steps have been taken to implement it.

The decision taken by the Palestinian Central Council in its latest session [on March 2015], namely that relations with Israel must be severed, was an emotional decision, since most of the Central Council members came from abroad, from Chile, Romania, Australia, America and other countries, and their view of the Palestinian issue is more emotional than it is practical and realistic – unlike [the view taken by] us, the members [who live] inside Palestine…

[I maintain that] we kid ourselves when we say we are able to boycott Israel or sever our relations with it, especially in the two domains of security and economy, which are fundamental to the lives of the Palestinian people and the residents of the occupied West Bank… [If we sever these relations] how can we bring fuel and flour [into our territories] and how can we keep the power running, etc.? Israel controls us on land, in the sea and in the air. If we decided, hypothetically, to sever our economic relations with Israel and cancel the Paris Protocol on economic [relations], could we actually live without them? That is the question we must put to those who demand day and night to end the economic and security coordination and to sever the relations with Israel…

There were two major terror attacks in Turkey this week, one on Tuesday and one on Wednesday. It is thought that the attacks, along with the attack in Tel Aviv, were scheduled to coincide with the start of Ramadan.

On Tuesday in Istanbul, a car bomb was detonated around 8:35 am just as a police bus was passing near a policy station. The bomb killed 11 people, six of whom were police officers, while wounding 36 others. Seven people have been arrested, including the four that rented the car.

Turkish officials say that Tuesday’s suicide bomber was a Syrian refugee that had come to Turkey, and that the refugee had links to ISIS. Police are investigating other connections to ISIS.

On Wednesday at 11 am, a car bomb attack targeted police headquarters in Turkey’s southeastern province of Mardin, killing five people, including two police officers, and wounding around 30. In this case, Turkish officials say that they’ve identified they’ve identified the perpetrators as terrorists from the PKK.

Southeastern Turkey is a stronghold of ethnic Kurds in Turkey, and terror attacks occur regularly, leading police to take extra precautions. Authorities say that Wednesday’s attack would have had a much higher death toll, but that was prevented by safety measures and barricades already in place. Hurriyet (Ankara) and Hurriyet

In a way, the two terror bombings in two days in Turkey strengthens Turkey’s hand in the continuing negotiations over the EU-Turkey refugee deal. After all, if one of the bombings was perpetrated by an ISIS-linked Syrian refugee, then Europe will be all the more desperate to keep out unvetted Syrian refugees.

So far the EU-Turkey deal has been incredibly successful according to what the EU wanted to accomplish. In 2015, 800,000 refugees crossed the Aegean Sea from Turkey to Greece, and there were thousands of drownings. But 5,000 have crossed the Aegean Sea in the last two months, and there were no refugee drownings. So Turkey has been meeting its obligations under the deal.

But if Turkey has been meeting its obligations, the EU has not:

The EU is also demanding that Turkey liberalize its anti-terrorism laws, especially those targeting ordinary Kurdish citizens. The two terror bombings will strengthen Turkey’s claims that it is not possible to liberalize the laws.

We are now well into June, and there has been little public discussion of the EU-Turkey deal in the past few weeks. My guess is that European and Turkish officials have tacitly agreed not to discuss this issue until after Britain’s June 23 “Brexit” referendum – whether Britain should leave the European Union – in order not to inflame the immigration issue further in the Brexit campaigns.

If that is true, then the last week of June is going to be a period of crisis negotiations between the EU and Turkey, no matter how the Brexit vote turns out. Daily Sabah (Ankara) and Washington Times and Foreign Policy