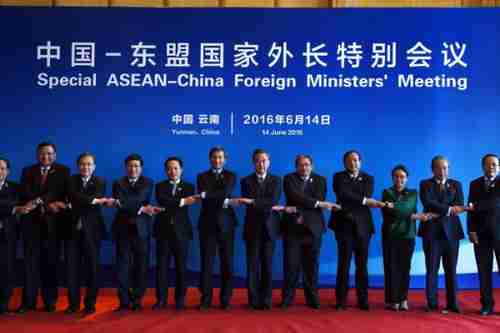 Foreign ministers at the meeting of the Association of Southeast Asian Nations (ASEAN), issued a statement on Tuesday criticizing China’s actions in the South China Sea, though without directly naming China:

We expressed our serious concerns over recent and ongoing developments, which have eroded trust and confidence, increased tensions and which may have the potential to undermine peace, security and stability in the South China Sea. […]

We emphasized the importance of non-militarization and self-restraint in the conduct of all activities, including land reclamation, which may raise tensions in the South China Sea.

We stressed the importance of maintaining peace, security, stability, safety and freedom of navigation in and overflight above the South China Sea, in accordance with universally recognized principles of international law including the 1982 United Nations Convention on the Law of the Sea (UNCLOS).

Within hours, apparently under pressure from China, Malaysia’s foreign ministry announced that the ASEAN statement was being withdrawn:

We have to retract the media statement by the ASEAN foreign ministers… as there are urgent amendments to be made.

However, a day later, neither Malaysia nor any other ASEAN member has issued an updated statement, or explained what the “urgent amendments” are.

This is a major embarrassment for ASEAN. If they issue a new statement with the South China Sea language watered down or missing, then the media will say that ASEAN is a China puppet.

China has been following Hitler’s example by annexing regions of the South China Sea that have historically belonged to other countries, including the Philippines, Vietnam, Brunei, and Malaysia.

ASEAN has ten members: Brunei, Cambodia, Indonesia, Laos, Malaysia, Myanmar, the Philippines, Singapore, Thailand and Vietnam. Of these ten nations, Cambodia has been China’s most reliable ally. At a 2012 meeting of the 10-member Association of Southeast Asian Nations (ASEAN), Cambodia vetoed attempts to even discuss the South China Sea issues. That’s easy enough for Cambodia, since China is not confiscating any region belonging to Cambodia.

For a long time, Laos sided with Vietnam on the issue, but last month, Laos flip-flopped and sided with China. That’s also easy enough for Laos, for the same reason as Cambodia.

Singapore has been trying to act as a mediator between China and the other countries, but the withdrawal of the original ASEAN statement apparently has angered Singapore, as Singapore Foreign Minister Vivian Balakrishnan walked out of a press conference he was co-chairing with China’s foreign minister, Wang Yi.

Laos will be hosting the next ASEAN meeting in July, and fireworks are expected. The Star (Myanmar) and The Diplomat and AFP

U.S. Defense Secretary Ash Carter told a meeting at Nato headquarters in Brussels on Wednesday the Obama administration is reevaluating its previous plans to withdraw thousands of troops from Afghanistan by the end of 2016.

There are currently 9,800 American troops in Afghanistan. The plan was to reduce that level to 5,500 by the end of 2016, but now that plan is apparently about to be changed, much to the surprise of no one.

This new announcement comes just four days after another administration reversal. ( “11-Jun-16 World View — In a reversal, Obama allows US troops in Afghanistan in combat roles”)

Here’s what President Obama said in a speech in December 2009, just one week before he was scheduled to leave to accept his Nobel Peace Prize. He referred to a “review” of the situation in Afghanistan that his administrations had been conducting:

Obama was bitterly criticized by military analysts for setting an 18-month deadline, and of course the analysts were right and Obama was dead wrong. Obama has been forced to backtrack on his 18-month commitment multiple times, and Wednesday’s speech by Ash Carter indicates that the next flip-flop is about to occur.

When Obama took office in 2008, he had expected to be able to direct the American withdrawal from Iraq and then quickly win in Afghanistan. Those promises are in shambles, as are all Obama’s policies for Afghanistan and the Mideast. This is what happens when we elect a president with absolutely no clue what’s going on in the world, and it looks like it’s going to happen again. Washington Post and Washington Times