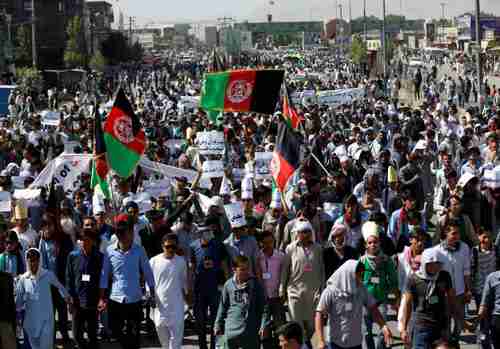 Thousands of Shia Hazara protesters in Kabul on Saturday, just prior to the attack (Reuters)

At least 80 people, mostly Shia Muslim Hazaras, were killed on Saturday in the worst terror attack in Kabul, the capital city of Afghanistan, since 2001. The venue was a rally by some 10,000 Shia Hazaras, protesting a government policy related to electricity. Afghanistan’s interior ministry issued a statement:

As a result of the attack 80 people were martyred and 231 others were wounded. The attack was carried out by three suicide bombers… The third attacker was gunned down by security forces.

Amaq News, the public relations agency of the so-called Islamic State (IS or ISIS or ISIL or Daesh), claimed that “ISIS fighters detonated explosive belts amidst a ‘gathering of Shi’ites’ in Deh Mazang in Kabul Afghanistan.” This needs to be confirmed, however, since ISIS has developed the policy of claiming credit for almost every criminal act in the world, whether they’ve had anything to do with it or not.

However, the credibility of the ISIS claim may be supported by the statement issued by the Afghan Taliban denying responsibility:

We wish to make clear that the Mujahideen of Islamic Emirate have no hand in this incident. At the same time we strongly condemn all acts of cynicism which seek to divide the nation into ethnic groups and sides and then pushed into war. Such incidents are carried out by enemies of the nation and is a deplorable step.

No doubt the Taliban issued this statement because they consider ISIS to be their enemy, and are themselves threatened by the rise of ISIS in Afghanistan.

But the statement is laughable nonetheless. The Afghan and Pakistan Taliban have killed thousands of Shia Hazaras in recent years. In fact, two branches of the Pakistani Taliban, Jundullah (Soldiers of God) and Jaish-ul-Adl (Army of Justice), have committed themselves to the extermination of all Shias, and have even conducted numerous terrorist acts on Iranian soil.

I promise you I will take revenge against the culprits. I have ordered the attorney-general to set up a commission to investigate this incident.

This statement is also laughable, as Ghani has promised revenge against perpetrators of terror acts in the past, to no avail. In this case he is promising to set up a new commission, which should reassure everyone. He is also banned public gatherings in Kabul for 15 days. Khaama Press (Kabul) and Financial Express (India) and The Diplomat

The Kabul attack targeted a protest march by around 10,000 Hazaras, protesting plans to develop a new power infrastructure that would provide electricity to Kabul and Pashtun provinces, but would bypass central regions that were home to the largest Hazara community. The Persian-speaking Hazara people, estimated to make up about 9% of Afghanistan’s population, are the country’s third-largest minority and claim to have been repressed throughout the country’s history. With Afghanistan in a generational Awakening era, this kind of protest, especially by young people, is to be expected.

Afghanistan’s last generational crisis war was the extremely bloody civil war fought between 1991 and 1996. The war was fought mainly between the Pashtuns in southern Afghanistan versus the Northern Alliance of Tajiks, Hazaras and Uzbeks in northern Afghanistan. Today’s Taliban terrorists are radicalized Pashtuns, and there is still plenty of visceral hatred between the two sides.

It is no coincidence that both the Taliban and ISIS are fighting against Shia Muslims. Just as the Shia Hazaras fought against the Sunni Muslim Pashtuns in the bloody 1990s civil war, Syria’s Shia/Alawites, led by Syrian president Bashar al-Assad, have been attempting to exterminate the Sunni Muslims in Syria. In Syria, al-Assad’s genocidal actions have drawn thousands of young Sunni Muslim jihadists from Indonesia to Pakistan to Algeria to Chechnya to go to Syria to fight the Shias and Alawites, and these international jihadists have formed the backbone of ISIS.

So, ISIS and the Taliban may be each other’s mortal enemies, but they’re united in wishing to exterminate Shia Muslims — al-Assad’s Shias in Syria and the Hazara Shia Muslims in Afghanistan. So, whether it was the Taliban or ISIS that perpetrated Saturday’s attack, it was not surprising that the Shia Hazaras were targeted.

The bigger picture is that we can see the growing conflict between Shia Muslims and Sunni Muslims in the Mideast. This is the trend line that I’ve been writing about for years, as predicted by Generational Dynamics. Furthermore, Hindus have been allied with Shia Muslims against Sunni Muslims in numerous bloody wars, starting with the seminal Battle of Karbala in 680, while the Mongols and Chinese have been bitter enemies of the Russians for centuries.

So it seems that every couple of days something happens to advance the world along the predicted trend lines — the US, India, Russia and Iran versus China, Pakistan, Saudi Arabia and the Sunni Muslim countries, with Afghanistan split between the Pashtuns and the Northern Alliance. Reuters (just before the attack) and Deutsche Welle and Saudi Gazette