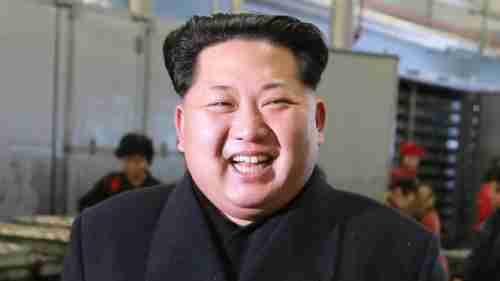 Reports indicate that North Korea’s Intelligence Agency is becoming concerned about the child dictator’s weight gain, which has grown from 198 pounds in 2012 to 286. Reports indicate that Kim Jong-un is consuming high-quality cheeses, Big Macs, vodka, steak, and sushi, and that he is suffering from gout, diabetes, high blood pressure, high uric acid, and high cholesterol.

Another South Korean report indicates that North Korean state television showed Kim Jong-un falling asleep at a meeting, apparently because he had been drunk the night before. There are widespread rumors in North Korea that Kim enjoys boozing until late into the night.

On Wednesday morning, North Korea launched two ballistic missiles. One missile exploded after launch. A second missile traveled 621 miles and landed in the Sea of Japan, 155 miles from Japan’s Oga Peninsula, and was on a straight line to strike a Japanese radar station in Shariki. The latest tests show that North Korea is capable of targeting many of South Korea’s areas, including harbors and airfields with nuclear missiles.

Going back to the beginning of this year, North Korea made its fourth nuclear bomb test on January 6, followed by a long-range missile test on February 7.

These tests were the triggers that convinced South Korea’s government, after years of equivocation, to finally approve the deployment of the Terminal High Altitude Area Defense (THAAD) in South Korea by the end of the year. ( “28-Jul-16 World View — China, Japan vociferously object to South Korea’s THAAD missile system deployment”)

North Korea vowed that it would have a “physical response” response to the THAAD announcement. So there was a missile launch on July 7, a submarine-launched missile test on July 8, though they couldn’t have been in reaction to the THAAD announcement, which came on July 8. There was another missile test on July 19. Wednesday’s test was the first to come close to actually threatening a target on Japanese soil. North Korea has also issued sharp denunciations of the United States decision to list North Korea’s child dictator Kim Jong-un under new sanctions.

North Korea issued a new statement on Wednesday reacting to THAAD: “If the monster known as THAAD comes to coil itself in the South’s territory, [the land] will transform itself into a nuclear arms race arena that brings in neighboring powers.”

According to Chinese state media:

The launch, already the third missile fired by the DPRK [North Korea] after Washington and Seoul announced their decision on July 8 to deploy a Terminal High Altitude Area Defense (THAAD) missile shield in South Korea, could easily be interpreted as a protest against the planned installation of the system.

It also serves a reminder to policymakers in Seoul that by allowing THAAD deployment, South Korea is putting the cart before the horse in their pursuit of national security, as the key to security lies in good neighborly and friendly relations with its neighbors, rather than a bunch of U.S.-made missiles.

However, that analysis doesn’t make sense, as there were missile tests before the THAAD announcement. It’s pretty clear that North Korea is going to continue with development of nuclear weapon and missile technology, irrespective anything that South Korea does. Dong-a Ilbo (Seoul) and The Diplomat and UPI and Xinhua