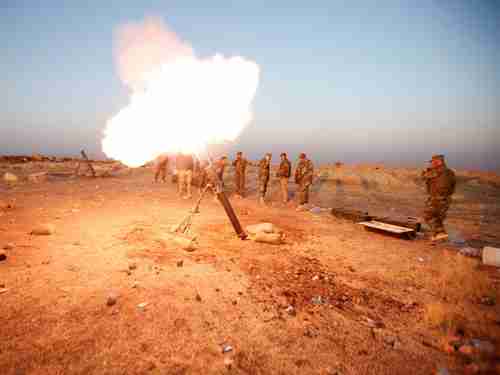 The Iran-backed Shia militias fighting in support of Iraq’s army to liberate Mosul from the so-called Islamic State (IS or ISIS or ISIL or Daesh), claim that they are on a mission by themselves to recapture the nearby town of Tal Afar.

The front that has been tasked to the Hashd al-Shaabi is one of the most significant and most dangerous fronts in this operation.

[The PMF] are tasked with one of the widest areas, ranging from Qayyara in the west, Tal Afar in the north to the Mosul outskirts in the east and some areas on the Syrian-Iraqi border to the west.”

Tal Afar is about 55 km (35 miles) northwest of Mosul, and al-Shaabi indicated that the goals was to cut off any option of retreat by ISIS into Syria, or to prevent any reinforcements from arriving from Syria.

As we have discussed previously, there has been a debate over whether to leave open the roads west of Mosul, so that ISIS fighters will take advantage of it and flee without a fight to ISIS headquarters in Raqqa in Syria.

The claims by Shia militia (PMF) spokesman Ahmad al-Asadi seems to support closing the corridor to the West.

On the other hand, the active involvement of Iran-backed Shia militias would seem to violate Iraqi government promises to Turkey that Shia forces would be limited in their activities, to prevent sectarian clashes.

But all of al-Asadi’s claims are being disputed by Turkey’s military, according to a report in Daily Sabah:

As reports from various sources indicate that Shiite militia groups have launched an operation Saturday to capture predominantly Turkmen town of Tal Afar in northern Iraq from Daesh, Turkish military sources said that these groups are not near the town and reports are part of a psychological warfare attempt.

The report suggests that the operation to recapture Mosul is not going as well as planned, and the claims that the PMF are about to capture Tal Afar are an attempt to fool both the international commit and ISIS.

This report is consistent with suggestions in other reports that the Iraqi army’s advance on Mosul is stalled, and that the Mosul offensive has virtually ground to a halt. AFP and Reuters and Daily Sabah (Ankara) and Debka

ISIS using tens of thousands of men, women and children as human shields in Mosul

According to the United Nations Human Rights office, ISIS has abducted tens of thousands of men, women and children from areas around Mosul and are using them as “human shields.” Describing it as “ISIS’s depraved, cowardly strategy,” they are being kept near military installations, to prevent the Iraqi army from advancing.

In addition, the UN is expressing “deep concern” at reports that some individuals in the areas south of Mosul have embarked on revenge killings and had vowed on television that there will be “eye for eye revenge” against those who sided with ISIS. United Nations and Hurriyet (Ankara)

Conflicts among ethnic groups lead to chaos in Mosul operation

Retired Army Gen. David H. Petraeus was once commander of the U.S.-led forces in Iraq, and he led the troop surge in 2007 that expelled Al-Qaeda in Iraq. So he completely understands the issues that the Iraqi army coalition is facing in its attempts to expel ISIS from Mosul.

According to Petraeus, the Mosul campaign is unfolding “in quite a methodical way,” and is a “textbook example” of such an operation. But he points out that the chaotic nature of the operation is caused by ethnic differences in both the Iraqi security forces and the millions of civilians being liberated:

The Iraqi security forces [are] this mix of Iraqi army, Iraqi police, Kurdish peshmerga, the Iraqi counter-terrorism service, the Iraqi air force, popular mobilization units — some Shia Arab from the south, some Sunni Arab from the tribes of Nineveh province. And the challenge is going to be, first of all, to keep all of them pulling in the same direction…

As we used to say when I was privileged to be the commander there, Nineveh province has the most diverse human terrain in all of Iraq – Sunni Arab majority to be sure, but also Shia Arabs, numerous Kurdish communities, and they are broken out into several different political parties.

There are Yazidis. There are Shabak. There are Christians. And there are Turkmen Shias, as well as Turkmen Sunnis, and this explains why President [Recep Tayyip] Erdogan of Turkey has been so vocal about the fact that the Turkish forces needed to be on the outskirts of Mosul should take some part in this effort.

The situation in the Mosul operation is even worse, according to Israeli analyst Anshel Pfeffer:

On the ground, however, totally separate battles are being fought out. The Iraqi Army, the Peshmerga, Shi’ite-Iraqi militias and United States Special Forces teams are all rival forces, albeit with a common enemy, for now. They are all fighting ISIS while pursuing very different agenda.

The Iraqi Army are not even allowed into the territory of the Kurdish Regional Government without special authorization, and the Peshmerga constantly complain of how almost all the new weapons supplied by the Americans have gone to Baghdad’s forces, with the Kurdish fighters receiving only scraps. …

“The Americans don’t learn,” says one Peshmerga officer. “The Iraqi army will just run away, leaving their new American weapons to ISIS. Just as they did two years ago.”