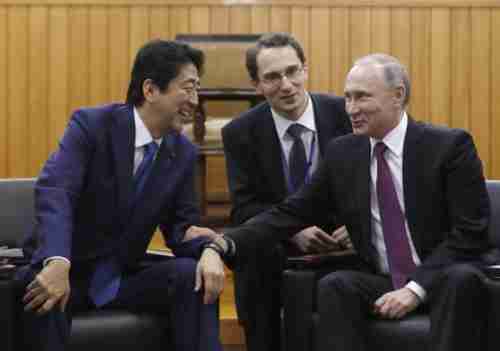 Shinzo Abe and Vladimir Putin at their meeting on Friday (AP)

Russia and Japan are technically still at war, having never signed a peace treaty ending their conflict in World War II. Japan has demanded the return of their Northern Territories, consisting of four islands that the Soviet Union forces seized at the end of the war. Russia calls them the Kuril Islands.

So when Russia’s president Vladimir Putin came to Tokyo for the last two days to visit with Japan’s president Shinzo Abe, a lot of people were hoping they’d reach an agreement on the disputed islands, and that they would sign an agreement ending World War II.

Unfortunately, no such agreement and no peace treaty were forthcoming. Press reports seem to imply that Abe had hoped to develop a personal relationship with Putin and perhaps charm him into reaching an agreement on the islands. As it turned out, even that goal might not have been reached, as the two leaders met only briefly. Afterwards, Putin said, “It would be naive to think we can solve this problem in an hour, but there is no doubt that we need to look for a solution.” Abe said, “We need to work toward a breakthrough so that we don’t disappoint the next generation.”

Instead, they signed economic deals whose net effect will be Japanese investments in projects in Russia. Russia and Japan will each put $500 million into a new fund that will make investments in Russia’s energy, urban planning and medical services. There were reports of agreements on joint Russian-Japanese economic activities on the islands, including fisheries, tourism, culture and medicine, but no talk of sovereignty.

Still, while Russian analysts are saying that Russia got the better of Japan in the summit, they hope that the joint economic activities will lead to an eventual peace treaty.

Russia achieved something else significant. Japan has supported the US-led economic sanctions on Russia for invading and annexing Ukraine’s Crimea peninsula, and Friday’s economic agreements seem to

One might well ask oneself why Japan seems so eager to suck up to Russia without seeming to get much in return. China has been increasingly hostile to Japan, while Russia and China appear to be getting along, even militarily, so perhaps Abe felt that a friendship with Russia would protect Japan from China in the future.

Generational Dynamics predicts that in the coming Clash of Civilizations world war, the US, Japan, India, Iran and Russia will be allied again China, Pakistan and the Sunni Muslim countries. Japan Times and Russia Today and Tass (Moscow)

South Korea has been embroiled for months in an explosive corruption scandal that has led the parliament to vote to impeach president Park Geun-hye, and has had massive anti-Park protests every week. Park’s fate will depend on a ruling by the Constitutional Court, which is expected early next year.

It is expected that there will be large crowds of protesters in Seoul on Saturday, calling for Park to resign from office without waiting for the Constitutional Court. It is feared that they will clash with another large group of protesters, this group supporting Park.

Ban Ki-moon is stepping down after being United Nations Secretary-General for ten years, and was asked whether he will run for president of South Korea:

I’ll go back to (South) Korea, then I’ll try to meet as many people as possible, which may include political leaders, leaders of civil society and my friends, and I will really consider seriously how best and what I should and could do for my country.

I can understand and share the anxiety of people about the future of their country. And this is one of the biggest challenges the Korean people are encountering.

I also understand the aspiration of people for a new type of inclusive leadership that can help them overcome the challenges ahead.

He sounds to me like a politician running for president. AP and Special Broadcasting Service (Australia) and JoongAng Ilbo (Seoul)