Emeritus Pope Benedict XVI, who turned 90 years old on Easter Sunday, gave a rare birthday speech inside the Vatican expressing his thanksgiving to God for the gift of life.

“There have also been trials and difficult times, but through it all He has always led me and pulled me through, so that I could continue on my path,” he said.

Prior to his election as Pope Benedict on April 19, 2005, Joseph Ratzinger enjoyed a brilliant career as university professor, bishop and author and has been acclaimed as one of the most eminent Catholic theologians of the late 20th century.

Saint John Paul II brought Ratzinger to Rome in November 1981 to serve as prefect of the Congregation for the Doctrine of the Faith, a role he held for more than 20 years until the death of Pope John Paul in 2005.

Although a gentle, soft-spoken man in person, Ratzinger proved a faithful caretaker of Catholic doctrine, and was especially tough on so-called “Liberation Theology,” which attempted to re-read salvation history through the prism of the Marxist ideology of class struggle between social classes.

Surrounded by friends and well-wishers from his native Bavaria on his birthday, Benedict said he was full of thanks in a special way for his “beautiful homeland,” adorned with “church towers, houses with balconies filled with flowers, and good people.”

Bavaria is beautiful, Benedict reminisced, “because God is known there and people know that He has created the world and that we do well to build it up together with Him.” 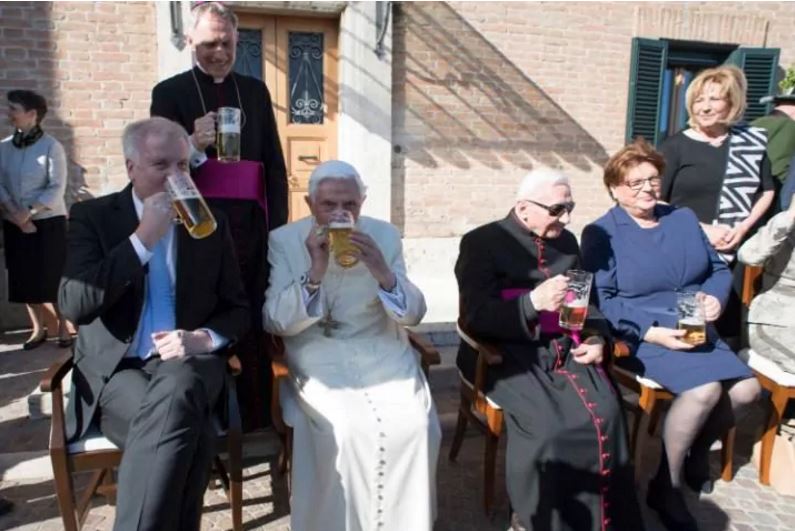 Pope Emeritus Benedict enjoys a beer on his 90th birthday.

“I am glad that we were able to gather together under the beautiful blue Roman sky,” he continued, “which with its white clouds also reminds us of the white and blue flag of Bavaria—it is always the same sky.”

“I wish you all God’s blessings,” he said. “Carry my greetings home, as well as my gratitude to you. How I enjoy to continue living and walking about amidst our landscapes in my heart.”