As we contemplate the fallout from CNN’s effort to hunt down and intimidate the creator of a ten-second comedy video, let us note that people have been jailed around the world for social media posts.

Here is what happens when governments and cyber-vigilantes start deciding that certain “hateful” individuals no longer deserve the privilege of online anonymity. Note well how elastic the definition of “hate speech” can become in the hands of authoritarians. 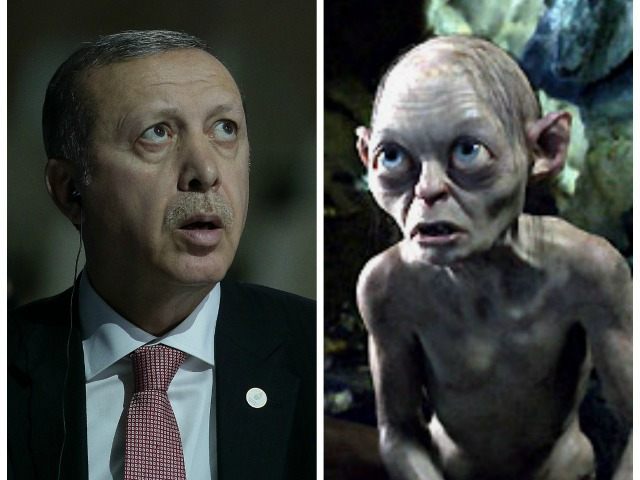 Turkish Doctor Notices President Erdogan Looks Like Gollum: Dr. Bilgin Ciftci posted a photo collage comparing Turkish President Recep Tayyip Erdogan to Gollum from The Lord of the Rings, outraging the Erdogan government and Tolkien fans everywhere. Unlike Tolkien fans, Erdogan had the power to throw Ciftci in jail for his offense.

Insulting the president is considered actionable hate speech in Turkey, and not just in the “Obama rodeo clown” sense. Ciftci’s bid to escape an all-expenses-paid trip to the Mordor of Turkish prison hinged on arguing that Gollum is a tragic hero who finds redemption at the end of his story – followed moments later by incineration, but that is probably a detail the defense team did not linger upon.

A team of Lord of the Rings experts was brought in to assess the literary merits of the claim that comparing Erdogan to Gollum was not a felony insult. No less an expert than the director of the blockbuster Lord of the Rings films, Peter Jackson, chipped in by arguing that Erdogan’s Gollum-like facial expressions actually corresponded to the ruined hobbit’s “joyful, sweet” alter ego, Smeagol.

The defense also tried arguing that Erdogan was not actually the president when the controversial image was posted – he was merely prime minister at the time.

Dr. Ciftci, who lost his hospital job before the trial even began, was ultimately acquitted of the charges, avoiding a two-year jail sentence. However, another man who also compared Erdogan to Gollum, Rifat Cetin, was convicted for the same offense and given a one-year suspended prison sentence, accompanied by the loss of his parental rights. Ciftci and Cetin were among some 1,800 people accused by prosecutors of insulting Erdogan during his political career.

Cyberbullying in Indonesia: Indonesia’s online speech codes give prosecutors broad powers to pursue those who post “texts, pictures, videos, and memes deemed to incite fear or cause embarrassment.”

Somehow the concept of “cyberbullying” was stretched to include criticism of public officials and even complaining about lousy service at a hospital. It is even possible to “bully” an entire town, as 26-year-old law student Florence Sihombing discovered. Time Magazine reported in April 2015 that she was given a two-month jail sentence, six months’ probation, and a $770 fine for calling the town of Yogyakarta “poor, stupid, and uncultured,” and advising her friends to avoid the place. Apologizing profusely to the government and citizens of the town gained her nothing.

Another of the many social media prosecutions described by Time was the case of a 47-year-old mother of three, Wisni Yetty, who told a friend during a Facebook chat that her husband was abusing her. She got five months in prison and a $7,700 fine for defaming her husband, who knew about her remarks because he had hacked into her Facebook account.

The odd thing about Indonesia is that it prides itself on having a constitutional guarantee of free speech. The country’s draconian Electronic Information and Transaction Law wholeheartedly embraces an idea beloved of American leftists and repeated many times by CNN apologists over the past few days: “hate speech” is not protected free speech. The resulting legal regime can land you in jail for 100 days for hatefully accusing a politician of corruption.

Blogging Dangerously in Burma: Blogger Nay Phone Latt of Burma (now Myanmar) was arrested in 2008 for “disrupting security, stability, or the restoration of order” with his influential website, which had won praise around the world for speaking truth to power during the 2007 military crackdown. His offenses included publishing satirical cartoons of junta chief Than Shwe and possessing a recording of a banned comedy show.

He was given a total of twenty years in jail – an utterly horrid jail at that – but was released by a broad presidential amnesty order in 2012. He was 27 years old at the time of his sentencing. He was named to the Time 100 list in 2010, which turned out to be about halfway through his prison sentence. Time’s salute to the jailed activist was written by Salman Rushdie.

Myanmar was still jailing people for frisky exercises of free speech long after the military junta was (mostly) replaced by an elected government. In 2015, an activist was arrested for posting a photo of someone else stepping on a photo of the military commander-in-chief. Another online wiseguy was arrested for posting on Facebook that opposition leader Aung San Suu Kyi was wearing clothes of the same color as a military uniform.

Aung San Suu Kyi went on to lead the Myanmar government, while Nay Phone Latt won a seat in Parliament. Suu Kyi said this week that she was considering amendments to the draconian speech code. In theory, the law criminalizes the use of telecommunications systems to “extort, threaten, obstruct, defame, disturb, inappropriately influence or intimidate,” which probably sounds reasonable to Americans who have been falling out of love with free speech in recent years. 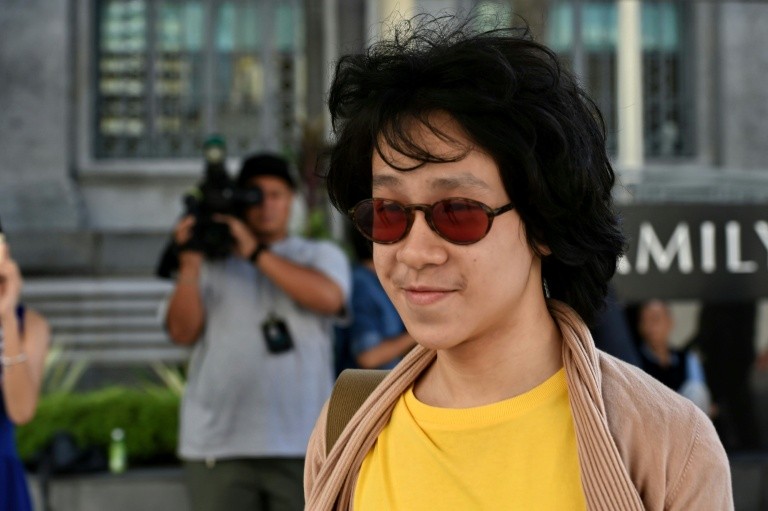 YouTube Video Puts Singapore Teen Behind Bars: 17-year-old Amos Yee was prosecuted in 2015 for criticizing a deceased politician, founding Prime Minister Lee Kuan Yew. One of the criticisms Lee leveled in a seven-minute video broadside was that people were afraid to criticize Yew. The government wasted no time justifying this criticism by prosecuting Yee for sedition.

Yee was also busted for hate speech offenses because he made “utterances against Christians” in a “deliberate intent to wound religious feelings,” as the lawyer who filed a complaint against him put it. The utterance in question accused Lee Kuan Yew’s followers of worshipping him like Jesus.

“There is a limit to freedom of speech. If the line separating freedom and offence is crossed, the person will have to face the consequences,” the lawyer explained – a sentiment that would get applause from the distressing number of Americans who think the First Amendment has some sort of invisible exception for “hateful” words.

As Amos Yee discovered, hate speech laws come in handy when the government wants to clobber politically inconvenient gadflies. He ended up fleeing to the world’s great redoubt of free expression, the United States, to seek asylum from his own country’s oppressive laws. A U.S. immigration judge granted his asylum request, but the decision is pending appeal from ICE and DHS to the dismay of human rights activists.

Singapore, by the way, is another country that boasts of a constitutional free speech guarantee. It just adds a few wee little restrictions to that freedom of expression in the interests of maintaining social harmony.

Chinese Blogger Jailed for Spreading Fake News: Of course, nobody is going to mistake China for a bastion of free speech, but it is useful to consider as a cautionary tale of where ostensibly reasonable limitations on free speech can take us. In 2014, China began jailing people for spreading “rumors” that “impact society and seriously harm social order.”

In other words, they threw a 30-year-old blogger named Qin Zhihui in jail for spreading Fake News on China’s version of Twitter. One of the reports that earned him a three-year prison sentence was the claim that Beijing had paid millions of dollars in hush money to a foreigner who died in a train crash. Another claim was that Chinese civil servants were being forced to make Red Cross donations to help China look more charitable.

Qin made a groveling apology under duress – “I crossed a red line, I seriously damaged the honor and reputation of others” – and claimed he didn’t know any of the information he circulated in some 3,000 allegedly libelous tweets was false, but it did him no good.

Hundreds of other bloggers were detained alongside Qin, for what critics saw as nakedly political reasons having more to do with the pride of the Communist Party than preserving social order – as if that would be a civilized justification for using tweets to throw somebody in jail for years. Another individual jailed in the “rumor” crackdown was Chinese-American blogger Charles Xue, but he was released on bail because he was in poor health and made an exceptionally moving public apology on Chinese state television.

Russian Pokemon Enthusiast Narrowly Avoids the Slammer: One of Russia’s most colorful free speech disasters involved a cheeky atheist blogger named Ruslan Sokolovsky, who posted a YouTube video of himself playing Pokemon Go in a church while mocking Christianity. Among other things, he described Jesus as the “rarest of Pokemons” and regretted his inability to catch him.

He wound up with a three-and-a-half-year suspended sentence plus 160 hours of community service under the same law that jailed two members of the girl band Pussy Riot in 2012 for staging a protest at a cathedral.

Some defended the prosecution of Sokolovsky by arguing that he behaved rudely in church and was aggressively violating a law he understood perfectly well. However, the charges against Sokolovsky were expressly about the video he uploaded and some other blog posts he wrote mocking the Russian Orthodox religion. His sentence included an order to remove nine videos from his YouTube channel and avoid mass gatherings for the entirety of his suspended sentence.

As Human Rights Watch notes, Sokolovsky was very specifically prosecuted for “insulting” the “religious feelings” of Russian Orthodox believers, which is not far removed from the evolving American idea that certain groups cannot be insulted. The Russian government has very extensive surveillance powers to carry out “insult” prosecutions. Moscow could definitely teach CNN a thing or two about doxxing the Little Guy.

Russian social media users have also learned that suggesting Crimea is part of Ukraine really, really, really hurts the feelings of people who can throw them in jail.

Pakistan Hands Down Death Sentence for Online “Blasphemy”: We’ll finish up by noting that Muslim countries often have harsh blasphemy laws that cover tweets and Facebook posts, but Pakistan took it to the next level in June by sentencing 30-year-old Taimoor Raza to death for using his cell phone to show “objectionable material” to people at a bus stop.

Raza also made the mistake of getting into a “sectarian debate” with someone on Facebook who turned out to be a government official. He made some sort of “derogatory remark about religious personalities” that would have netted him a two-year prison sentence, but then it was discovered that Mohammed was one of the religious personalities he made derogatory remarks about, and the death penalty came on the table.

According to Amnesty International, the verdict is Pakistan’s harshest yet for a cyber offense. Pakistan has never actually gone through with a blasphemy execution, but vigilantes often handle the dirty work after a sentence is handed down, and they don’t usually pay much attention to appeals or acquittals.

Islam is the acknowledged world leader in online blasphemy prosecutions, but it’s more than just Islam and the Russian Orthodox Church. Blasphemy laws are all the rage now. Once the door to “hate speech is not free speech” gets cracked open a bit, be ready for some very aggressive interests to come roaring through. Free expression has many adversaries, and they’re all convinced censorship is vital to maintaining social harmony. They just have different ideas about what needs to be censored.