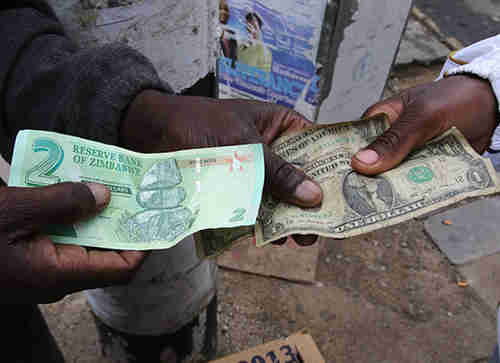 Zimbabwe’s president Robert Mugabe has banned the importation of fruit, vegetables, and other horticultural products, in order to avert a further economic crisis.

His Excellency [president Robert Mugabe] has directed me and the Minister of Industry and Commerce to quickly stop the importation of horticultural products as they waste much needed foreign currency. This means that the importation of fruit and vegetables will be stopped immediately. We are finalizing on the exact list of foreign-produced fruits that are occupying shelves in shops.

This must be a positive development for our farmers, we now want them to improve on their production capacity and also to produce quality produce. The foreign currency being wasted on the importation of carrots and grapes will now be utilized towards the purchase of more fertilizers and pesticides.

The reason that Zimbabwe’s farms have such low production capacity is because their current owners are almost all from Mugabe’s Shona tribe, and apparently are so incompetent that they do not know the difference between a plough and a tricycle.

Robert Mugabe is a genocidal psychopath, just like Syria’s Bashar al-Assad. Mugabe is from the Shona tribe, and in the early 1980s, he launched a massive genocide and ethnic cleansing campaign against his traditional tribal enemies, the Ndebele tribe. During that campaign, known as Operation Gukurahundi, accomplished with the help of training by North Koreans, tens of thousands of people, mostly from the Ndebele tribe, were raped, tortured and slaughtered.

In 1999, Mugabe adopted his “indigenization” program. At that time, Zimbabwe was considered the breadbasket of Africa, second only to Kenya in food production. Mugabe threw all the white farm owners out of the country and turned the farms over to his incompetent cronies in the Shona tribe. By 2003, Zimbabwe was starving, and the number of Zimbabweans dying of starvation continued to grow. By 2008, the official rate of inflation was 231 million percent. ( “24-Feb-2014 World View — Mass murderer Robert Mugabe of Zimbabwe has 90th birthday”)

For 15 years, I have been writing these articles about what is going on in the world and it just never ceases to amaze me about how psychopaths like Bashar al-Assad and Robert Mugabe can stay in power for years and decades, despite the unbelievable amount of destruction they cause. It is almost as if they have some magical hypnotic capability that keeps them in power, no matter how many atrocities are committed, no matter how many men are tortured, no matter how many women are raped, no matter how millions of people become homeless or are simply slaughtered. It is just a source of unending astonishment how this goes on and on.

And now, once again, Zimbabweans are fearful that the number of people starving to death is going to get even worse. Herald (Zimbabwe) and Reuters and AFP

Zimbabwe appears to be on the brink of an economic meltdown, after a currency panic that began on September 25, resulting in a 50 percent inflation of the new “bond note” currency, introduced in December of last year, supposedly to stabilize the economy.

In 2008, the inflation rate on the Zimbabwe dollar reached 231 million percent (231,000,000% inflation), essentially making the Zimbabwe dollar worth less than toilet paper. The US dollar and the South African rand became the official currencies. But Mugabe’s destruction of the economy continued, as he extended his “indigenization” program to other businesses, shutting them down and turning them over to his incompetent Shona cronies.

Just as Zimbabwe used to be able grow enormous amounts of food, the country’s economy should be bristling, thanks to its principal commodity exports, gold, platinum, tobacco, ferro chrome and diamonds. However, these businesses have been mostly turned over to Mugabe’s incompetent Shona cronies. Thanks to government corruption and falling commodity prices, Zimbabwe’s economy was in a liquidity crisis last year, due to a lack of available US dollars.

So to solve this problem, Zimbabwe introduced a new currency called “bond notes,” each one of which is nominally the value of one US dollar. Zimbabweans were told that the value of the bond notes would be guaranteed by Cairo-based African Export–Import Bank (Afreximbank). The details of how that guarantee would be executed have never been explained, and many people have been suspicious that the bond notes have nothing backing them at all (just like Bitcoin).

So there was a market panic starting on September 25 of this year, as people feared that the new “bond notes” were going to have the same type of hyperinflation as the old Zimbabwe dollar.

The bond notes lost 50 percent of their value and would have collapsed completely, except that Afreximbank stepped in and loaned Zimbabwe $600 million to stabilize the economy. $32 million of that money was used to pay off the electricity company Eskom, which was threatening to switch off electricity to the entire country for lack of payment.

The crisis appears to have eased, but bond notes are still suffering from inflation, with 1.3 bond notes now equivalent to one US dollar. And as long as Afreximbank is willing to continue pouring hundreds of millions of US dollars into Zimbabwe, the economy should remain fairly stable. Independent (Zimbabwe) and New Zimbabwe and Bulawayo (Zimbabwe)