The estimated production of opium and area under poppy cultivation has already reached unprecedented levels this year in Afghanistan, according to the United Nations.

The illicit drug and its deadly heroin derivative are fueling the Taliban’s strength and helping expand the group’s reach.

In its Afghanistan Opium Survey 2017, the U.N. Office on Drugs and Crime (UNODC) reports:

The 2017 record levels of opium poppy cultivation in Afghanistan create multiple challenges for the country, its neighbours and the many other countries that are transit for or destination of Afghan opiates. The significant levels of opium poppy cultivation and illicit trafficking of opiates will probably further fuel instability, insurgency and increase funding to terrorist groups in Afghanistan. More high quality, low cost heroin will reach consumer markets across the world, with increased consumption and related harms as a likely consequence.

The cultivation area is nearly 20 times the size of Washington, DC. 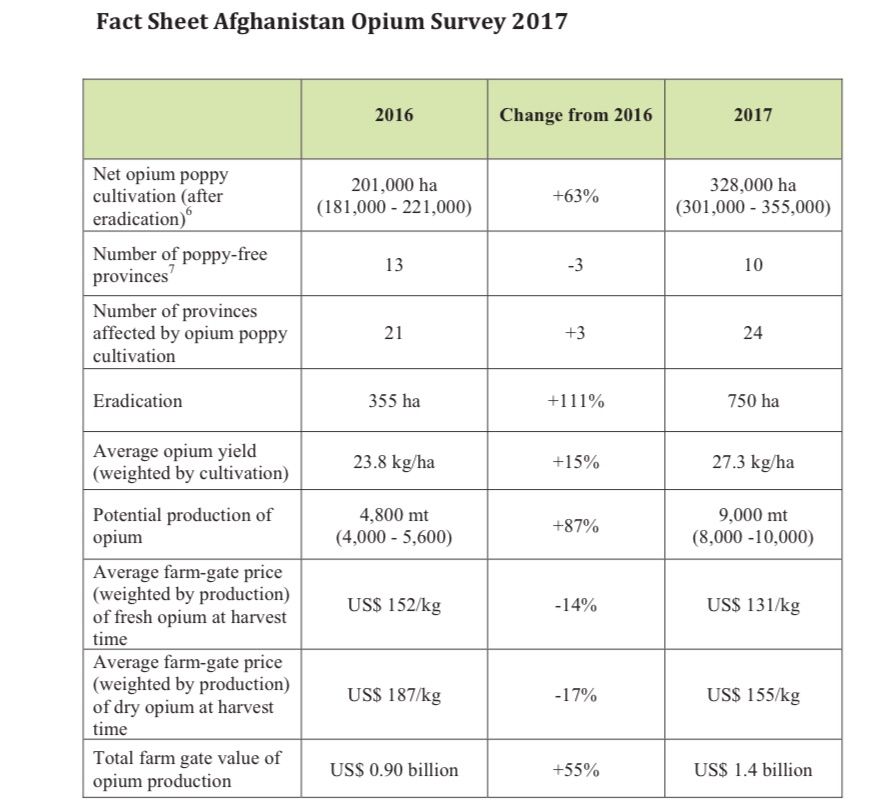 Afghanistan is currently producing nearly 50 times more opium than in 2001, when the United States invaded the country in an ongoing effort to defeat the Taliban and its al-Qaeda allies.

U.N. officials estimate that the war-ravaged country only produced 185 metric tons of opium in 2001 when the Taliban reportedly instituted a ban. 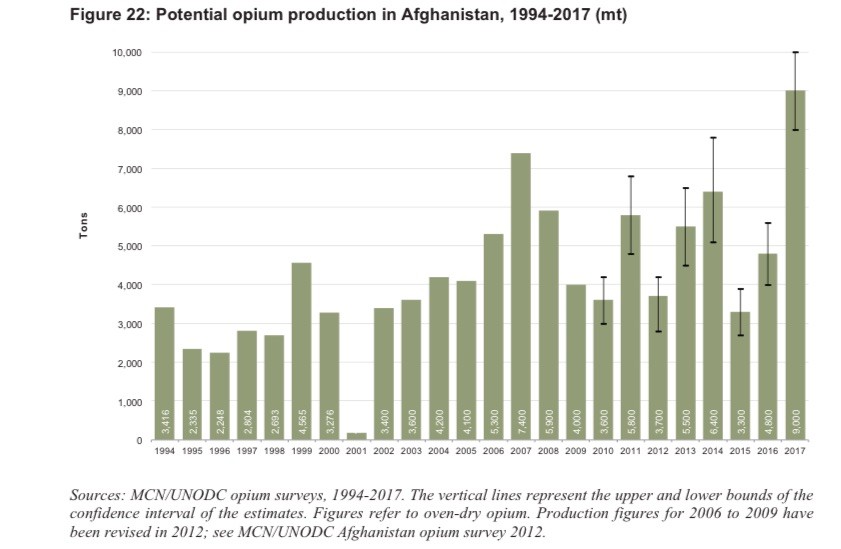 Despite the United States having devoted an estimated $8.6 billion to counter-narcotics efforts in Afghanistan since the war started in October 2001, poppy cultivation continues to rise and the country remains the world’s top producer of opium and heroin.

The U.N. identifies corruption, rule-of-law-related challenges, political instability, low levels of employment, and lack of government control and security as the “main drivers of illicit cultivation.” The report warns, however, that “there is no single reason” for it. 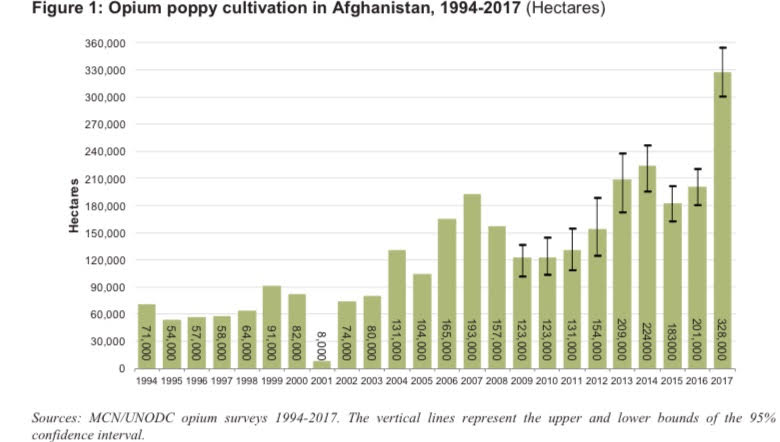 According to the U.S. military, the Taliban generates 60 percent of its estimated $400 million in annual revenue from trafficking opium and heroin.

The historic level of opium cultivation suggests the terrorist group will likely yield more funds from the illicit trade this year.

The New York Times (NYT) reports that the increase in production “means the Taliban have been able to take a greater share of the $60 billion that the global trade in the Afghan opium crop is estimated to be worth.”

Helmand, a Taliban stronghold along the Pakistan border in southern Afghanistan, remains the country’s “major opium poppy cultivating province,” accounting “for about half of the total national increase,” notes the U.N.

Taliban terrorists control most of Helmand (also spelled Hilmand), which sits next to Kandahar, the birthplace of the jihadist group.

Southern Afghanistan’s Helmand and Kandahar are the deadliest provinces for the U.S.-led coalition and Afghan forces.

Most (60 percent) of the cultivation is concentrated in southern Afghanistan along the Pakistan border.

Nangarhar is home to the leading Islamic State (ISIS/ISIL) stronghold in the Afghanistan region.

Opium production appears to be contributing to the significant increase in the Taliban’s strength, allowing the group to buy more weapons and ammunition.

“Without drugs, this war would have been long over,” Afghan President Ashraf Ghani said recently. “The heroin is a very important driver of this war.”

Opium cultivation and territory under the Taliban’s control has increased side-by-side.

The terrorist group currently holds more land than during any other time since the United States removed its regime in late 2001.

In a dramatic turn of events, poppy eradication more than doubled this year after the efforts nearly disappeared under former U.S. President Barack Obama’s watch.

“A total of 750 hectares of verified poppy eradication was carried out by the provincial Governors in 2017. This represented an increase of 111% from 2016 when 355 hectares of Governor-led eradication (GLE) was verified by [Afghan Ministry of Counter-Narcotics/U.N.],” notes the U.N.

Speaking as a private citizen, John Sopko, the chief of SIGAR, urged the U.S. government to probe the potential relationship between record production of opium in Afghanistan and the historic number of opioid-linked deaths in the United States.

As production in Afghanistan has skyrocketed, drug overdose deaths have reached record levels in America.

The DEA argues that only a small portion of Afghanistan heroin makes it into the United States.

However, American Gen. John Nicholson, the top commander of U.S. and NATO troops in Afghanistan, does not dispute that Afghan opium is contributing to the drug overdose fatalities in the United States.

During a congressional hearing in February, Sen. Angus King (I-ME) declared, “We’re losing four people an hour in this country … to overdose deaths; heroin, opium, grown in places like Afghanistan. If the fields in Afghanistan were terrorist camps, killing four people an hour in the United States they’d be gone.”
“I don’t want to make Afghanistan safe for shipping heroin to the United States,” he added.
Nicholson replied, “I agree with you and I support that.”