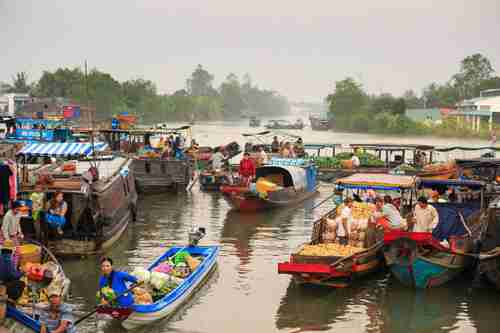 Multiple dams and hydropower projects being built in China on the Lancang Jiang River, which becomes the Mekong River when it leaves China, are having a significant effect on the livelihoods and living conditions of millions of people along the Mekong River in downstream countries. The Mekong originates on China’s Tibetan plateau and flows over 4,000 km through southern China, Myanmar, Laos, Thailand, Cambodia, and Vietnam.

China has already built six dams along the river, and 11 more are under construction, with 28 more dams planned in the future. These large dams upset the ecosystem and threaten the livelihoods for an estimated 60 million farmers and fishermen living in the lower Mekong basin, where it nurtures one of the world’s most fertile areas for agriculture and fishing. Thailand and Vietnam are among the world’s largest producers of food commodities like rice. Not only do China’s dams affect the water available for irrigation, they disrupt the migration of fish and block the flow of silt downstream that sustains riverine environments.

However, this goes beyond ecology. These dams give China control over the Mekong River, which means that China can use them as leverage to control much of the economy of Southeast Asia.

So now a similar dynamic is occurring along the Mekong River. China has been building these dams and hydroelectric projects without concern for the five downstream nations. Furthermore, China controls water flow according to its own needs, even if it means starving or flooding downstream inhabitants. China’s attitude towards its neighbors is not surprising. After all, China displaced millions of its own people to build the Three Gorges Dam, so China’s leaders really couldn’t care less about people in other countries.

China’s dams have been blamed for several droughts along the Mekong delta in recent years. China claims that those droughts were all caused by natural weather changes, but the perception remains that China is causing the droughts. Furthermore, China’s dam building has negatively affected fishery stocks in the river. Once again, China claims it’s not responsible, but when fishermen are unable to fish, they are going to blame China.

China’s plans do not stop there. China is using its control of the water as leverage to force downstream countries to allow it to clear small islands and land features along the entire length of the river, calling this “navigation channel improvement.” This will permit commercial and military vessels weighing up to 500 metric tons to travel along the river from China to the South China Sea.

In 1995, Thailand, Laos, Cambodia, and Vietnam formed the Mekong River Commission (MRC) as a forum for managing changes to the river. China refused to join the MRC, to avoid being bound by its requirement that developments require consultations with the other members. Instead, China in 2015 formed a new organization of the four MRC nations plus Myanmar, the Lancang-Mekong Cooperation (LMC), which it controls. South China Morning Post and Foreign Policy and Jamestown and Cambodia Daily (17-Jan-2017)

In policy shift, US sides with Indonesia in South China Sea over Natuna Sea

As we reported in September, Indonesia announced that it would rename the part of the South China Sea within its own exclusive economic zone (EEZ) as the “North Natuna Sea,” causing China to throw a temper tantrum. ( “10-Sep-17 World View — China demands that Indonesia end plans to rename its own territorial waters”)

The U.S. has so far stayed completely out of this particular dispute, but on Tuesday U.S. Secretary of Defense James Mattis, in a meeting in Jakarta with Indonesia’s Defense Minister Ryamizard Ryacudu, said the United States would help Indonesia play a central role in the region, and would help it to maintain maritime security in the “North Natuna Sea.” This use of the phrase “North Natuna Sea” is being considered a US endorsement of Indonesia’s position.

It should be noted that the waters under discussion here are part of Indonesia’s EEZ, but are far, far, far away from China. Most of China’s claims have been labeled as invalid by the United Nations Permanent Court of Arbitration in the Hague, but this particular claim by China is clearly completely delusional, as can be seen on any map.

The Trump administration is becoming increasingly confrontational with China’s illegal claims in the South China Sea. There are regular FONOPs (Freedom of navigation operations) in the South China Sea, where a U.S. warship travels through international waters illegal claimed by China, causing China to throw more temper tantrums. The endorsement of Indonesia’s claim to the “North Natuna Sea” is one more step on that path. UPI and South China Morning Post