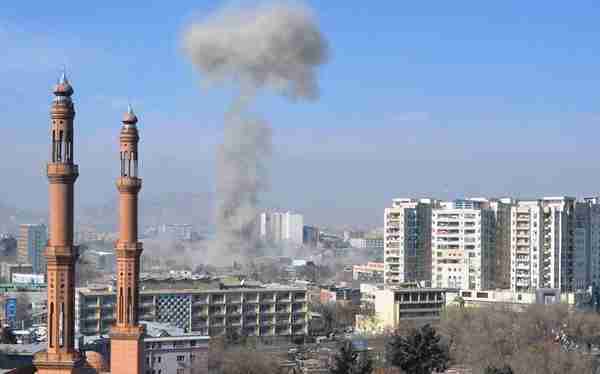 Exactly one week after a spectacular 16-hour siege by the Taliban of the Intercontinental Hotel in Afghanistan’s capital city Kabul, killing dozens, a new suicide bomber struck on Saturday.

The new attack was a massive bombing by a suicide attacker in an ambulance that killed at least 95 people and wounded 158, almost all innocent civilians. The ambulance got through security checkpoints by claiming that he was carrying a person to a hospital. When one checkpoint officer got suspicious, the driver blew up the ambulance, which was full of explosives.

The Taliban have not yet claimed responsibility for this attack because of the bad PR they get when they kill innocent civilians. It is suspected that the ambulance driver was trying to reach the Interior Ministry building in order to kill government officials.

Both last week’s attack and this one occurred in areas that are supposed to be under heavy security. Government officials are coming under heavy public criticism for being unable to prevent these attacks. Tolo News (Kabul) and Khaama Press (Kabul)

Trump doubles down on war on Taliban in Afghanistan

I condemn the despicable car bombing attack in Kabul today that has left scores of innocent civilians dead and hundreds injured. This murderous attack renews our resolve and that of our Afghan partners.

The Taliban’s cruelty will not prevail. The United States is committed to a secure Afghanistan that is free from terrorists who would target Americans, our allies, and anyone who does not share their wicked ideology. Now, all countries should take decisive action against the Taliban and the terrorist infrastructure that supports them.

The idea of defeating the Taliban is fantasy, for reasons I have reported many times in the past.

Afghanistan’s last generational crisis war was the extremely bloody Afghan crisis civil war, 1991-96, which mostly pitted the ethnic Pashtuns, who are Sunni Muslims and later formed the Taliban, versus the Northern Alliance of Tajiks, Hazaras, and Uzbeks in northern Afghanistan. Now, twenty years later, Afghanistan is in a generational Awakening era, and a new young generation of Pashtuns is coming of age, raised on stories their parents told them about the atrocities committed by the Northern Alliance, and they are looking for revenge.

This rising generation of young terrorist Pashtuns cannot be defeated by any conventional or unconventional army. They are capable of forming cells, living off the land, and conducting terror attacks at any time, targeting the government and the ethnic groups in the Northern Alliance. What Trump calls “the Taliban’s cruelty” is actually their revenge for the atrocities that were committed against their parents over 20 years ago. This is not going to end because of some piece of paper drawn up by government ministers in Kabul, and anyone who thinks so is living in a world of total fantasy.

In August of last year, Trump gave an Afghanistan strategy speech announcing that some 4,000 more American troops would be sent to Afghanistan, in order to achieve “victory.”

As I described at the time, Trump promised victory by redefining “victory”:

Our troops will fight to win. We will fight to win. From now on, victory will have a clear definition: attacking our enemies, obliterating ISIS, crushing al Qaeda, preventing the Taliban from taking over Afghanistan, and stopping mass terror attacks against America before they emerge.

When you think about it, this definition of “victory” has already been almost completely achieved. Going down the list, we attack our enemies, ISIS has been defeated in Syria and Iraq, al-Qaeda has been at least partially crushed, the Taliban are not taking over Afghanistan, and there haven’t been any mass terror attacks against America.

But this definition of “victory” does not say anything about bringing peace to Afghanistan, nor does it promise an end to terror suicide bomber attacks in Kabul. As far as Trump’s definition of victory in Afghanistan is concerned, it is pretty much already been achieved, despite Saturday’s bombing.

As I have written in the past, Trump appears to have a larger purpose in mind. As war with China and Pakistan approaches, Trump wants to keep American troops active in Afghanistan and to continue to maintain several American military bases in Afghanistan, including two air bases in Bagram and Kandahar International Airport. These bases will be valuable in any future war with China. Under these circumstances, having troops in Afghanistan is what matters, whether the Taliban are defeated or not. Fox News and India Today and CBS News