A Chilean lay Catholic group has sharply criticized Pope Francis for defending Bishop Juan Barros while claiming he had no knowledge of sex abuse charges involving a cover-up by the bishop.

Juan Carlos Claret, a spokesman for the association Laicos de Osorno, said on Monday that the pope would have to explain “who decided to constantly discredit the testimony of the victims,” since it is no longer “possible to maintain, as some do, that the pope didn’t know and that he had slanted information.”

On Monday, the Associated Press (AP) revealed that Pope Francis heard about the abuse problem in graphic detail from a victim in 2015, despite the pope’s recent insistence that he had no knowledge of the allegations.

Sex abuse victims claim that Bishop Barros not only defended Father Fernando Karadima, a priest who was sanctioned by the Vatican in 2011 for the sexual abuse of minors, but that Barros had first-hand knowledge of the abuse, having personally been a party to it.

During a press conference aboard the papal plane returning to Rome from Chile and Peru last month, Francis said he had never heard from victims about Barros’ behavior.

Nevertheless, Boston Cardinal Sean O’Malley reportedly hand-delivered an 8-page letter from Chilean abuse victim Juan Carlos Cruz to the pope in 2015, after members of the pope’s Commission for the Protection of Minors flew to Rome to personally deliver the letter. The letter laid out in graphic detail how Father Karadima sexually abused Cruz and how Church authorities had knowledge of the abuse but ignored it.

In his letter, Cruz complained of a homo-erotic circle of priests and boys around Father Karadima, in which Barros himself participated. Cruz explicitly accuses Barros, who had been a protégé of Father Karadima, of carrying on an openly homosexual relationship with the priest and of being present for the abuse of the boys around him.

“More difficult and tough was when we were in Karadima’s room and Juan Barros — if he wasn’t kissing Karadima — would watch when Karadima would touch us — the minors — and make us kiss him, saying: ‘Put your mouth near mine and stick out your tongue.’ He would stick his out and kiss us with his tongue,” Cruz wrote. “Juan Barros was a witness to all this innumerable times, not just with me but with others as well.”

“Juan Barros covered up everything that I have told you,” he wrote to the pope.

The members of the abuse commission wanted to voice their objections to Francis’ appointment of Barros as a bishop of Osorno, in southern Chile, which also occasioned the writing of the letter. Francis appointed Barros over the objections of the leadership of the Chilean bishops’ conference as well as many local priests and laity. 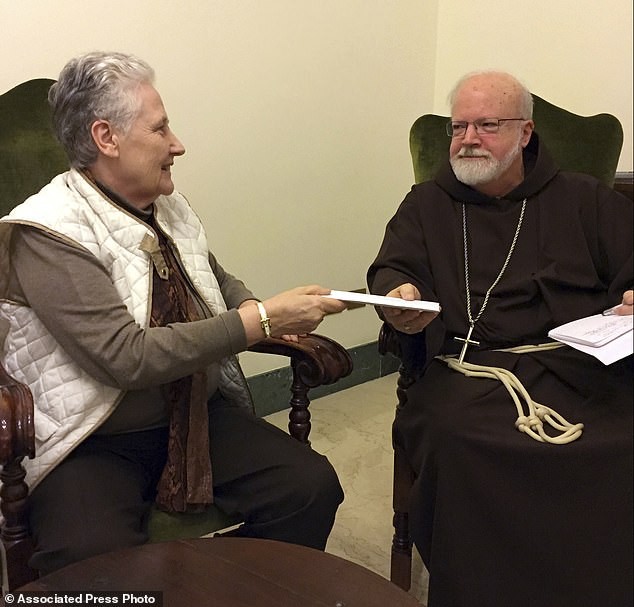 Marie Collins, a member of the pope’s sex-abuse commission, hands a letter to Cardinal Sean O’Malley detailing the abuse of Juan Carlos Cruz and a cover-up by Chilean church authorities, at the Domus Santa Marta on April 12, 2015. Commission members and Cruz say O’Malley later confirmed he gave the letter to a Pope Francis, contradicting the pope’s recent insistence that no victims had come forward. (Catherine Bonnet via AP)

During his trip to South America last month, Pope Francis dismissed accusations against Barros as “slander,” apparently unaware that victims had placed Barros at the scene of Karadima’s crimes.

“The day they bring me proof against Bishop Barros, then I’ll say something,” the pope said during the Chile portion of his trip. “There isn’t a single proof against him, everything is slander,” the pontiff told reporters.

Later, on the plane trip home, the pope insisted that there was no evidence against Barros because no victims had come forward to accuse him of anything.

“No one has come forward, they haven’t provided any evidence for a judgment,” Francis said. “This is all a bit vague, it’s something that can’t be accepted. You, in all good will, tell me that there are victims, but I haven’t seen any, because they haven’t come forward,” he told one reporter.

“I cannot convict him, because I have no evidence; but I am also convinced that he is innocent,” he told another.

Commission member Marie Collins told the AP that when they gave O’Malley the letter for the pope, “he assured us he would give it to the pope and speak of the concerns.” She added that “at a later date, he assured us that that had been done.”

Cruz himself said that Cardinal O’Malley had called him after the pope’s visit to Philadelphia in 2015 and told him that that he had placed the letter in the pope’s hands.

Last week the Vatican finally announced it would open a formal investigation to obtain testimony from Cruz and others about Bishop Barros.