Eight soldiers died and 12 were seriously wounded on Friday by a major terrorist attack in Ouagadougou, the capital city of Burkina Faso, on the army headquarters and the French embassy. Eight attackers were also killed. Burkina Faso is a landlocked nation in West Africa and one of the poorest countries in the world.

The al-Qaeda linked Jama’at Nusrat al-Islam wal-Muslim (JNIM, Group for Support of Islam and Muslims) claimed responsibility for the attack. JNIM was formed in 2017 by a merger of four Mali-based al-Qaeda linked groups, including Ansar Dine, Al-Qaeda in the Islamic Maghreb (AQIM), Al Murabitoon, and Katibat Macina (Macina Liberation Front). These groups were responsible for a surge of hundreds of al-Qaeda linked attacks in Africa’s Sahel (the strip of Africa just below the Sahara desert, separating the Arab north from Black Africa to the south), including Mali, Niger and Burkina Faso.

Burkinabe president Roch Kabore urged the public to be calm on Saturday: “In these difficult moments, I would like to reaffirm to Africa and the entire world my unshakeable faith in the capacity of the Burkinabe people to preserve their dignity and ferociously oppose their enemies.”

Although there were no French casualties, it is thought that the attack was meant to target France’s Operation Barkhane, which was launched in August 2014 and has been effective in targeting al-Qaeda linked terror groups throughout the region.

However, not surprisingly, many people believe that the level of terrorism is increasing in the region, despite the deployment of these counter-terrorism forces. Radio France International and Deutsche Welle and Reuters and AP

Iraq is strategically important to China’s government, military, and the “One Belt, One Road” grand strategy that supposedly will link everything in Europe and Asia to China by 2050. Any relationship in the Middle East is important to China also because of China’s enormous thirst for imported oil.

China is the world’s biggest importer of oil. Any shortage of oil in China could trigger a hard recession in China and lead to unrest. Iraq represents a major opportunity to increase the flow of oil imports.

In January, it emerged that China intended to construct an oil refinery on the port of Fao on the Arabian Gulf with two Chinese companies, Power China and Nerco Chinese. The refinery would have a capacity to produce 300,000 barrels per day. Iraq has also just awarded a control China-based Zhenhua Oil to further develop Iraq’s East Baghdad oilfield. Chinese state-owned enterprises are now the biggest oil investors in Iraq, especially the modernization and development of Iraq’s oil infrastructure.

Iraq’s oil refining capacity was curtailed when the so-called Islamic State (IS or ISIS or ISIL or Daesh) overran much of northern Iraq in 2014. Iraq has been recovering, and is now OPEC’s second-largest oil producer, after Saudi Arabia.

Ironically, both Iraq and Saudi Arabia are restricted in the amount of oil that they can sell to China. The reason is that the OPEC countries have agreed to production limits in order to keep the price of oil from falling. Arab News and Reuters and Xinhua 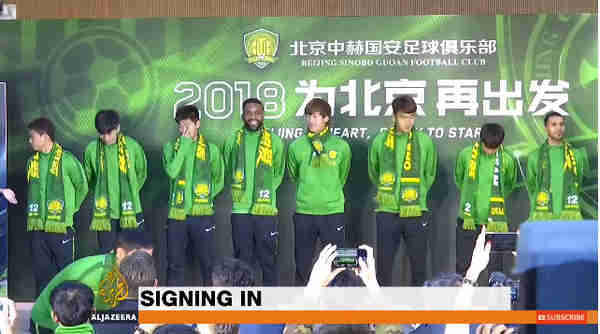 China’s Sinobo Guoan Football (Soccer) Club has paid a reported amount of $91 million to sign Cédric Bakambu, making Bakambu the most expensive soccer player in African history. He was born in France but switched his allegiance to the Democratic Republic of Congo in 2015.

The reason that I am including this story is because of the startling screenshot above, which was from Bakambu’s televised introduction on Chinese television. The screenshot shows eight people on the team, with Bakambu in the middle in the fourth position. I don’t know who all these people are, but the people in positions #5 and #8 appear to be European.

This video was broadcast on al-Jazeera, and as I watched it I found it really startling. China is known to have some extreme racism issues with Africans, and this screenshot seems to put them on display. BBC Sport