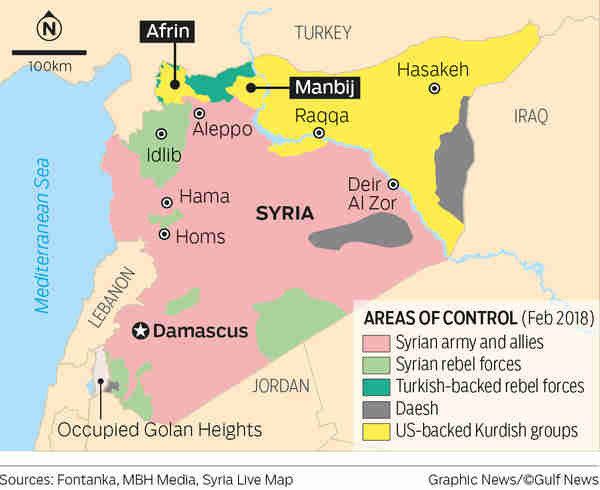 Turkish-backed FSA forces are fighting Kurds in Afrin, who will be helped by Kurdish forces in Manbij traveling to Afrin (AFP)

The war in Syria escalated again on Tuesday when militias in the Kurdish People’s Protection Units (YPG) fighting ISIS in eastern Syria announced that most of their fighters would abandon the first against ISIS, and would travel to Afrin to oppose Turkish-supported forces seeking to eject the YPG forces there.

The YPG forces in eastern Syria said that 1,700 fighters would stop fighting the so-called Islamic State (IS or ISIS or ISIL or Daesh) in eastern Syria, and would move to Afrin to fight the Turkish-backed Free Syrian Army (FSA). The FSA is trying to take control of Afrin from the YPG.

The so-called “Operation Olive Branch” was launched by Turkey on January 20 and was supposed to take control of Afrin within a few days. After that, the original plan was that the FSA would then move east, and similarly take control of Manbij from the YPG. It was never clear how that would work since there are about 2,000 US special forces in Manbij.

At any rate, Turkey is still bogged down in Afrin, although Turkish officials say that victory is close. There are a couple of reasons that analysts have been giving to explain the problems that Turkey is facing. First, it is said that the YPG forces are battle-hardened from having fought ISIS. And second, it is said that Turkey’s army has been decimated by the massive firings of army leaders following the botched coup by the army in June 2016.

Whatever the reason, the fact that 1,700 YPG fighters from the Euphrates River Valley are coming to Afrin to fight the Turkish forces can only add to Turkey’s problems. Turkey is blaming the United States and is demanding that the U.S. block the YPG forces from going to Afrin, but it is far from clear that the U.S. has the ability to stop them. CNN and AFP and Al-Monitor and Reuters

Reports of Free Syrian Army atrocities on Kurds in Afrin

Reports are mounting that the Turkish-back Arab militias in the Free Syrian Army (FSA) are committing atrocities in Afrin, taking revenge against the YPG Kurds for the latter’s atrocities against innocent Arabs during last year’s YPG fight against ISIS.

Kurdish forces are said to have razed a number of Arab-majority villages in eastern Syria during the clashes with ISIS. One Arab is quoted as saying, “They killed dozens of members of our extended family, bulldozed our homes and joked that they would plant potatoes there.”

Now that Kurdish forces from the east are traveling to fight Arab militias in Afrin who are looking for revenge, there will probably be plenty of atrocities on both sides.

As I’ve written many times, Generational Dynamics predicts that the Mideast is headed for a major regional war, pitting Sunnis versus Shias, Jews versus Arabs, and various ethnic groups against each other. Generational Dynamics predicts that in the approaching Clash of Civilizations world war, the “axis” of China, Pakistan and the Sunni Muslim countries will be pitted against the “allies,” the US, India, Russia, and Iran. Gulf News and Guardian (London)

Mahmoud Abbas may step down as Palestinian Authority president

There have been sporadic stories for years that Palestinian Authority (PA) president Mahmoud Abbas was in declining health and would soon step down. Recently, those reports seem to have become more serious, and there is a succession battle brewing among the Palestinians.

Mahmoud Abbas, 82, was born in 1935 and lived through World War II and the bloody wars between Jews and Arabs that followed the 1948 partitioning of Palestine and the creation of the state of Israel. Having lived through that horrific war, Abbas has been a major force in maintaining a semblance of peace between the Palestinians and Israelis.

Abbas himself has become increasingly belligerent in recent weeks after the United States recognized Jerusalem as the capital of Israel. There have been stories of a new peace plan being drawn up by the Donald Trump administration, but in view of the irrelevance of Abbas, even if he agreed to it the vast majority of Palestinians probably would not.

If Abbas is replaced as PA president, the successor would almost certainly be much younger, and would probably have the same attitudes as the young Palestinians who have no fear of all-out war with Israel. Al-Monitor